Last week’s episode of Good Trouble ended with Jamie wrapping Callie in his arms, in the Coterie pool, and asking her to seriously consider moving in with him. It’s a tempting prospect — Jamie has an amazing apartment with a spectacular view and an espresso machine built right into the wall — but Callie gently turns him down. Despite that fact that Mariana sometimes drives her crazy, Callie wants this time with her sister before they head down different paths. She relishes the chosen family she’s created at the Coterie.

“I didn’t know you were that close to anyone, besides your sister,” Jamie admits.

“I’m friends with Malika, I’m close-ish with Alice and Davia,” Callie answers. “I like how [the Coterie] feels like home.” 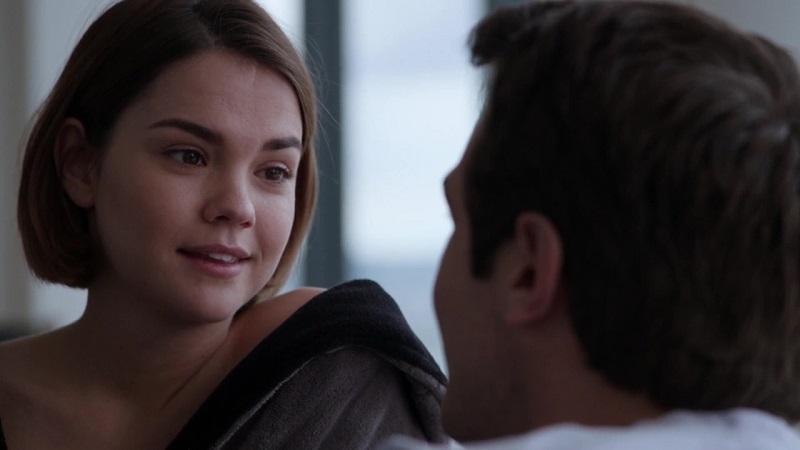 At first, I assume that Callie’s saying these things for Jamie’s benefit… after all, she certainly can’t tell him that she wants to stay at the Coterie to continue her wistful pining for Gael. But, as the episode draws to a conclusion, Callie happens upon the transcript of a chat between Malika, Davia, Mariana and Alice that’s both petty — all this over a coffee cup? — and unkind. As Callie watches the insults roll in, her face breaks a little and it’s clear she’s hurt… and I realize that we were supposed to take her seriously earlier. She was being serious when she touted her friendships with Malika, Alice and Davia, and when she said that the Coterie felt like home. We’re supposed feel her pain as she watches her fellow Coterie members drag her in their chat because she was so close to these people.

Perhaps Callie’s built these deep meaningful relationships with Alice, Davia and Malika off-screen but on-screen, we haven’t seen that. Though she’s shared a few scenes with Malika, she’s never spent time socially with Malika, Davia and Alice in the way that Mariana has. Davia was #TeamBryan in the Bryan/Gael/Callie love triangle so they’ve always had an antagonistic relationship.

A few episodes ago, when Davia reached out to Callie for advice on her relationship with Jeff, she did so not because they’re “close-ish” but because there was, literally, no one else there to ask. And, as far as I can recall, Alice and Callie haven’t share a solo scene through 20 episodes of Good Trouble. Callie’s free time at the Coterie has been about her relationship with Gael — she admitted as much last season — and that’s why she failed the bar. It doesn’t make sense for Good Trouble to retcon these friendships that don’t actually exist.

What would be more interesting to me — and the path I hope Good Trouble is headed down — is having Callie confront the ways she sees herself versus the ways other people see her, as that’s been an issue of both her personal and professional lives recently. After five seasons of watching Callie on The Fosters, it’s hard for me to imagine anyone calling her cold but, on Good Trouble, Davia calls her Elsa and, honestly, it feels apt. At work, she’s having to fend off accusations that she’s entitled and her efforts to do way too much have only drawn Marcus’ ire. But self-reflection doesn’t always make for good drama so we’ll see what happens.

Elsewhere at the Coterie… 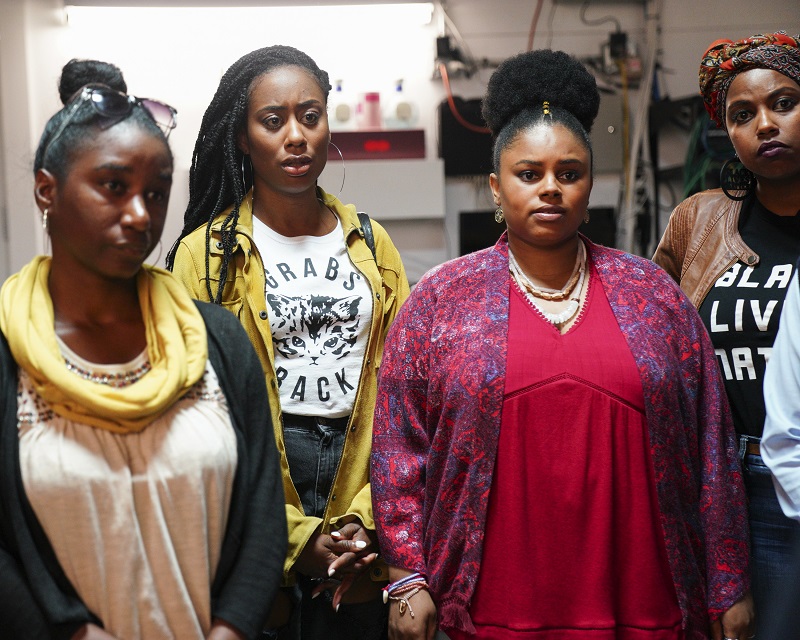 Malika’s asked to pick a side…and she chooses liberation.

With her graduation imminent, Malika is ready to move onto the next phase in her life, starting with finding a new job. She’s got her heart set on a marketing gig at Panoptic Threads, a company incorporates Malika’s passion for justice and inclusivity into their brand. She aces the interview and, though her interviewers need to consult with their team first, it seems like the job is Malika’s for the taking. But after a deep dive into her social media, Panoptic offers Malika the job, on the condition that she temper her public Black Lives Matter activism. She can support the cause, of course, but they want her to refrain from posting or retweeting anything BLM related.

The conditional offer comes just as Malika had been ramping up her involvement in Black Lives Matter. The group is planning a disruption in the next few days — exactly the sort of direct action that Malika had hoped to participate in — and needs new faces, like Malika’s, to mitigate the interactions with police.

“I don’t know how to work for a company that sells itself as being socially conscious but doesn’t want to be too political or polarizing, especially when it comes to black liberation,” Malika admits.

Isaac comes through with the sage advice as someone who’s been where Malika is now: one day, the time will come when she won’t have to play other people’s political games but for right now, he advises Malika to play the long game. Isaac points out that her success, as unlikely as it is, given all that she’s gone through in her life, is a form of protest, even if it doesn’t look like the kind she’s used to. But, of course, Malika’s heart is connected to the movement…to Christopher DeAndre Mitchell and to Wakiesha Wilson and to Jamal Thompson, and she retweets a post in defiance of Panoptic’s social media policy. Looks like Malika will be keeping her bartending job for a little bit longer. 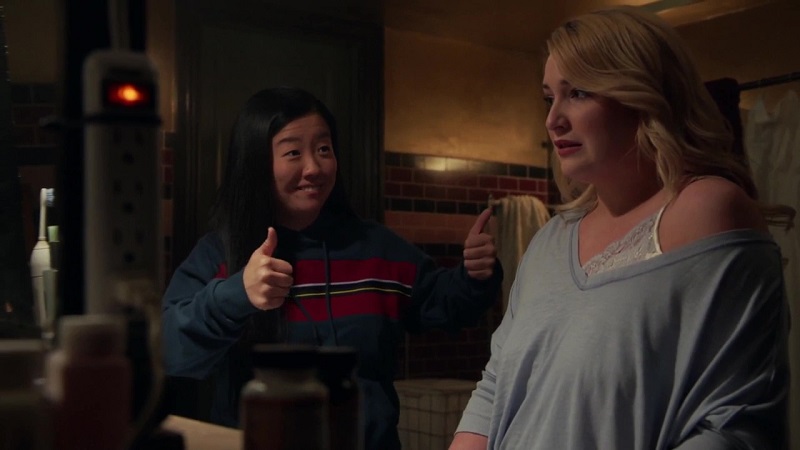 Meanwhile, Jeff’s in town and, despite her feelings for Dennis, Davia shares his bed for the night. But when Jeff relishes a future that includes many more moments of post-coital bliss, Davia has a change of heart. She confesses to Jeff that she’s fallen out of love with him and regrets, but doesn’t apologize, that the realization didn’t come sooner. Jeff is irate, angry that he lost everything for a relationship that no longer exists. But in the list of things that he’s lost, his wife and love are never mentioned, underscoring Davia’s point that, with or without her, his marriage was doomed to fail anyway. But Jeff’s not interested in Davia’s explanations or her assurances that he’ll find someone new who loves him and he kicks her out of his hotel room.

When Davia returns to the Coterie, she has a run-in with Dennis in the communal kitchen. The tension between them is thick but neither try to address it. As soon as he treats back to his loft, the emotions of the last few days start to bubble to the surface. Then, when Alice asks about Davia’s recent concern over Dennis, those bubbles burst. Stunned by Davia’s reaction, Alice tries to figure out the right thing to say but she gets no answers, only more of Davia’s sobs.

Once alone in Alice’s loft, Davia admits that she loves Dennis but that she was reticent to break up with Jeff because she was afraid no one else would ever love her (thanks for that, Mom!). She knows that Dennis loves her as a friend but worries she’s not his type. Alice assures Davia that she’s beautiful but, of course, Davia knows that.

“I said I was fat, not ugly,” she answers, which is a whole ass mood. “Just because I’ve learned to love my body doesn’t mean that Dennis ever could.”

When Alice brings up Jeff, as proof that Davia’s body is lovable, Davia relays the story of what happened with him earlier. Still, Alice encourages Davia to tell Dennis the truth even though she’s worried about losing her friendship with Dennis.

Alice takes it upon herself to play wingwoman, to hilarious effect, confronting Dennis in the Coterie bathroom about his performance with Davia at Malika’s party. Dennis is impenetrable — he may be the one person at the Coterie that’s capable of keeping a secret — and so Alice is forced to be more direct: does he have feelings for Davia or not? Dennis remains evasive but he’s not dismissive of the idea which is enough evidence for Alice. She rushes and tells Davia that Dennis is in love with her.

Or, at least she’s pretty sure he’s is. It’s enough reassurance for Davia that she decides to go tell Dennis how she feels. Fingers crossed that goes well…I am unusually invested in these straights.

Next week: The Summer Finale! Shit hits the fan!