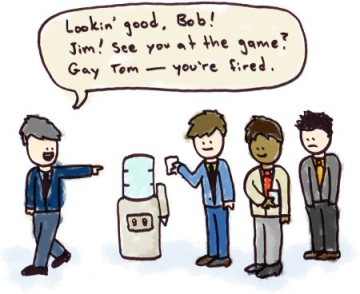 It’s always been hard out here for queers in the job market, especially so if you’re visibly marked as gay/lesbian/butch/trans/genderqueer/what have you. The recession has only made that worse; it’s harder than ever to find a job, and harder to draw any attention to the ways in which we’re discriminated against when dominant groups are more interested in their own rising unemployment rates than our consistently disappointing ones. But even with rough economic times, queers looking for work have an advantage that straight people don’t: the slow but inevitable march of progress.

In Boston, HRC is launching a new initiative to help trans people find work, a series of “Back To Work” seminars intended to help trans job seekers with essential skills to compensate for the deep prejudice against them in the employment process. Participants will be trained on preparing a resume, researching the job market, building a professional network and interviewing techniques. The seminars will be led by the Foundation for New Directions, a transgender-owned career coaching organization based in Atlanta. The idea of the project is twofold: to try to combat the transphobia that permeates the job market, and to highlight efforts to pass ENDA in Massachusetts. One initiative won’t change the environment of the job market in America, but it may help individuals at least in the short term, and until the revolution comes that’s saying a lot.

Speaking of deeply prejudiced workplaces, few people know about them better than the gay, lesbian and trans steelworkers that researcher Anne Balay is studying in Indiana. She’s looking for only 40 of them to interview for her research project, and after hitting every gay bar she can find she’s still only come up with 17 who are willing to sign a consent form to have their stories included in her project. Their statements are incredibly compelling, and sometimes heartbreaking.

She interviewed one gay woman who was raped by several men, simply for being gay.

“She hasn’t talked about it for 30 years but she said she knows there’s a God because she remembers praying that she wouldn’t remember what happened that day, and she hasn’t,” Balay said. “Like I said, these people are simply amazing.”

But their stories are being honored in her work, and the more that’s known and documented about the lives queer people have led in traditionally “straight”/highly gendered fields, the brighter the future is for others, and for the rest of us. Virtually none of the people she’s spoken with are out, because steelworking is not something gay people do. But when we write about all the gay people who are doing it, our collective perception begins to change, and reality changes with it.

“You are out here doing jobs and living your lives. But in all the histories of steelworkers, you are invisible. This is your chance to change that,” states an eye-catching flier she hands out in public. “You will become a part of history.”

So what’s the takeaway? The present is murky, but the future is bright. We’re not the only ones who think so; queers are roughly 50% more likely than straight people to be optimistic about their financial futures. 35% of queers as opposed to 29% of straight people said they expected our collective financial situation to improve. “Same-sex couples and their families, in fact, have a more fragile safety net today under existing outdated laws and unequal policies. Nonetheless, they increasingly believe, more than others, that this recovery is becoming real and tangible.” We know it will; for straight people who have experienced privilege in the job market their entire lives, this must feel like the world is ending. For people who started with nothing – or more specifically who started out having to lie about everything inside themselves in order to feed themselves and their families – well, we know better. We can only move forward; we will work hard and fight for change, as we always have, and things will get better. There’s nothing like knowing the worst that things can possibly get to see how good the future can be.