Previously on Glee, Riese pointed out the faulty logic of the lyrics to that song “Cool Kids” and now every time it comes on the radio I start yelling. Also, the New New New Directions all got storylines, for the first and last time ever, because this thing is done in two weeks and surely to God the last few episodes are going to give Rachel Berry — the main character since day one — the ending she deserves.

This episode is called “The Rise and Fall of Sue Sylvester” and it makes less sense than most things Glee has ever done, and I am including: Tina losing her stutter, Terri Schuester faking her pregnancy, Quinn plotting to kidnap her baby while the father of her baby sleeps with the woman who adopted their baby who is also Rachel’s birth mom and the leader of the rival show choir, Quinn getting paralyzed one second and dancing at prom the next second, the Acafellas, Kurt not getting into NYADA on his first try, and Teen Jesus getting a boner helping Quinn do physical therapy. Okay, fine. That last thing is valid. 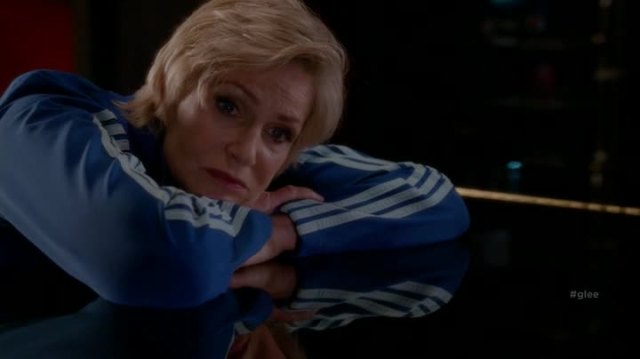 I’m better than this. 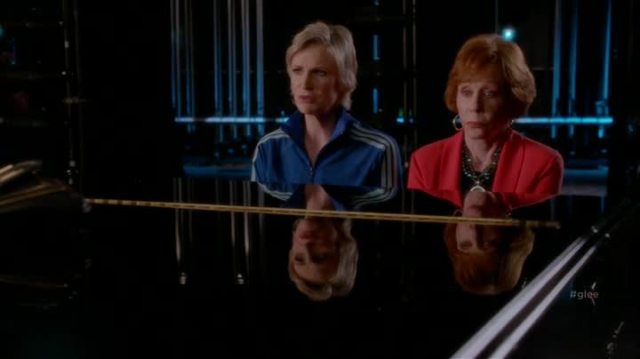 You are. But sometimes you gotta dance with the one that brought ya.

As a story, especially as a story at this point in the final season, it feels like a dumb filler episode. But as a farewell for Jane Lynch, it feels justified. She has sold every single line of dialogue they have thrown at her right up until the very end, and she snagged some well deserved trophies along the way. Remember when she was a guest star on The L Word? Remember when she was Nurse No. 2 on Gilmore Girls? She’s come a long way! She’s played opposite of Meryl Streep! She’s been on real Broadway! She hosts her own gameshow! She’s voiced so many cool animated characters! She’s already signed on to headline a new CBS comedy! Sue’s schtick should have been tired after half a season, but Jane Lynch is a once-in-a-generation talent and she made it work. And so here’s to you, Jane Lynch. I wouldn’t recap this episode for just anybody.

With nary an official New Directions leader in sight, Will Schuester has taken over practice today and the kids are singing a hippity-bippity version of Clean Bandit‘s “Rather Be.” They don’t have time to celebrate performing with nearly enough kids to go to Sectionals, though, because Blaine and Kurt arrive back from their honeymoon and Blaine is devastated because Dalton Academy has burned to the ground. No deaths, no injuries, even the blazers made it out intact — as we will soon see — but Blaine is still devastated. All that money. All those white guys. That school would be back up and running in a castle in three months, and in a megachurch in the meantime, but no, that is not what happens. 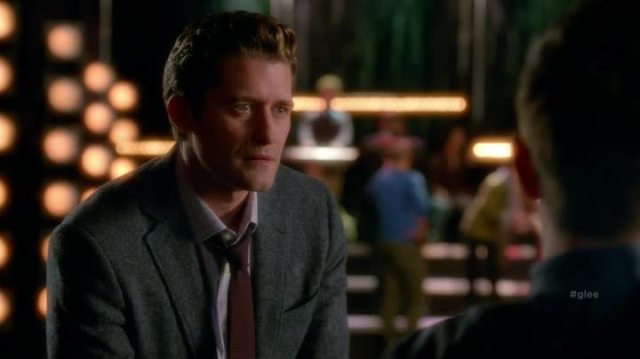 What’s the matter with Blaine? He looks wrecked. 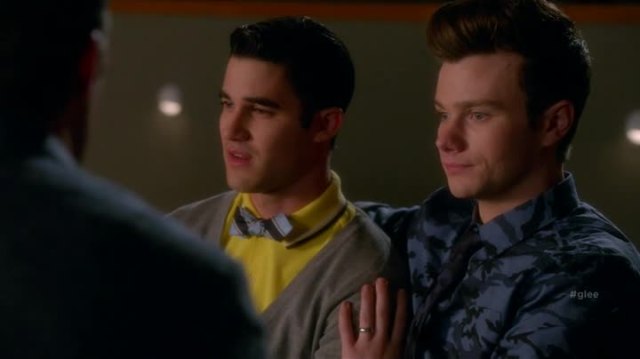 He just found out Santana’s not coming back until the final musical number of the finale.

Will invites the Warblers to join New Directions. Jane, obviously, is like, “Are you kidding me with these sexist wankers?” But she’s not as mad as Sue, who clomps right into the choir room and gets in Will’s face, going back and forth about who got permission from whom to do this Warbler thing, and finally Sue says she’s taking it to “Senate Majority Leader Mitch McConnell, who I met recently on the Cayman Islands at a leadership retreat and turtle hunt.”

She and Will take turns screaming, “Leave!” “No, stay!” to the Warblers.

Becky gets wind of Sue not letting the Warblers join New Directions, and for some reason that sets her off more than she’s ever been set off, more even than whatever thing xylophones did to her to make her so mad at them all the time. Becky is on the school superindetent’s side, but Sue has a letter from “the president pro tem of the United States Senate, Orrin G. Hatch,” who find the fact that rival show choirs are combining forces “both morally repugnant and convenient.” Becky yells and yells, while her boyfriend Darrell patronizingly “translates” for her, and Sue tells her over and over to calm down. Becky finally storms out, after saying she can’t believe Sue would do this to her after all the things she’s done for Sue, including perjuring herself in front of a grand jury. 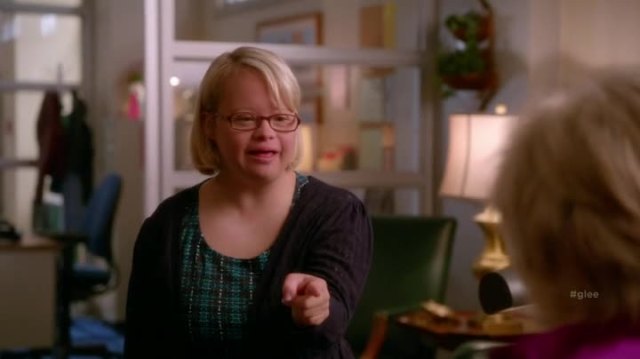 If you don’t stop this vendetta, I will spoil House of Cards’ third season for you! 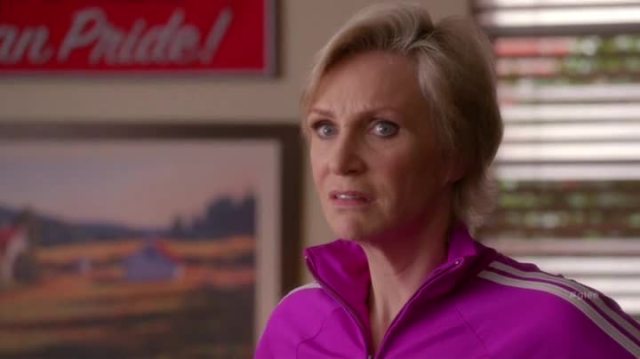 How dare you! You know I got distracted by Kimmy Schmidt!

Sue goes to see the school superintendent, wearing Barbie pink lipstick and one of her cheerleading national championship gold medals, assuming he’ll be as accommodating to her as he always is, but nope. He found her hurt locker, thanks to Becky. The voodoo dolls, the wheels of torture, the match-making map of Operation Reunite/Terrorize Klaine, but what really sets him off is he finds one of those old Penthouse magazines Sue posed for. (Maaaaan, remember that storyline? Which straight white guy saved the day that time? Artie, I think.) (Oh, speaking of which, Will Schuester is here for some reason, overseeing this confrontation.) So Sue gets fired.

Her first stop after her firing is an interview with Geraldo Rivera. It’s a thing that takes up the entire second act by rehashing all of Sue’s most audacious claims. It turns out Michael Bolton is not the father of her baby, that she didn’t sleep with any/all of the members of Boy Eats World, that she didn’t fight in the Falklands war, or take part in the extradition of Panama dictator Manuel Noriega. Then the kids of New Directions give their testimony. Artie says she slashed the tires of his wheelchair 17 times. It’s a lot of good jokes, I guess, but I like to think Sue actually did do all of that stuff. She exists on that Adrenalized Hyperreality plane like Mona Vanderwaal. I’m happy to believe their evil genius allows them to bend space and time with their minds. And anyway, it’s as believable as any of the other stuff on either of those shows. 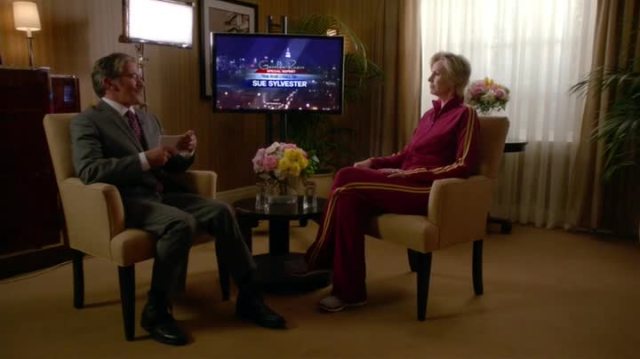 Dude, this interview is on Fox News. 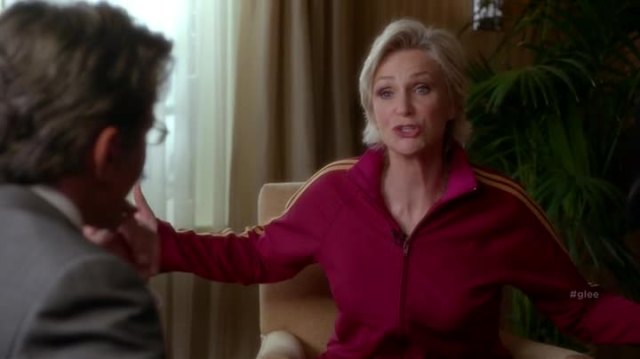 I assumed all pathological liars living in an alternate reality were welcome here.

Well, Coach Bieste defends Sue in a video interview. And so, inexplicably, does Will. And then Sue’s mom, Carol Burnett(!!!), is back, talking about how Sue was born with a full set of teeth and she and Sue’s dad lied to her about being Nazi hunters, and also they never really loved her.