Welcome to the fifth episode of the fourth season of Glee, a show about chicken drumsticks, tuna salad, kayaks and people who eat other people. This week’s episode had the distinct pleasure of featuring absolutely not one single moment of anything I gave a shit about while managing to annoy me with yet another bungled recycled storyline. Glee, you sly, sly fox.

Although one might imagine “The Role You Were Born To Play,” an episode about casting the McKinley High School Musical Grease, would feature Dianna Agron as Sandy and Santana Lopez as Rizzo — it does not. But next week looks neat! 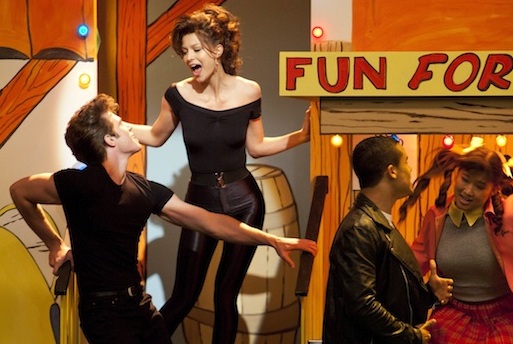 Artie: “You’ve had a rough couple of months and I thought maybe you could use a friend.”
Finn: “It’s not that bad, I just embarrassed myself out of the army, lost Rachel completely, and now I’m back in my hometown working in a tire shop.”

Apparently “having secure employment in a town where my family and a lot of my friends live” is a shameful and unpleasant situation for Prince Finndalin Baratheon. 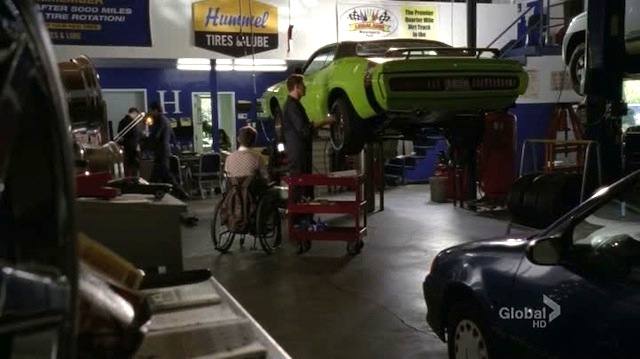 another day, another superhero car to lube up

Finn: “I figure my luck will change soon and one of the lifts will break and I’ll get crushed by a car.”

Oh Finn, no — that’s what would happen if our luck changed soon. Anyhoo, Artie, stealing a line from Ryan Murphy’s bedside journal, tells Finn that Finn’s his hero and he’s not gonna let Finn drown himself in self-pity, seemingly forgetting that self-pity is one of Finn’s Top Five Feelings always.

Finn: “You know, I’ve heard that a lot all my life, Artie. That I’m better than I think I am. Well, look around, maybe I’m not.” 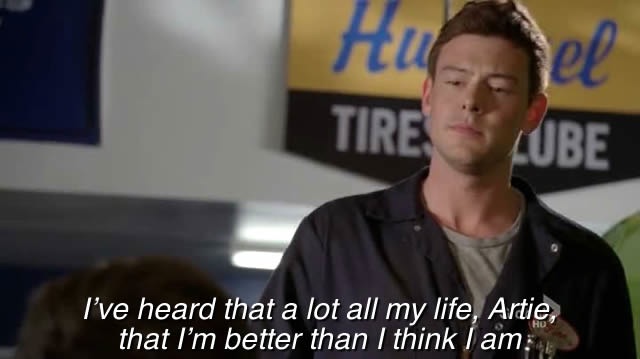 Artie’s solution to Finn’s doldrums? Finn should direct the school musical, Grease! Artie explains that directing is easy and a lot like fascism:

Artie: “Directing is about having an idea and convincing everyone around you to make it happen.” 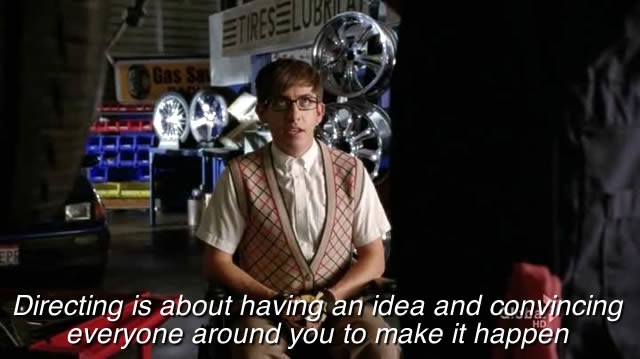 for example, this terrible idea i have to make you director of the school musical

Sweep on over to the Hallowed Homosexual Hallways of McKinley High where Sam’s wondering if he can Executive Order his way into playing Kenickie. Meanwhile, Blaine’s just missing Kurt Hummel and, I assume, all of Kurt’s Safari Scarf Headwrap Fur Leather Wool Modern Flashy Vintage Outfitwears. Blaine’s so forlorn, in fact, that he’s refusing to audition for Danny Zuko, The Role He Was Born To Play.

Blaine: “I’m not in the right headspace to do a project like Grease. Since Kurt and I broke up, I haven’t slept, I’ve lost my appetite, I don’t even gel on weekends.” 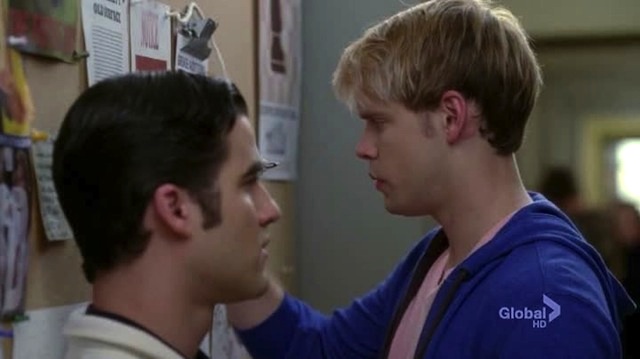 Blaine: “We talked about spending our lives together, and retiring in Provincetown and buying a lighthouse and starting an artist’s colony.”

Oh, Blaine. Of course you did. If you’re anything like me, though, when you think “lighthouse,” you think POTATO CHIPS! 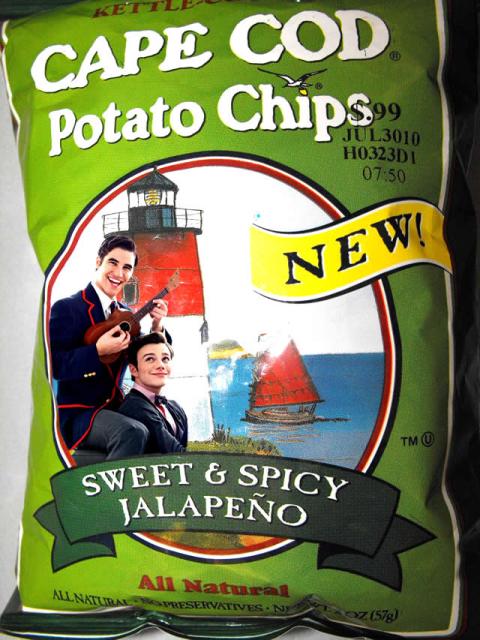 this is the part of the recap where intern grace and i will drop the mike and walk offstage, ’cause we’re done

(Also the Virginia Woolf book thing) Thus we segue into the evening’s first musical number, “Hopelessly Devoted To You” — a curious choice, as the song was invented for Grease the Movie, not Grease the Musical, but whatever. Confession: I WAS SO INTO GREASE. Grease was my favorite movie for like ten years. I watched it every week, I know all the songs, I own the DVD, and I saw Rosie O’Donnell play Rizzo at the Fox Theater in Detroit 1994 and I still have the ticket stub. Also, when I was a kid I always fast-forwarded through “Hopelessly Devoted To You” ’cause I hated it. /done. 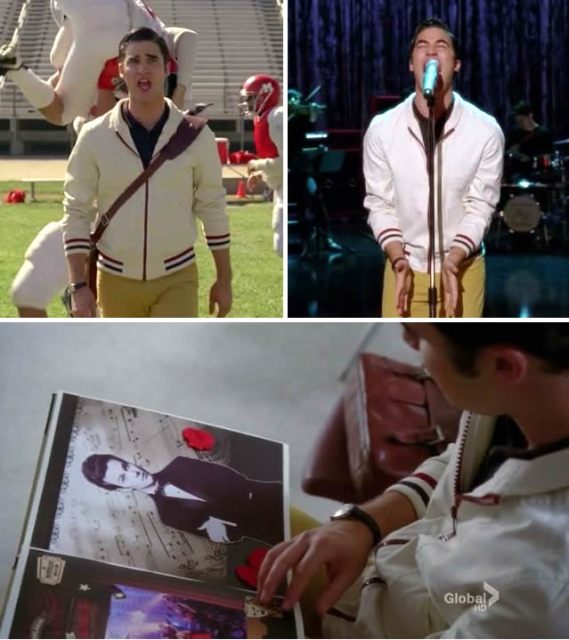 The number is sentimental and melodramatic and adorably absurd it and it eventually leads us to the Auditorium Stage, where Blaine’s auditioning for Artie & The Histronics. Because Blaine’s got Danny Zuko hair, can sing like a motherfucker, and is wearing a store-brand version of Zuko’s varsity sweater, he’s clearly a shoe-in for the male lead. But not so fast!

Blaine: “I can’t, I’m sorry, I just can’t, Finn. I didn’t want to let you down, but Grease is a romance, and how can I play any of the scenes if I have ruined mine? I don’t think I would be able to play the truth of Danny Zuko.”

We’re finally starting to see Blaine and what I see is a boy I’d like to hug and talk about RENT with. Anyhow, Blaine than suggests that maybe, just maybe, he could manage playing Teen Angel, and with pitch-perfect melodrama, projects himself offstage via the Power of Too Many Feelings, which inspires Finn to have his own “I can’t do this” meltdown and waddle out of the auditorium.

Back in the Hallowed Horticultural Hallways of McKinley High, Arite’s chasing a slab of wet clay, begging him to reconsider. How will Artie seduce Finn back into the swampy underworld of musical theater direction? Well, Luckily Sweet Baby Jesus Crying In Heaven — or perhaps Teen Angel — has blessed the hallowed halls with a new “vocal coach” and “choreographer,” the former of which allegedly resides in Los Angeles (or Chicago?) and is pursuing a recording career and the latter of which I believe is in dance school but whatever. 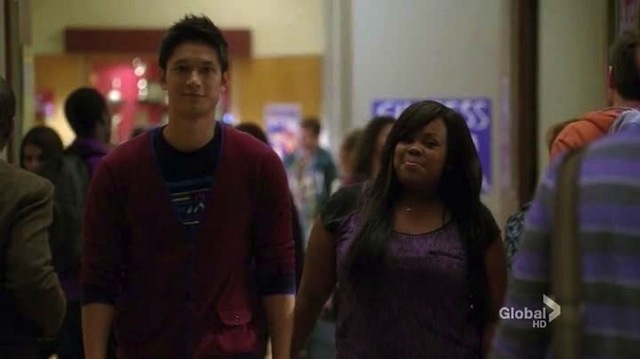 It’s good to see these two again — but you know who I wanna see even more?

As Mercedes and Mike approach Finn & Artie, we break into slow motion and the foursome begin laughing uproariously as if somebody just told them “laugh uproariously” and it’s super-weird. 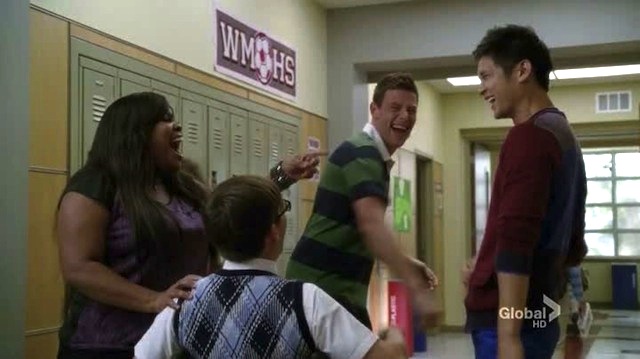 Back at Grease HQ, Finn and His Merry Band of Returning Seniors are lamenting the lack of a viable Danny Zuko. (I blame The Glee Project.) Finn’s surprised that, just like every other high school musical production, his guppies are missing a viable male lead.

Mercedes: “Well, there aren’t a lot of dudes like you. Even Mr. Schu had that problem when he first started Glee Club.”
Mike: “That’s why he went looking for you.” 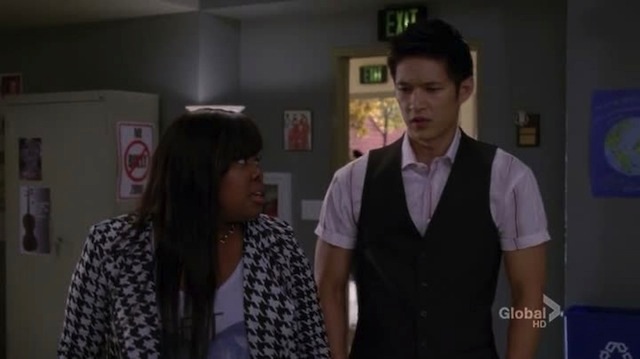 hey what about that extra from the mckinley high ever-mute jazz trio, he uses hair gel

Thus Finn The Magical Potato Sack galavants glumly to the football fields to locate Everybody’s Worst Nightmare: Another Finn. On the sidelines, Coach Beiste butters Finn up with the standard “you’re special and will find your way in life” globbedyglook as Finn casts a glance upon the spry football aspirants, searching for that special someone. 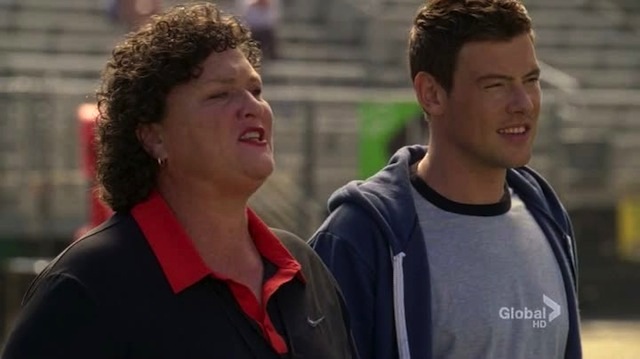 they call it “the x factor,” finn. somebody who’s got that extra special something and britney spears knows it

Everybody masturbates all over Finn:

Coach Beiste: “You wanna know the thing about you that makes you special? It’s not about the singing or the dancing or the way you threw the ball. It’s that you could move people.”

Finn’s a rabid People-Mover! Coach Beiste points out The Floppy-Haired Guy From The Glee Project, who she refers to as “Ryder Lynn” and will be heretofore known as Ryder Beiber-Strong. He’s a mediocre football player and a freestyle breakdancer with a “lazy streak” and chapstick for brains. 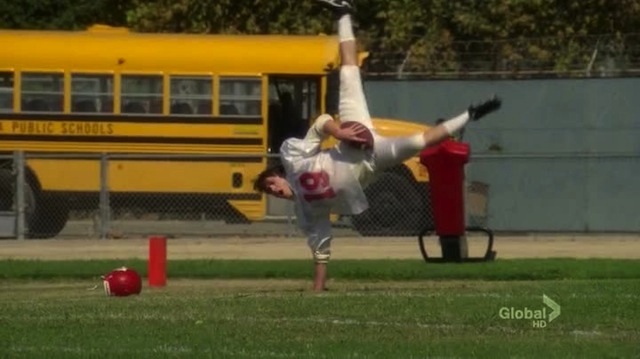 let’s hear it for the boy

Luckily for Ryder Bieber-Strong, he’s a new recruit at McKinley Manmaker High School, a special charter school for boys who need somebody to make a man out of them.

Cut to the Blusteringly Binary Bathrooms of McKinley High, where Unique and Marley are chatting about grrrl stuff, like how “Grease” is the word, etc. 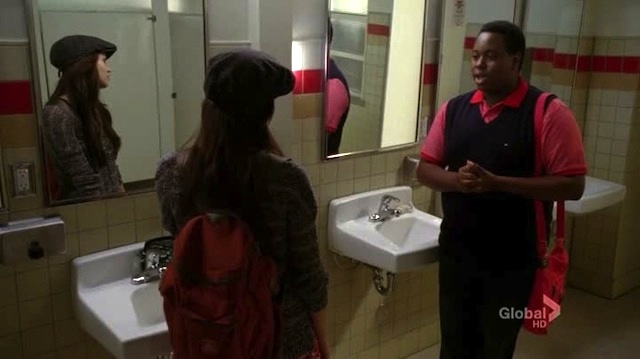 and then i was like, whatever, fuck it, it’s glee

Let me get this out of the way: the show has no fucking idea what they’re doing with this character. I believe she’s supposed to be transgender, but nobody uses the right pronouns, nobody is ever corrected for doing so, and the writers seem to believe that being trans* is just about what clothes you like to wear.

Unique: “Everyone sees me in drag as a joke or a stunt when we’re performing. But it would feel as weird for me to play Danny Zuko as it would for you.”

Really? ‘Cause I’m a cisgender female and wouldn’t feel even slightly weird playing Danny Zuko. Excellent work, Glee! The absolute best way to communicate the transgender experience is to discuss which characters an actor feels comfortable pretending to be. Because that’s the whole thing! Dresses and wigs! Let’s do this same plot like five more times fast and then spin around and put cheese on our noses! Let’s stop casting and start living! LET’S SING OUR TRUTH!

And then! — AND THEN! — Sue marches out of the stall in menswear to deliver a tirade of transphobic nonsense that is so eighteen seasons, 72 ret-cons and two do-si-dos ago. Then somebody fucking kills Jenny, I swear. 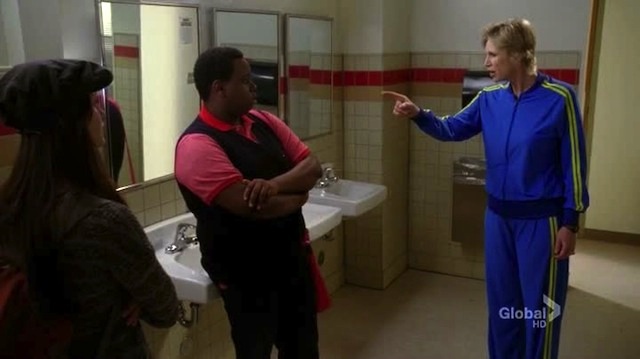 Sue glances at Marley and comes up with nothing, just a paper plate, which’s actually really funny:

Sue: “…I’m trying to think of a mean nickname for you and I’m blanking.”

Sue: “But you, Urethra Franklin, you are a boy and you are fooling no one. You are smuggling more keilbasa under those gowns than a homesick Polish lady trying to sneak through Customs.”
Marley: “You can’t say things like that.”
Sue: “Oh I think you’ll find I can say anything I want, you absolutely stunning, kind-faced, blue-eyed girl…. “

She’s right, Sue can say whatever she wants! Even wildly inconsistent crazy things!

Sue: “…now, I know full well that gender confusion is the liberal media’s new darling, bored with drowning the nation’s airwaves with tinny sitcoms so gay you have to stretch a dental dam over your television set in order to watch them safely. The Hollywood Communists are busy force-feeding us  drag queen reality shows and soft profiles of gender-confused hormone-gobbling pre-teens, who faint at the sight of their own genitals. There’s no way in hell you’re gonna play Rizzo. I will not allow you to unleash a teenage malestrom of gender-bent sexual confusion at this school, so you can turn it around and make it a launch party for your very own line of male girldles and a brand new fragrance called “Nut Whiff.” 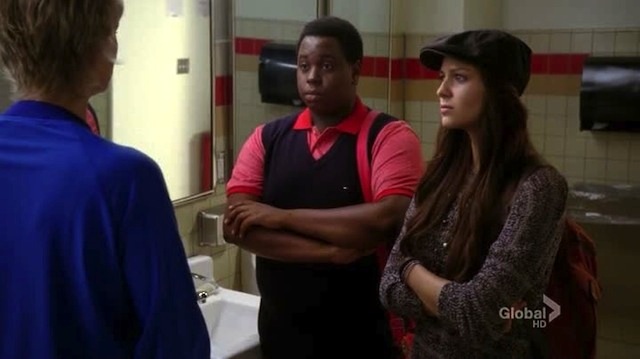 is this really happening