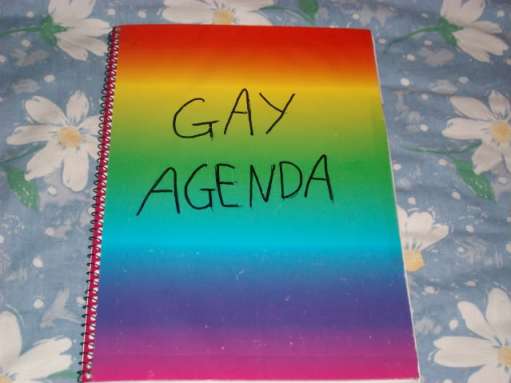 Last week we saw all varieties of homosexual activity on three — THREE! — different prime-time television programs. Except one of them was in the UK, where everyone is drunk and a communist and happier than we are, so you know. Whatever.

Anyhow, before I launch into this guaranteed-to-be-halfassed recap which will certainly leave out most of the heterosexual business, primarily because I am still unable to separate Lea Michele, that-girl-i-knew-who-was-friends-with-all-my-friends, from Rachel Berry, the character, and therefore I feel dorky/strange/stupid writing about her in any substantial way and by “substantial” I mean “fangirlish” because that’s the language recappers are supposed to speak (I realize this sounds like a namedrop, but I’ve been asked why I don’t talk about this or that Rachel moment, so there’s your answer, end of conversation! Ta-da!), let’s cut to the part  that I still honestly cannot believe happened on my teevee:

The thing about gay kisses on teevee is that they tend to be pretty tepid, almost comically so — like everyone super-glues their lips together and then stuffs their glued-up face in another girls face and holds it there, lips still tightly affixed, for 2-3 seconds. Like this:

If you want tongue, try Showtime. Or, you know, Pretty Little Liars. But Kurt & Blaine actually parted lips, possibly even wiggled some tongues down some throats and warbled their way to couple-ville this week, which seemed improbable as I imagined Blaine was coming to find Kurt as insufferable as I currently do and they’d never get together under these circumstances.

But I underestimated the power of an acoustic Beatles tune to bring a homo to his knees.

The episode opens at Dalton Academy, where The Warblers have done the impossible and managed to choose yet ANOTHER song that’d make me walk right out of GapKids no matter what was on the sale rack in a size 18. Apparently these Warbler children who did, to be fair, gave us plenty of clues that they were merely imaginary lemmings sprouted from Blaine’s ID, believe their best/only shot at winning anything ever is to have Blaine sing a song while they make doo-wop noises in the background like little musical soldiers. Kurt, READING OUR MINDS, points out —

Kurt: “Can I be really honest with you? Because it comes from a place of caring: Been there, done that. Look, Blaine, your solos are breathtaking. They’re also numerous.”

Mhm. If they wanna wow the crowd, they can’t just cover Train and Maroon 5 and all those other pussy guys while Blaine does sign language. WHAT WILL THEY DO? WHO WILL HE SING WITH?

Cut to Kurt in his room looking at himself for no reason when his pet bird Pavarotti, who I may or may not remember ever existing prior to this episode, drops dead. That’s unfortunate considering Kurt could’ve used the money he spent on that Burberry birdcage cover on saving a child from the devastation of the earthquake, tsunami and nuclear crisis currently happening in Japan or even saving a child who lives nowhere near Japan and has never heard of Japan but nevertheless is, as they say, “hungry.”

But Kurt is also hungry. Hungry for “me-time” which for Kurt means “everybody-look-at-me-time”! He decides to express his feelings about Pavarotti’s death through song — BLACKBIRD. Jeezus there are no words for my love of this song. 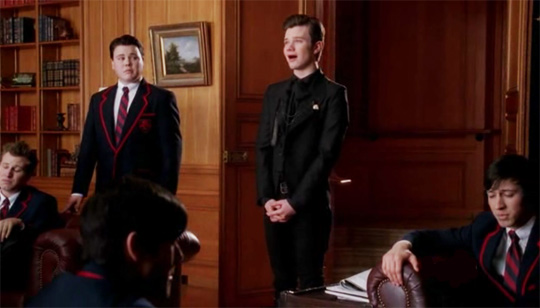 This is the moment that Blaine will reference later when he confesses to Kurt, after having encouraged his cult to allow him and Kurt to do a duet together and gotten the sign-off on it:

“Kurt, there is a moment when you say to yourself, ‘Oh, there you are. I’ve been looking for you forever’. Watching you do Blackbird this week, that was the moment for me, about you. You moved me, Kurt. And this duet would just be an excuse to spend more time with you.” 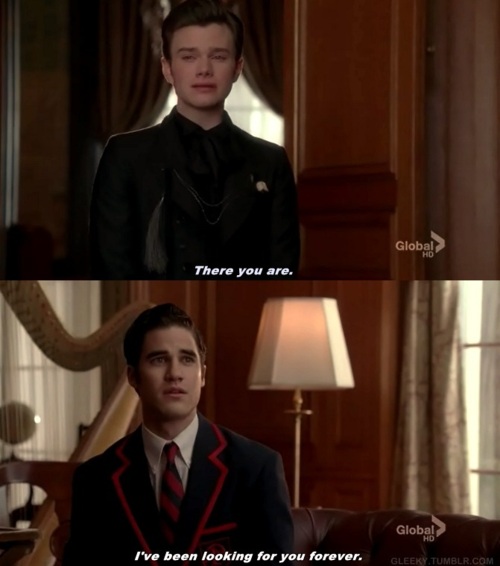 I expected Kurt to literally cry tears of joy, but going in for the makeout ain’t so bad either. I’m hoping sex will losen Kurt’s collar a tad and remind him to show us some genuine “glee” again. In other words, I expected this. What are the kids at World’s Only Coffee Shop gonna say when these two boys stride in holding hands? TIME WILL TELL!

I’m happy that by the end of this episode we saw Kurt expressing shards of GLEE, the feeling, and I hope to see more of how this relationship makes Kurt happy.

Over at the lockers of our Discontent and Thwarted Desires, Brittany cutely edges up to Santana’s locker: “Hey, can I ask you a question? We used to be really close, and I really miss being your friend.”

Santana’s got the ice wall up in full effect — the rigid jaw, the cold, menacing stare — “Still waiting for the question,” she retorts.

“Did I do something wrong?” Brittany asks, sad as a sad puppy. 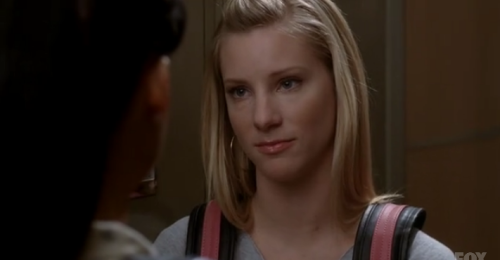 “I don’t know, did you?” Santana turns and almost — almost betrays her steely exterior but she ultimately powers through that moment where she’s forced to nearly look Brittany in the eye and wants to die again and lands safely on the other side of it — where Santana’s feelings still belong to Santana and nothing hurts. 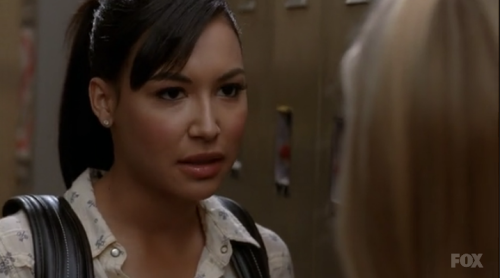 Santana continues — “All I know is you blew me off to be with Stubbles McCripplepants. But it’s your loss. Because now I get the chance to write a heterosexual song about Sam, that we’re going to sing at Regionals.”

Nicely played. See ladies — watch and learn. This is how one maintains one’s cool trashwhore exterior. Firstly: never make yourself vulnerable. One must keep the upper hand, one must have complete control, one must relish in the power of being the one less in love. Failing all that, one must at least APPEAR to have the upper hand/control/be less in love.

All I know is you blew me off… 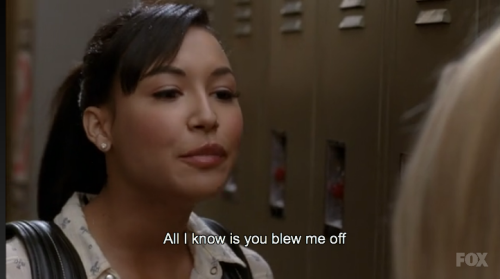 Retrospectively downgrades the significance and importance of Brittany rejecting Santana’s desire to be with her despite the incredible stakes by referring to “breaking my heart” as “blowing me off.”

…to be with Stumbles McCripplepants… 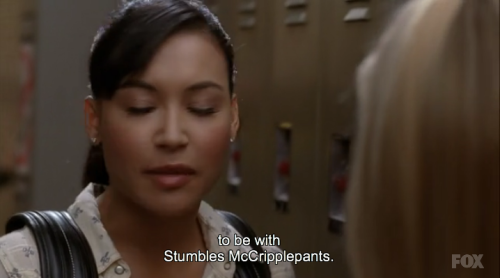 Here she swiftly invalidates Artie’s adequacy as a partner and as a man. This is CLASSIC! It’s transparent but the beauty of these transparent low-blows is that they’re too low for anyone to call you out on being transparent because they’re still recovering from the fact that you actually said what you just said. Also serves to re-establish Santana as existing ABOVE Artie in the food chain of love despite being (as she sees it ) rejected for Artie. 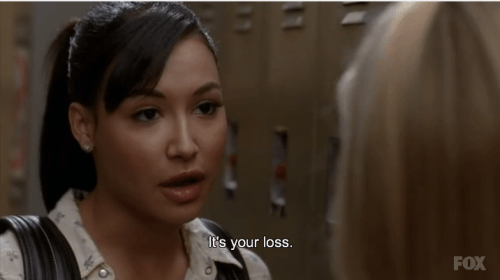 Standard. We all say this, it’s like our last mad dash towards a strand of pride. 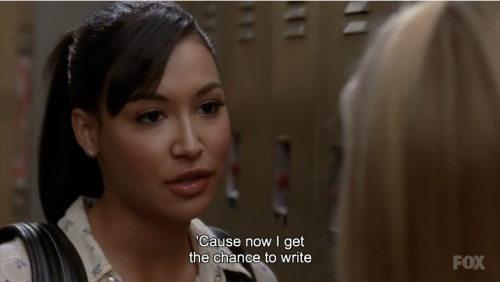 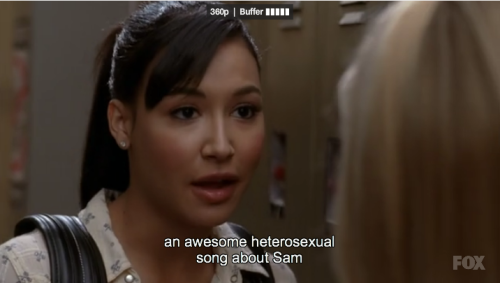 This is a hit at Brittany for favoring her het relationship over lovegames with Santana. Santana is mocking Brittany’s participation in this farcical sexuality by rubbing its normativity in her face and sarcastically restating its inherent superiority.

Also an attempt to make Brittany jealous that Santana loves someone else, even though I mean, obviously she doesn’t, but she has to act like she does in order to be on top, like Tyra wants everyone to be. You gotta be on top. You know the song.

…that we’re going to sing at Regionals.” 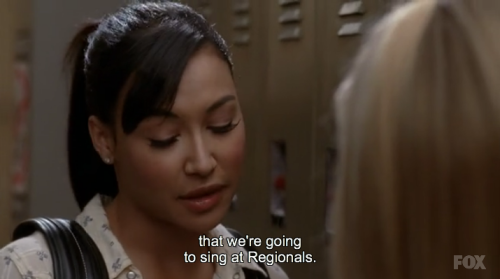 It’s shitty to have all your feelings out there like that, to put them out there and let someone else decide what to do with them. You’ve got to get that shit BACK. And that’s what Santana is doing. Here’s hoping that they’ll work their shit out in a month — in song! And also naked.

Brittany, who probably also doesn’t know what season it is, is like, “wait, you’re still dating Sam? But you told me you were in love with me.” Brittany wants it back, that love, or maybe she wants Santana to admit she’s no more ready to leave Sam than Brittany is to leave Artie (which is untrue), or maybe she realizes being in love with each other and loving their boyfriends are mutually exclusive and she should leave Artie and his sweater vests behind in JC Penny and jet off into the future , which I imagine to be like Candyland, but rated NC-17 and with no boys.

Santana icily replies, lying clearly to save face: “I honestly don’t know what I was thinking. Look, can you stop staring at me? I can’t remember my locker combo.” That last part I think is because when someone stands that close to you, you can totally smell them and that makes you want to crawl inside them forever and ever.

Then Sue Sylvester arrives, calls them “Tweedle-dumb” and “Tweedle-fake-boobs,” says crazy things about them leaving Cheerios for Glee, and then as she departs, they open their lockers and piles of dirt pour out upon them, thanks Sue! 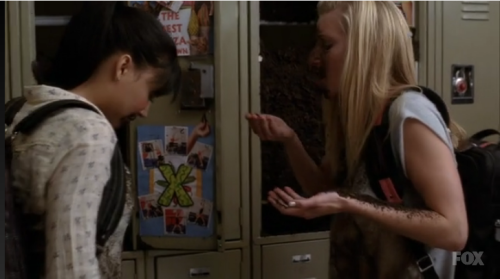 Brittany: “I don’t even remember putting that in there.”