This past weekend at San Diego Comic Con, theater dorks and vampire enthusiasts alike had their cravings for spoilers moderately satiated as Glee and True Blood panels revealed teeny tiny bits of information about the shows’ upcoming seasons.

The Glee panel featured executive producers Brad Falchuk, Ian Brennan and Dante Di Loreto, with cast members Lea Michele, Cory Monteith, Darren Criss, Kevin McHale, Jenna Ushkowitz and your imaginary girlfriend Naya Rivera. If you’ve watched Glee from the beginning as I have, you probably have a lot of feelings regarding its slow and painful descent into the kind of show that you hate yourself for watching but just can’t stop watching, because what if it starts to get better and you missed it? It’s hard to tell from the hints that the cast dropped whether or not Glee is going to return to its original glory. For example, they didn’t mention anything about introducing an additional queer female character with a gender presentation other than high femme, something that I’ve been waiting for since the beginning — not that I don’t love Santana! I mean just watch this video. 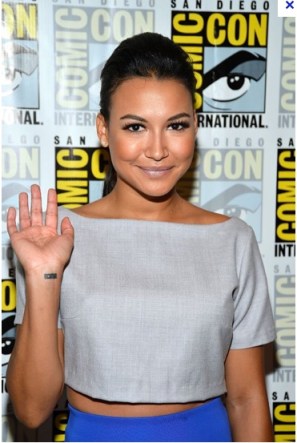 What they did reveal is that season four will begin with Santana at the University of Louisville, cheerleading, rather than in New York with Rachel. Santana and Brittany’s relationship will be in a “good spot,” which is unfortunate if you were hoping that Santana’s College Lesbianage would involve her hooking up with lots and lots of girls.

Kurt will still be at McKinley, working as some sort of teacher’s aid to Mr. Schue as together they fill the Glee Club’s empty spots. Hopefully he will be getting paid for his labor. Also, that means Kurt and Blaine will still be together, and probably still tearfully processing what will happen to their relationship if/when Kurt moves to NYC. The producers hinted that Kurt will indeed be joining Rachel in NYC eventually, so you can count on a lot more processing in the upcoming season. Also, Darren Criss had a beard, which apparently did not go over well with the audience.

Rachel will be taught by guest star Kate Hudson at NYADA, who will be the anti-Mr. Schuster in terms of teaching strategies – which makes her sound a lot like one Sue Sylvester. Speaking of Sue, she will have given birth at the beginning of the season, but we still won’t know who the father is. I’m not sure why that’s important, since she signed up to have and raise the baby as a single mom, but apparently it’s a thing people are curious about. Ian Brennan assured the audience that Sue will still be Sue, and even though she’ll be raising a baby she’ll still delight in tormenting others.

The second episode of the season will be yet another Britney Spears tribute.

Also: Will and Emma are not yet engaged but are “doing dirty things.” Mercedes and Puck will be in LA. Damian “Irish Breakfast” McGinty won’t be returning, at least not for the first half of the season, but Samuel “Teen Jesus” will, along with fellow Glee Projector Alex Newell. Finn remains the “question mark of the season,” much to my overwhelming indifference. 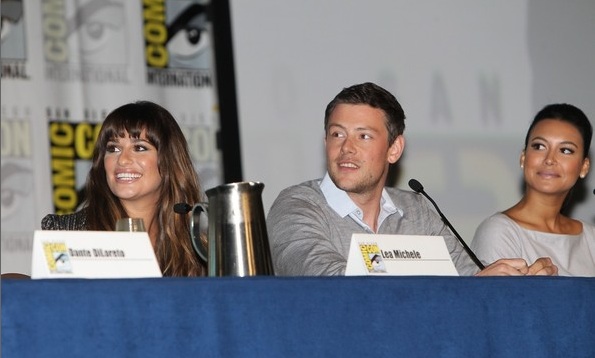 The True Blood panel featured Alan Ball, Alexander, Skarsgard, Christopher Meloni, Kristin Bauer, Ryan Kwanten, Sam Trammell, Rutina Wesley, Joe Manganiello, Nelsan Ellis, Deborah Ann Woll, Setephen Moyer and Anna Paquin and her baby bump. The panel began with a brand new preview reel jam-packed with vague yet thrilling glimpses of scenes in which Sookie maybe tries to become human, Tara has some pole-dancing skills and a confrontation with her mom, Jessica sleeps around, Godric Returns, Russell Edgington eats people and also wants to be with Eric, and overall it seems that there is an impending war between humans and vampires. I’m into it. After the preview reel, the cast members took turns showing off their superior abilities to body roll. 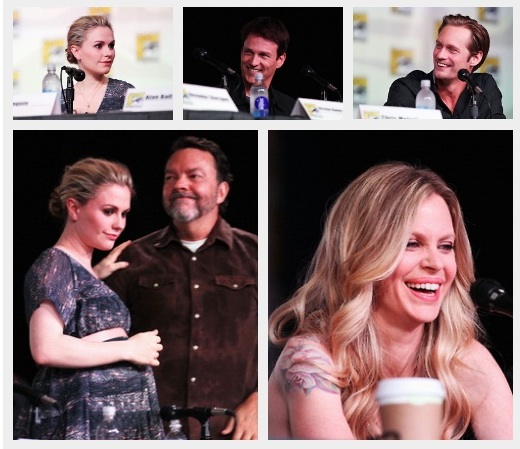 There hasn’t been any good sex on True Blood yet this season, but don’t worry, that’s apparently about to change. Alan Ball said that there will be much more sex in the next few episodes, during which “all tastes will be satisfied.” ALL THE TASTES! I think that’s an awfully ambitious statement to make. Did they make a list of all the tastes first? Also, there will be three new romances that are yet to be revealed. These are the three romantic combinations that I think would fulfill all the tastes: Tara and Pam, followed by Tara and Jessica, followed by Tara and a new butch-ish vampire named, oh I don’t know, Shane.

Speaking of Tara, Wesley said that playing her character as a baby vampire is an “overall joy” involving her “more leathery side.” She means this literally with regards to her new wardrobe, which perhaps we can all feel “overall joy” about.

Moyer and Skarsgard got their flirt on as they discussed how much they love working together, discussing their “bromance” that exists both on-screen and off. There is apparently something from their history together that we haven’t seen yet, and I’m thinking it might involve them sensually rubbing their chest muscles on each other.

Disturbingly, Manganiello mentioned that he will sexually “eviscerate” one of the other cast members. Hopefully he will also be getting enthusiastic consent and a safe word beforehand.

We’re also about to learn more about the untimely deaths Mama and Papa Stackhouse. And Anna Paquin gave the not-at-all vague or unsurprising hint that the season finale is going to include a “very, very crazy scene at the end.”

Alan Ball received a standing ovation as this will be his last season with True Blood, since he’s “old and tired.” Apparently, writing and directing one of the most popular shows on television is a really hard and exhausting job. 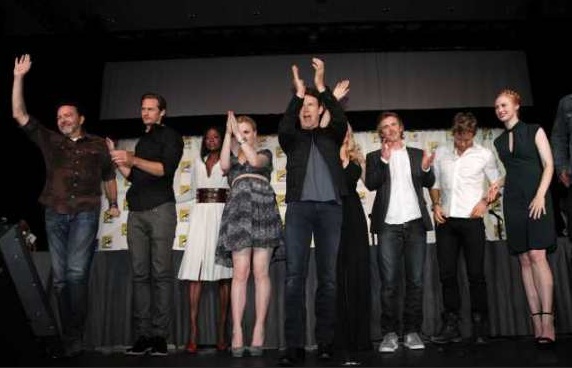 All in all, these panels looked to be a lot of fun but also looked like they didn’t really reveal anything that fans couldn’t figure out on their own. I’m pretty excited for the rest of this season of True Blood, though, and hesitantly looking forward to seeing what will happen with the Diaspora of original Glee characters. What do you all think?