Q:
I’m having doubts about my girlfriend’s heterosexuality. She says she’s attracted to men, but routinely fawns over naked women on the internet. She says it’s ’cause she finds the female body beautiful, but I think it’s more than that. She finds other women physically attractive, and she gets pretty aroused watching videos of suicide girls and scantily clad models or what have you. She’s joked about “eating out” another girl and other things, and is very defensive about the whole subject and I feel like I can’t talk to anybody else about it. I just need a second opinion on this. Is my girlfriend a lesbian, or at least a little bi-curious?

A:
Ok ok ok. I’m going to be doing a lot of generalizing and assuming in order to reply to this question. And then there’s the issue of labeling someone else’s sexuality for them, which every good little queer knows isn’t allowed. However! Even though people are probably going to yell at me, I’m gonna go ahead and say that my first and most prevailing thought was “hm this girl sounds ummm exactly like me -6yrs ago,” which is why I wanted to talk about it. We like talking about ourselves. This morning I had blueberries for breakfast!

So I used to think I was straight, but that I was ‘open-minded’ when it came to sexual things. I would – and this is kind of embarrassing but I’m gonna share it with you because I like you – I would ask boys to tell me what it was like to go down on a girl. I was actually pretty obsessed with that.

But! I never thought I could be gay. Like, it didn’t even occur to me. Then I cried in my best friend’s driveway because she was going to get her nails done with some co-workers and I was like, “WHAT THE HELL IS WRONG WITH ME.” So I searched my soul and realized that I wanted her to take off her shirt and cuddle with me on the sofa, which doesn’t necessarily make a person gay, but I was definitely in love with her.

Then one weekend I had free Showtime and I watched Shane fuck Cherie Jaffe by the pool and my head exploded. 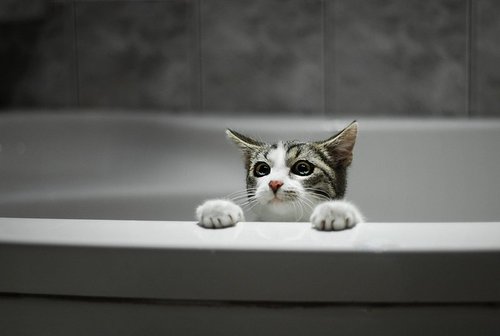 Based on my own experiences and similar stories from other people, I feel like your girlfriend would really enjoy rolling around naked with another girl. But there’s more to being a lesbian / bisexual than just sex, obvs. There are emotions and trust and all that jazz, just like in a straight relationship. Like you have to be willing to sit up until 5am talking about your feelings and her feelings and whether or not you’ve allowed enough space for her feelings to be fully respected while also ensuring that your feelings are respected because the sale at Ikea ends tomorrow and you have to make a decision about that lamp for real. And what I’m saying is, not everyone is cut out for / wants that shit.

If you’re feeling generous and maybe slightly masochistic (<– personal opinion), you could give her the go-ahead to explore the world and all the breasts it has to offer. Don’t make the mistake of insisting that you be there to witness the exploration – that’s skeezy. Maybe she’ll really like girlsex and want to keep doing it, but liking girlsex and wanting to date you aren’t mutually exclusive feelings, you know?

I’d say most importantly, you should take her at her word. If she says she’s not gay, she’s not gay. Even if you’re SURE she MUST BE gay, you have to go on how she defines herself. Then just love her as a human and support her in everything she does etc. Even if one of the things she wants to do is your sister. You seem like a supportive, caring person and I wish you well.

Now everyone else is going to tell you what they think in the comments! It should be fun. Probably someone will yell about polyamory and bisexuality and labels, so this’ll be a lot like a real lesbian relationship!