Ani DiFranco Appreciation Club is an all-inclusive space devoted to the appreciation and discussion of Ani DiFranco’s music. Meetings are open to anyone with a love of Ani DiFranco; new members welcome. We strongly encourage everyone to buy Ani’s music and not download it illegally, please.

Hello! And welcome everyone to the first Ani DiFranco Appreciation Club meeting of the new year! It makes us smile just to dream of it, how have you been? We’re excited to see so many familiar faces, and if this is your first meeting, welcome! Please take a moment to sign the attendance sheet in the comments. Is there a volunteer to take the minutes? Excellent, thank you wallow14. Vegan, gluten-free cookies and soymilk are available at the snack table by the door, please remember to compost your soiled paper products when you’re finished with them. Now we’ll just wait for everyone to settle down and we can begin. 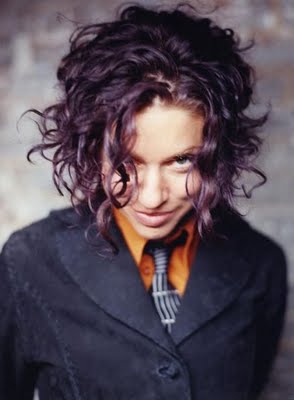 How many of you are here with your same-sex partners, show of hands. Mm. I see several of you are sporting undercut hairstyles, and I think I see at leeeeaaast one pair of suspenders in the back. Don’t be embarrassed, they’re lovely. Everyone please take a moment to look around the room and note the abundance of queer and queer-allied persons. This is no coincidence. Have you ever stood in line for an Ani show? Probably half the lesbians in your town were there. Probably before you even went inside somebody said to somebody, “Omg she’s here; she’s here with her new girlfriend kill me DON’T LOOK SHE’LL KNOW WE’RE TALKING ABOUT HER fuck I hope we don’t end up standing next to them.” Which brings us to the focus of today’s meeting: Ani’s Gayest Songs. 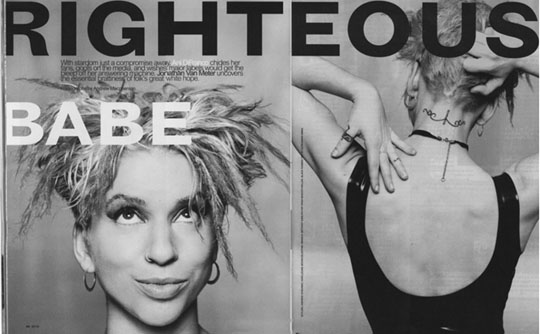 What’s interesting is that Ani doesn’t have that many “gay” songs, you know? She references being with girls on just a handful of songs released in the early and mid-90s, which isn’t very much considering her vast repertoire.

But, as we’ve mentioned before, Ani writes about love/relationships/emotions the way nobody else can, so people of all orientations can relate to her music. She’s also always been a champion for fringe-y types – feminists, queers, lefties, activists, DIYers, artists, shit-disturbers – so it makes sense that she has a huge gay following. We love her because she gets us. She also wrote “I am thinking of her fingers as I walk” in like 1991 and cemented lesbian attendance at her shows for the rest of her life.
And here we are all today. Talking about Ani being Gay! 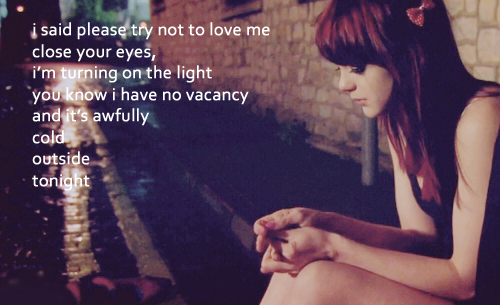 Riese: It’s sad when you know a person could love the fuck out of your stupid shit and you just can’t. Maybe someday, maybe somehow you’ll be ready to be LOVED BY A LADY but just not now while my insides are so effed.

bcw: Everytime it rains in the city I get this song in my head. Even the guitar sounds like rain falling.

Please try not to love me. You know I have no vacancy.

Riese: This song was the epigraph for that book I never finished writing about bisexuality. The lyrics give you permission to be pissed off that somebody wants to put you up on any shelf, and I liked that she was independent and came alone/left by herself. Like it was ANI FIRST and LABELS SECOND. I feel this song would be an excellent anthem for the YOU DO YOU movement.

bcw: Imperfectly is arguably Ani’s gayest record, and was the first record of hers I ever heard. This record made me realize I was gay, there is no doubt about it. And ‘In or Out’ was the song that did it, probably because it occurs early on the album. But I also identified as bi when I first came out, and I don’t know, to my 15-year-old self, the lines about stripes and spots and not ordering the same thing at the restaurant were like, life-altering. I immediately learned how to play it on acoustic guitar and did so constantly in front of the mirror in my bedroom. 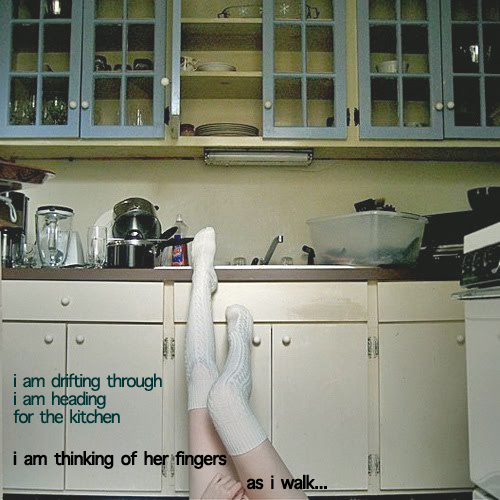 bcw: I was never suuuuper into this song, honestly. I found it a bit cheesy, and it always annoyed me the way she sang “the who-o-ole niiiiight.” It’s cute though. It’s a cute song. People like it. It’s about girls kissing and thinking about each other’s fingers.

Riese: “The Whole Night” is a story of heartache and yearning and impossible desire but the song sounds plucky & happy & free and the language is so light, too. It’s hopeful/scheming. It planted lyrics in my head but they didn’t “flower,” so to speak, ’til maybe a decade later.

I literally feel like I wrote this song. Like, word-for-word. I have held hands like paper dolls, we have tried each other on in the privacy within New York City’s walls, and we’ve kissed our girl cheeks and we went home thinking what it would be like if she or I did not have a boyfriend and we could spend the whole night.

Also, I am thinking of her fingers as I walk — thank you Ani DiFranco for writing that line, god bless you. 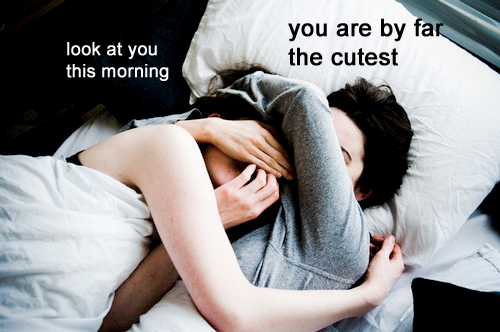 bcw: This song meant so much to me not only because it marked a musical departure for her that blew my tiny mind, but also because of that line about that girl being the cutest. This song makes me think of sunbeams breaking in and early morning road trip coffee and frosty windshields. It has a pretty fun little bassline, too. I think this incarnation of her band – with Andy Stochansky and Sara Lee – is still my favourite.

riese: This is gay because there’s that part where they go into the coffee shop and despite how fucking cute your girlfriend is, you can’t kiss her because you might possible be among ‘phobes. You never know.

bcw: Also it has that GIRL POLICE line that we’ll probably address in another post. This song has everything. It’s a good-time song.

riese: “AA Club #4: ani difranco is trying to break your attitude about her outfits/lovers” 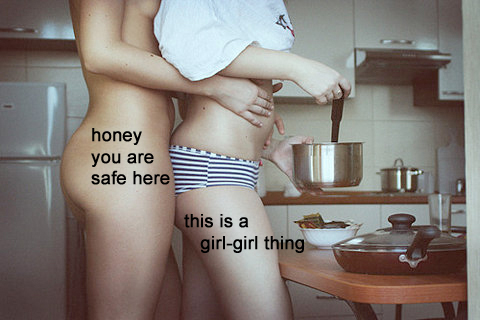 Riese: I have playlists, folders, emails, everything —> titled “a girl-girl thing.” If I ever get married/commitmentceremonied, I want “this is a girl-girl thing” to be on my wedding invitations instead of the word “wedding.”

You’re going to throw stones at me and desecrate my website for saying this — but IN MY EXPERIENCE,  falling in love with a girl has a special feeling to it that falling in love with a guy doesn’t quite match. It’s not even a gay thing, I think heterosexual men feel the same way. Because girls are so giant and complicated and tangled up in these heart-shaped soft bits of desire and mystery and wanting and stuff. And then there’s nothing else in the world but Her, you know?

bcw: God this record was gay. I listened to this album non-stop on my SONY DISCMAN (I couldn’t afford that fancy anti-skip Panasonic Shockwave) on the OC Transpo to and from high school for what feels like a year but was probably a period of two months or so circa 1998. I didn’t listen to any other albums at that time, just Imperfectly. I have vivid memories of staring out the bus window at that big hill at Hurdman station, listening to her sing about it being a girl-girl thing and feeling like my whole self made sense suddenly but was also still a super-scary secret that only Ani understood. I always loved the line “my imagination is rattling its cage.” Imperfectly changed my life, it really did. 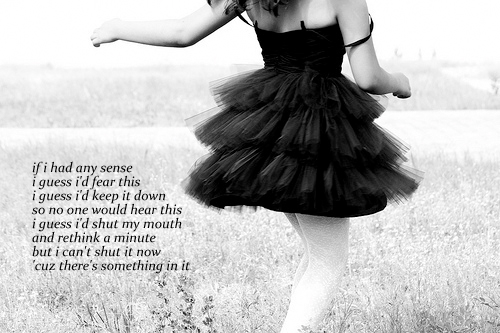 Riese: I don’t know what I said last time, but I can’t say anything about this song without saying everything. TOO MANY FEELINGS

bcw: We covered this song at our first meeting, but it’s her Big Gay Anthem so we can’t exclude it. How do you get into a room if it doesn’t have a door? Unresolved. No but seriously I read this “Unauthorized Biography” of Ani DiFranco at one point many years ago (I’m pretty sure I’m the only person on planet Earth who has read this) and she talked about how one day, early on, she looked out at the crowd and it was all babydykes with shaved heads and overalls and she was like, ‘How did this happen?’ and then I think she started playing ‘Shameless’ less at shows? I don’t know but I always felt a bit weird about that, like why did it matter that it was all lesbians. Did anybody else read that book or am I for real the only one. 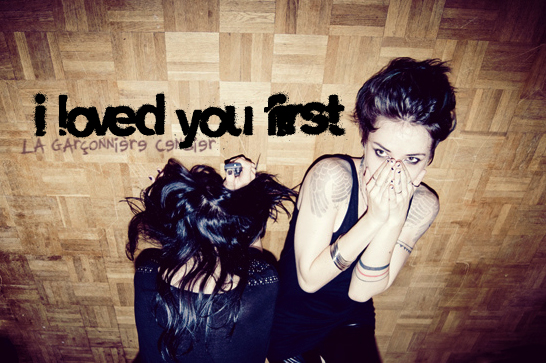 bcw: I want to hear what Rachel has to say about this song because at our first meeting she implied she had a lot of feelings. Rachel, you have the floor. 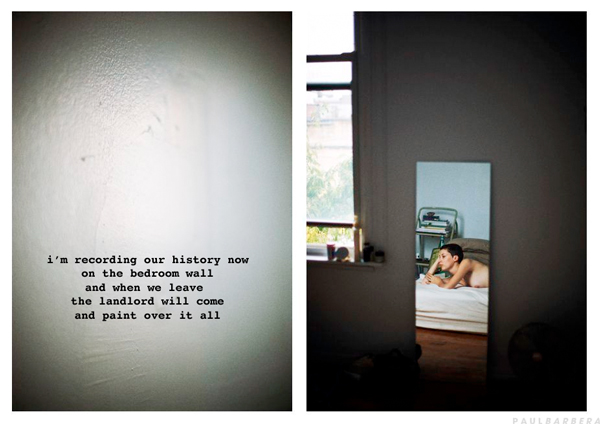 bcw: I think this song is pretty gay. Riese doesn’t. Not that it’s about a girl necessarily, but ‘gay’ in the sense that it’s beloved by gays. I don’t know, it’s one of Ani’s many, MANY, it-could-be-about-anything-because-it’s-about-feelings songs but I challenge you to find me a lesbian guitarist who doesn’t know how to play this. BOTH HANDS NOW USE BOTH HANDS. Gay.

Riese: I would actually say that the sexuality of this song is fluid. I would say it is going with the flow. Because when I first heard this song I was watching a male chest rise and fall and now I watch a female chest rise and fall. It’s bisexual, just like Ani DiFranco. Also you may or may not be able to email me at iusebothhands at gmail dot com, but I definitely won’t write back.

bcw: It has universal gay straight bi queerio queer queer weirdo feelingsy appeal just like Ani and it can be ‘claimed’ only insofar as we all claim each other.

Riese: Ultimately in the end all we really have are our big gay feelings and our handsy acoustic guitars.

What are your thoughts? Did we miss anything super important to your gay self-actualization? Are you SO INSULTED by something in this post? Tell us all your gay feelings about Ani in the comments!