In Annihilation, a biologist, psychologist, physicist, anthropologist, and paramedic enter the shimmer — a mysterious and expanding sector marked by increasingly unnerving mutations. The shimmer is full of contradictions, beauty and terror coexisting. Rainbow light touches down on snarled branches. A rainbow beach and its crystalline trees would be enchanting if not for the presence of human bones, arranged as if an intentional warning. The multicolored flowers that spackle the shimmer’s landscapes become more horrifying once they coexist with fragmented human remains.

The shimmer distorts the team’s memory. Days become months. It’s dreamlike, but it quickly gives way to nightmarish gore. Blood is as essential to Annihilation’s visual storytelling as mutation. Writer-director Alex Garland uses glasses of water and rainbows to play with the concept of refraction. He also uses blood to disturb without doing so gratuitously. The blood’s also there to remind us that the shimmer is fucking with humanity on a cellular level, a violent overwriting of bodies and minds.

The movie itself goes through various mutations. Gentle acoustic music scores the first stretch, sounding more like the soundtrack for a road trip scene in an indie rom com than for a sci-fi horror movie. In the movie’s final act, the music strikingly shifts to a haunting original score that has stuck with me long after I left the theater, the slicing synths as unshakeable as some of the movie’s bloodiest scenes. What starts as a fairly straightforward sci-fi horror hybrid gradually becomes something much weirder. There’s a long, indelible scene near the end that is one of the weirdest film sequences I’ve ever seen.

Natalie Portman is magnetic as the film’s protagonist. Jennifer Jason Leigh’s very recognizable delivery adds to the foreboding tone that looms over the shimmer. Tessa Thompson gives a much different — but still great — performance than her usual, playing a character that’s more timid and uncertain than her other recent roles. Tuva Novotny is subtle, but her characterization of stifled fear is affecting.

And then Gina Rodriguez steals the show with a standout performance. And no I don’t just say that because she plays a confident and muscly soft butch lesbian with an undercut who opens a beer bottle in that way where you slam it against a table edge with your hand (something I have never been able to accomplish without hurting myself). But yes, those details are also important!!!! Also, to set the record straight: Thompson’s Josie and Rodriguez’s Anya are not dating in the movie, although there are some gentle touches and Anya appears particularly protective of Josie.

As she has proven over and over in her roles as Jane Villanueva on Jane The Virgin, Rodriguez does many things at once in her performance in Annihilation, which has a distinct mutation of its own that I won’t get too specific about so as not to spoil. She’s funny, delivering some of the movie’s rare but needed bursts of comedic relief. But she also encompasses the emotional complexity of what it really means to enter the shimmer. She starts with a lot of swagger that, like the shimmer itself, suddenly and disorientingly becomes something much more insidious. Rodriguez flips that switch in a wholly convincing way. Her character’s confusion and paranoia instantly pulls you right into that dark, uncertain place. 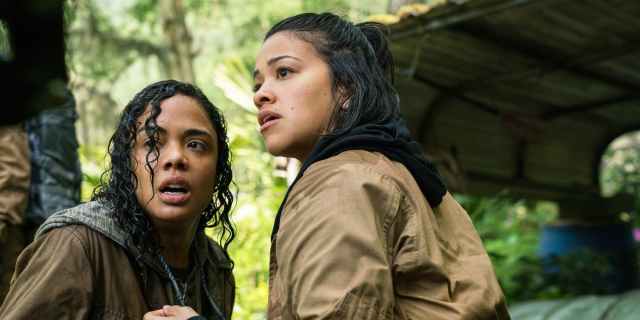 I hope this is the role that propels Rodriguez into a movie star trajectory for her career. She has huge action star potential that I’m extremely ready for. And she should also be contractually obligated to have an undercut for all future roles thankyouverymuch.

Along those lines, I can’t — and don’t want to — write about this movie without addressing its whitewashing problem, a serious issue that should not be downplayed. In the book trilogy that the movie is adapted from, Portman’s character is supposed to be Asian, and Leigh’s character is supposed to be half-Indian. These details are not specified until the second book and apparently Garland wrote his adaption of the first book before the second was released.

Garland and Portman have both made decent statements about the issue, but providing excuses and explanations for the casting does downplay the larger issue of erasure in Hollywood at large and particularly within the action and sci-fi genres. Yes, there are two women of color in Annihilation’s core cast, but touting that in the face of whitewashing criticisms also reduces them to tokens. Why couldn’t the lead character of this movie be a woman of color, too? The fact of the matter is that when race is unspecified, as is the case in the first Annihilation book, Hollywood still has an overwhelming instinct to default to white. And I can’t help but think about how I would have felt—as a half-Indian lover of sci-fi horror—had Dr. Vettris been cast in accordance with her identity in the books.

Annihilation can be both a great, women-centric sci-fi horror movie and also a flawed one much like Black Panther can be the best goddamn superhero movie ever and still have a problem with (black) queer erasure, a paradox Autostraddle’s Carmen Phillips tackles beautifully in her review. To ignore these kinds of criticisms is to let these problems persist.