As a high-holiday Jew whose strongest religious connection is with Jewish cooking, latkes are one of my most visceral foods. They smell like my birthday and my mom making my favorite food and eating with my hands standing next to the stove while I wait for the next batch to fry. Holidays are a weird time for me living thousands of miles away from my friends and family, and making my tiny one-room apartment smell like fried potatoes for days and days helps me feel a little less far away.

Latkes are also really easy, can be made with everything found in a severely understocked kitchen (hi, I’m single and I live alone, why do you ask?), and everyone likes them because they are literally just fried potatoes and everyone loves fried potatoes. Not that you need any more reasons to cook latkes, but it’s Hanukkah this week and latkes are a traditional food so you get to eat fried potatoes under the guise of tradition! This recipe makes about 15-20 latkes.

First step: peel your potatoes. As I peel them I put them in a bowl of cold water after they’re peeled which keeps them from browning I think? We always put them in cold water and at this point I’m too superstitious not to. 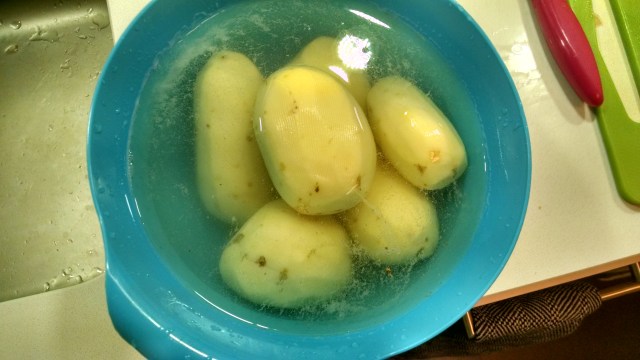 They get more delicious I promise

Grate the potatoes into a bowl using a regular cheese grater, or if you have a food processor you can use that. I’m not even going to get into the pulverized versus shredded debate, but I am #teamshredded. Peel the onion and grate the onion into the bowl as well (warning: this will get onion juice everywhere. I was determined to continue grating despite impaired vision and accidentally grated my thumb. I instead recommend these stylish onion goggles).

Once you’ve grated the onion and potatoes, you have to press out the extra water, which makes the latkes fry better. I do this by covering the top of the bowl in a couple paper towels and pressing down hard a couple times. You could use a dish towel if you’re the kind of person who regularly washes their dish towels, or you could use a fine sieve or colander (see above re: understocked kitchen).

Next, add the eggs, flour, and salt and pepper to taste (I don’t know, follow your heart, I just shake it in for a while) and mix everything up. Important: if you are not going to cook the latkes right away, cover the potatoes in lemon juice otherwise they will turn black! Also put them in the fridge, very important! 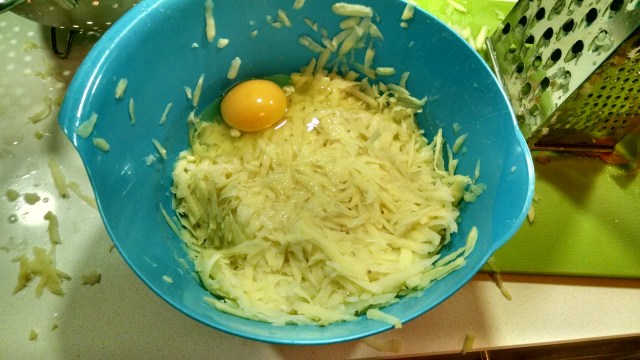 Oh did I not mention you are going to get shredded potatoes everywhere?

Once it’s all mixed, you’re ready to start frying! Put some oil in your frying pan (enough to thinly cover the bottom), put the heat on medium-high, and give the pan a few minutes to heat up. Take a medium-sized spoonful of potatoes and put in the oil, then flatten it out with the spatula until it’s about 1/4-/1/2” thick. Fry for 1-2 minutes on the first side (or until light-brown), then flip, and fry the other side also until golden brown. When I take my latkes off, I like to put them on a plate with a paper towel, which absorbs the extra oil. I usually change the oil every two rounds of frying, but it’s up to you! 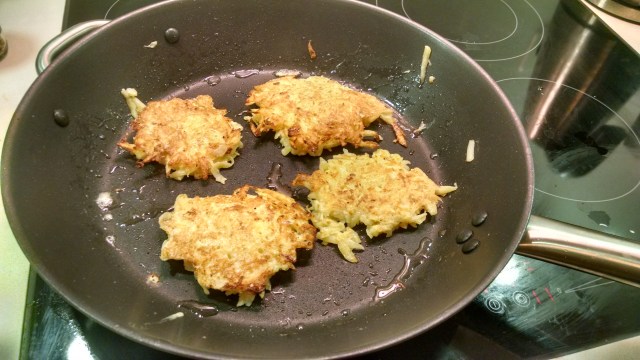 This is approximately what they should look like at this point

If I’m making a lot of latkes, to prevent the earlier batches from getting cold I turn the oven on to 200F and put them on a cookie sheet, or just serve them right out of the frying pan as they’re ready, as my mom always does.

Last but so very much NOT least, I feel really, really strongly about what latkes should be served with. There are only two appropriate condiments for latkes: sour cream and applesauce. You do you, but if you put ketchup on your latkes my Jewish grandmother will turn over in her grave. I got really ambitious during this round and cooked applesauce while I was prepping the latkes using this recipe and I didn’t even burn anything. 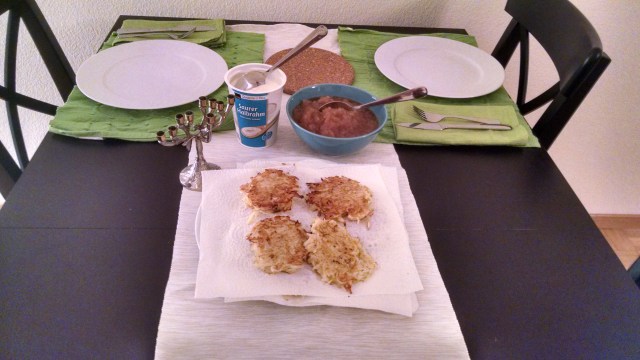 Just don’t tell my mother I couldn’t find any candles that would fit in the Menorah.