This is a very delicious recipe — a little sweet and a little spicy, and you will want to lick your fingers and eat the sauce with a spoon, because it tastes that good. I promise. Also, it is simultaneously comforting and a bit sophisticated. 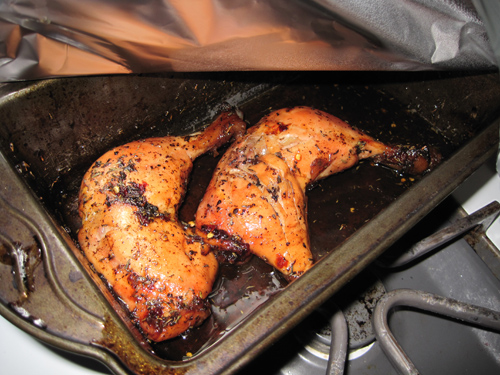 In a bowl, mix together:

1/3 cup pure maple syrup (number 2 medium or darker, not that clear shit that doesn’t taste like maple syrup)
2 tbsp of balsamic vinegar
2 tbsp of vegetable oil
1 tbsp chopped fresh thyme (or a couple of shakes of dried thyme — if using dried, use a lot less, but it should still be thyme-y, you know?)
a few shakes of red pepper flakes, according to taste.

1. Sprinkle some skinless chicken legs (not just the drumstick, the leg and thigh piece) with kosher salt and a few grinds of pepper. If you are a squeamish ex-vegan who found the main perk of veganism was avoiding situations like this, convince your girlfriend, roommate, or dexterous cat to do this for you. I used only two chicken legs, but the recipe has enough sauce for three or four, so if you want to make more, go for it.

2. Plop them in the bowl of marinade and cover them with sauce. Let them sit in the marinade while you get the potatoes ready (you can pop them back in the fridge if you want to, but the marinade will take longer to sink in — not that it matters too much, because you’ll be slathering them with the excess sauce when you’re done). 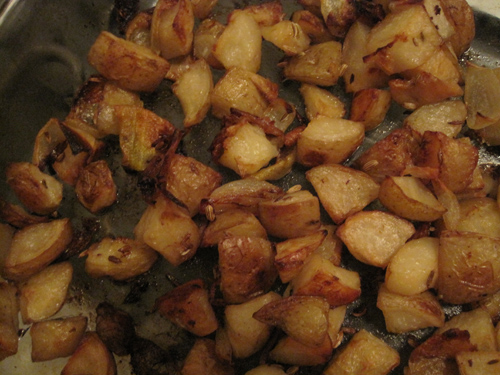 potatoes (fill up the pan and chop more than you think you’ll need, but keep them to a single layer so they’re all in contact with the pan)
onion(s)
garlic
salt
pepper
and possibly some herbs

1. Chop the potatoes into chunks. Chop more than you will think you need — I guarantee you will want to eat lots of these. Throw them in a large baking dish. Chop a couple of onions into large wedges (if you don’t like onions, leave them out) and add them, too.

2. Peel 4 or 5 cloves of garlic and throw them whole into the pan. My new favorite thing to do with this dish is to sprinkle some fennel seeds on top of everything, but you don’t have to do this. You could use some of the leftover thyme from the chicken if you want. Or you could just sprinkle in some kosher salt and a few grinds of pepper (do this even if you add some herbs). Put some plops of margarine or butter on top, randomly distributed, or pour some olive oil on top and toss so everything is evenly coated.

3. Put the dish into the oven. Important: these potatoes take a long time in the oven to get properly crispy. Put them in at least twenty minutes to half an hour before the chicken. After the potatoes have been in the oven about 15 minutes, take them out, and use a spatula to flip them/mix them around. If using butter/margarine, add a few more plops if they look a bit dry and pop it back into the oven. After another 15 minutes, stir them again. Some might stick a bit to the bottom of the pan. That’s okay! Just get everything unstuck, and put them back in.

Cooking the Chicken and the Potatoes

4. After the potatoes have been cooking for about half an hour, put the chicken in a pan (put the marinade in there, too. Keep in mind that because you don’t want the marinade to boil away, you should use a smaller pan — something the chicken pieces fit into snugly, so the marinade is fairly deep) and put the pan in the oven.

5. Check things every 15 minutes or so, first to stir the potatoes and then to baste the chicken. If you have a handy silicone brush, use it. If not, just take a spoon, spoon up some of the sauce, and pour it over the tops of the chicken pieces a bunch of times. Put everything back in the oven. Repeat. Keep an eye on the marinade. If it looks like it’s drying out, add some water to the pan. The chicken should be done in about 40 minutes (and the potatoes should be, too, or almost). It should be slightly shrunken and when you cut into it near the bone, the juices should run clear. When that happens, take the pan out of the oven and cover it with some tin foil. It should sit for about 10 or 15 minutes, so this is the time to make the veggies.

The potatoes might need a few more minutes at this point, and they might not. When they’re done, they should be golden-brown looking and crispy. Some of the onions might be blackened a bit, but some won’t be. If you don’t like the blackened bits, just discard them. If they’re done, turn the oven off and leave them in there to stay warm. 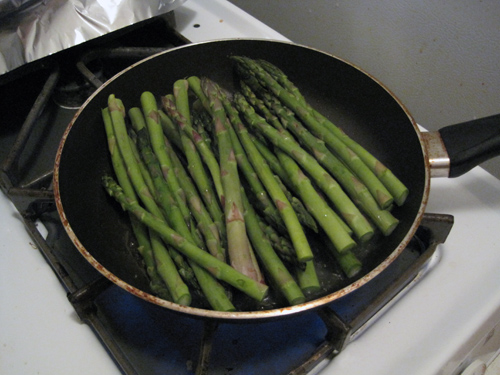 6. My fruiterie was out of swiss chard, so I sauteed some asparagus in olive oil instead. BUT my perfect version of this meal would include sauteed swiss chard. If you do decide to go this route, get the red kind, I think it’s better. Tear the leaves off the stems and then rinse them off. When ready to cook, add some olive oil to a large pan (a wok works well) and throw in the leaves. If the pan gets a bit dry, throw in some water — the steam will help the cooking and you won’t have to use more oil. Crush in a garlic clove (or mince one and throw it in) and shake in a few red pepper flakes, if you like. Voila! veggies done in minutes, and your chicken and potatoes are ready and waiting.

Don’t forget to spoon some of the sauce that’s left in the bottom of the pan over the chicken before serving! You’ll definitely want to dunk your chicken and maybe even some of your potatoes in this stuff. 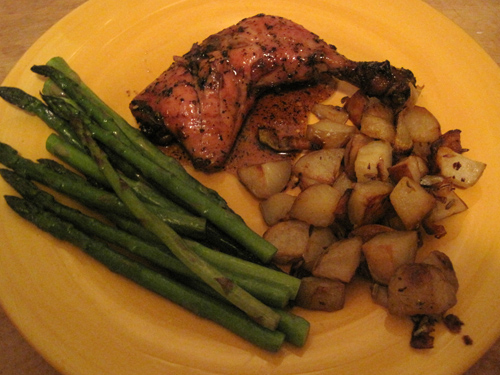 With extra special thanks to Jenna, who is brave enough to touch icky raw things.