My girlfriend was sick last week, so I decided to make some soup for both of our health. For her, it was a warm and tasty meal served in bed and prepared with love. For me, it was an excuse to leave the house to go to the grocery for a bit, then spend a couple hours in the kitchen chopping vegetables, cooking soup, and washing dishes.

I made corn chowder with a recipe adapted from The New Book of Soups, as well as some freestyle vegetable broth. Both turned out magnificently, and several days later, M and I were both in excellent health. But sick or healthy, I expect I’ll be making the corn chowder again and again. Here’s the recipe if you’d like to do the same!

Note: the quantities below come out to about 8 quarts of soup, which is really a lot. Unless you’re feeding half a dozen hungry people with this soup, plan on reducing the quantities, eating only corn chowder for the next week, or freezing some. It reheats very nicely. 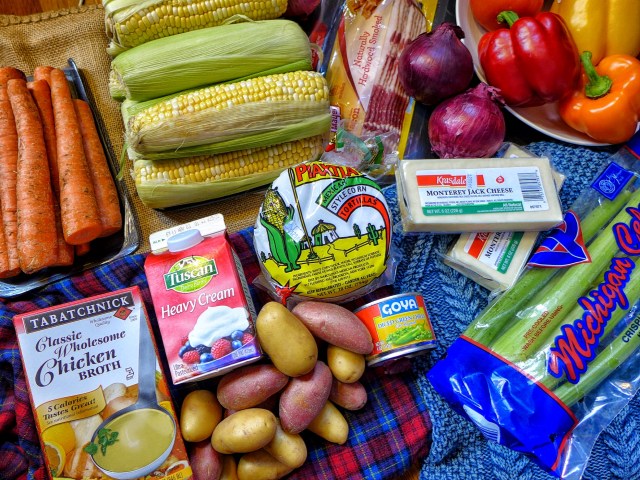 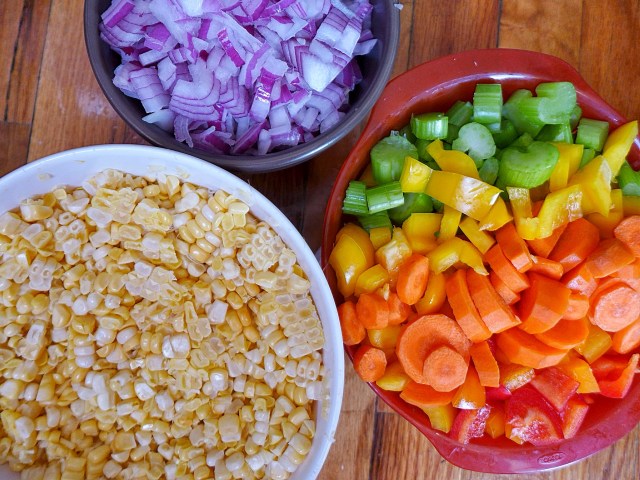 First you’re going to prepare all the vegetables. Shuck your corn and cut the kernels off, capturing as much of the juice as possible. Mince a clove of garlic. Cube your tomatoes and peppers. Peel and dice your onion; ditto for the carrots and potatoes. I bought tiny multicolored potatoes because they’re pretty, but they take forever to peel; I recommend going for larger potatoes that don’t have as much surface area to deal with.

Reserve 3/4 cup of the corn kernels and purée the rest with the heavy cream. Set aside. If you also want to make vegetable broth later (hint: you do!), separately set aside the stripped cobs, carrot peels, celery leaves and white parts, pepper cores, and end bits of the tomatoes and onions.

Cut up the bacon into small pieces and cook in a soup pot over medium heat until crisp. (You can just skip this step if you want to make your chowder vegetarian-friendly. Or add more bacon, if you’re into that.)

Add the carrot, onion, pepper, celery and garlic. Cover and reduce the heat to low. Cook, stirring occasionally, until the vegetables are tender, about 10 to 12 minutes. Now add the broth, potatoes and tomatoes. Simmer for about 20 minutes, covered, until the potatoes are tender. Add the puréed corn and cream, chiles, and cheese. 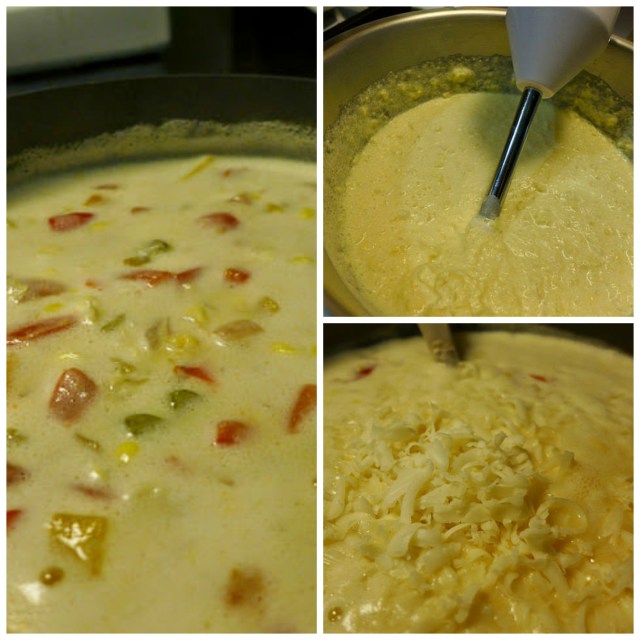 At this point, you can blend again if you want a creamier soup, or skip it if you like the vegetable chunks. Add the reserved corn kernels and stir.

Optional: if you want a fancy garnish, cut your tortillas into strips and toast. I cut mine with kitchen shears, set them on aluminum foil, and popped them into the oven on “broil” for about 5 minutes. 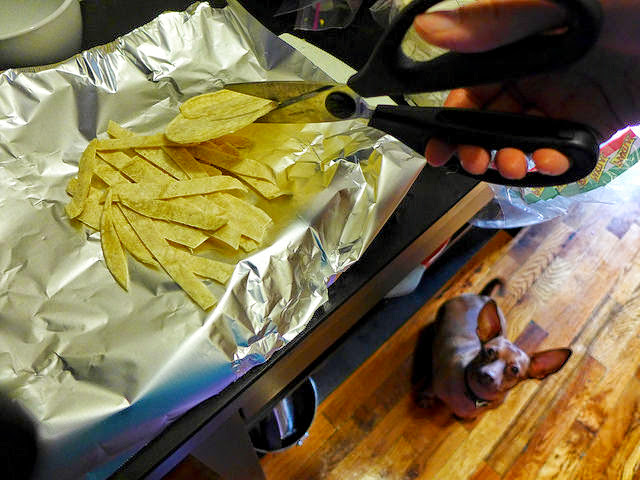 Scoop yourself a warm cup of soup and sprinkle tortilla strips on top, or stick the strips in vertically and use them like swizzle sticks.

Season with salt and pepper to taste and enjoy! 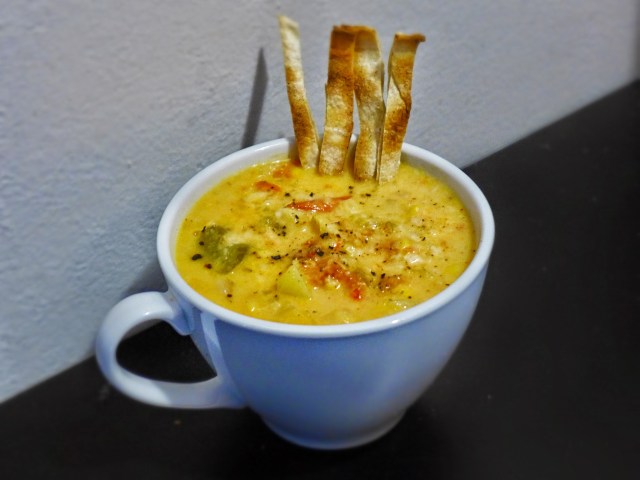 This recipe is so easy it’s barely even really a recipe. But it’s absolutely lovely, and so handy to keep around the kitchen. You ready for this? 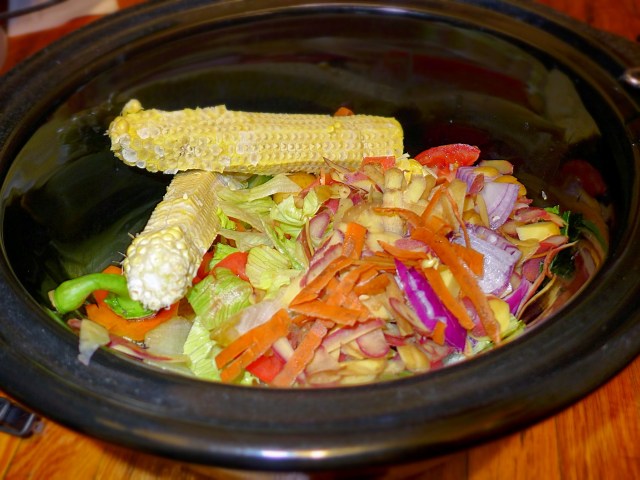 Throw all the vegetable scraps into a crock pot.

Cover the scraps with water. Turn on your slow cooker to low, put the lid on, and leave overnight. 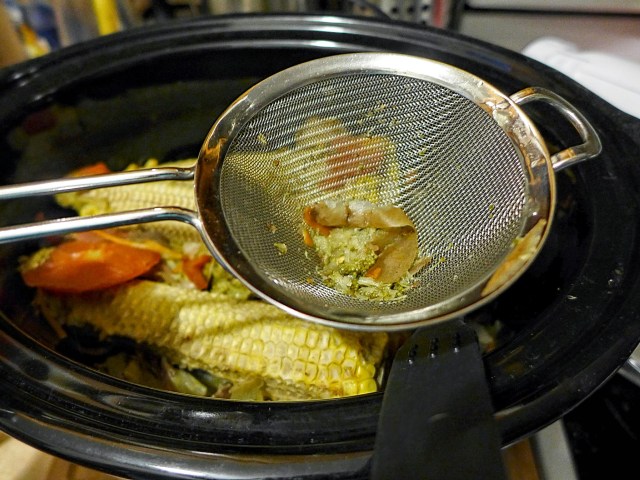 In the morning, remove from heat. Strain the vegetable scraps from the liquid. Add salt and pepper to taste. Fresh herbs are also great, but not necessary. I like to leave mine pretty plain so that I can flavor it later to match whatever I’m cooking. 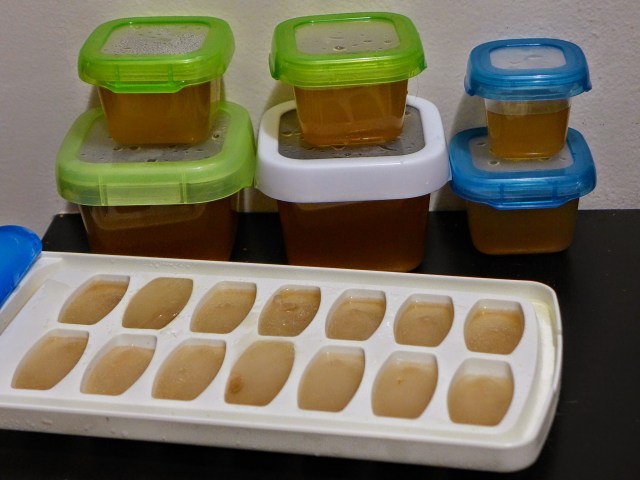 That’s it! Now you have vegetable broth, which you can keep on hand as a soup base or to add extra flavor when cooking. I like to put mine in mini locktop containers and covered ice cube trays to freeze in small portions. Then I just pop it in the microwave or put it straight in a pan on the stovetop when I’m ready to use it. It’s cheap, eco-friendly, low in sodium, and delicious.