To many people, the movement for organic, local, sustainably-raised food is unquestionably by and for liberal, middle-class Whole Foods customers and NPR enthusiasts — probably white, probably college educated, probably not particularly worried about the availability of food if they’re able to be so concerned about its quality. It’s surprisingly easy to forget that in order for organic, local foods to exist, there need to first be local organic farms, and for that we must first have farmers — a group that’s usually conceived of as being working class, undereducated (at least in academic pursuits), and politically and socially conservative (although farm subsidies necessarily set them a little apart from the “no government intervention” end of the spectrum). How does that disconnect in our framing of these two things happen? Organic farming is hard. It’s more expensive and takes a lot more effort than farming with pesticides. Given that we’re more conscious than we have been in generations of where our food comes from, we manage to be pretty unaware of who our food comes from. If you care that the carrots you’re buying are locally grown and biodynamic, you have at least one thing in common with the person who grew them, and you might have even more. For instance: maybe the farmer who grew them was queer. 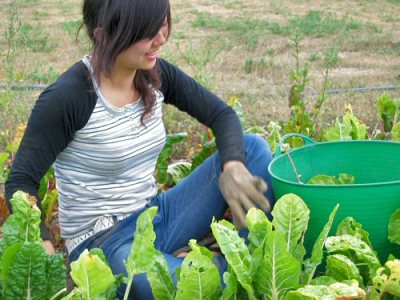 Obviously queer people are, in reality, everywhere; even if they’re not out, they’re in blockbuster movies, government positions, teaching in schools, and bagging your groceries. But queers with traditionally working-class or blue-collar jobs are often invisible. In the same way that not everyone understands the intersection between generally-codified-as-liberal food politics and the livelihoods of the people who make our food, we may not be aware of the fact that identity politics are at play as well. Luckily, Grist has spotlighted a few examples of queer farmers and farms, and it’s an interesting meditation on the what occupying an unorthodox identity has to do with pursuing unorthodox ways of producing food.

Johanna Rosen and Jade Walker run Mill Creek Farm, which operates in West Philly and calls itself a “community-based, nonprofit, educational farm,” running youth programs and integrating the community while running three farm stands. She tells Grist that “I don’t make my work about me or being gay… But I feel like urban farmers are queering the food system. Just by bringing fresh food to this neighborhood we’re mixing it up.”  Others agree:

“A lot of people want to get back to the roots of growing and producing wholesome food and knowing where it comes from,” says Courtney Skeeba. She and her partner Denise Whitesides of Homestead Ranch in Lecompton, Kan., raise goats and produce products such as hand cream and soap with goat’s milk. She believes this active curiosity comes naturally to LGBT folks. “As a group of individuals, queer people have a tendency to be a bit more aware and active,” she says.

Others noted the fact that urban and/or sustainable farming was a kind of nonconformist statement, and that “there’s room for experimentation and for things to shift and change,” It’s indeed easy to see why a demographic that’s personally invested in social change, fixing broken systems and providing options and empowering choice in marginalized communities. Looked at that way, “queer urban sustainable farming” isn’t such a hard concept to wrap your head around. Mill Creek Farm even has its own beautifully shot and produced video spotlight:

But looking at it this way, it seems like queer farmers are almost an outgrowth of the local and sustainable food movement; a product of the political moment. Without evoking Brokeback Mountain too blatantly, it seems important to mention that there’s always been queer representation in the farming community as in most traditionally working-class or even masculine/physically demanding lines of work, even if it hasn’t always been as easy to talk about or politicized as it is right now. For instance, Frank Baylis, who’s been raising cattle with his partner for the past 22 years.

“So I walk into the local feed store, and all the usual guys are hanging out by the pot-bellied stove, but there’s a new guy there. I say a few words as I’m getting my stuff, and then walk out. Forgetting something, I come back in and overhear the new guy ask, ‘He queer?’ One of the other guys says, ‘Yeah, but we like that queer.'” That was 30 years ago. Baylis realized it could have been different. “I’ve been very lucky,” he adds. “I’m good at what I do and the locals don’t really care if I’m gay.”

Baylis is also opposed to the “commercial, mass-produced” system of factory farming, but he doesn’t seem to have entered the industry because he was impassioned about food politics. That’s not to slight Rosen, Walker or any of the other queer farmers quoted, but to draw attention to the fact that queer people have always been here, anyplace that “here” is. We’re police officers, construction workers, park rangers, factory employees, postal workers — we’re everywhere, not just at farmer’s markets and local craft shops that sell tote bags with embroidered swallows on them. It’s great that there’s growing recognition of the fact that queer goals and values align and intersect with other movements’s values and goals, and that there are things they can lend to and learn from each other. But it’s maybe more important to recognize that our goals and values have always informed social and economic change, even as broad as the growth of the farming industry in the US, because queer people have always been a part of it. Being out as a local sustainable farmer does ‘queer the food system,’ but we should never forget that we’ve always been there, making the world more like one that we want to live in just by being in it.