Celebrities! They’re just like us! They date each other and sometimes they date people who aren’t celebrities! They could be dating you, but they probably aren’t. No matter what, one thing’s for certain — famous people will always take their loved ones to the airport, where they will wear comfortable clothes and appear super casual, and the Daily News will call them “roommates,” “gal pals” or “good friends.” Here’s what’s going on with some of our favourite celebrity pairings:

If you read the comments on Hannah’s Instagram (something I advise you to avoid whenever possible), you may have noticed fans’ rabid curiosity about Hannah’s relationship with fellow YouTuber (and recently out queer person) Ingrid Nilsen. The two seemed to be in the same location at the same time, and sometimes creepers would notice other evidence of Ingrid in the backgrounds of Hannah’s photos. Turns out, all the fans’ speculation was dead on; Hart recently confirmed the relationship to DIVA Magazine. In the interview, Hart says it’s amazing to date a fellow YouTuber because Ingrid gets what she does, and that the pair were good friends until “circumstances kind of aligned.” She goes on to describe Nilsen as “one of the most brilliant, soulful people I’ve ever met.” Congratulations, you crazy kids. 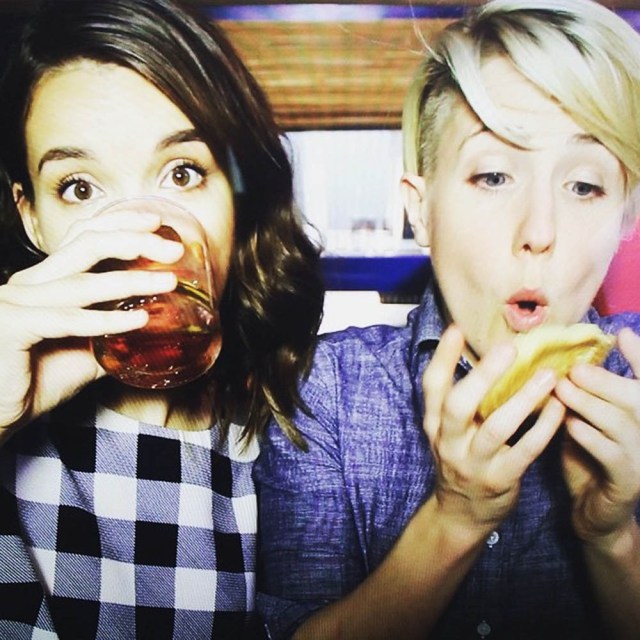 These people are into each other.

Ellen Page has been doing a ton of press for her upcoming film Freeheld, in which she plays a queer woman opposite Julianne Moore — so naturally, a lot of her interviews have revolved around her coming out last year and what that’s meant to her. At the movie’s premiere at the Toronto Film Fest, she brought along a special plus one — her girlfriend, tall surfer and confirmed babe Samantha Thomas. The two have been low-key dating for several months, but when E! News asked Page about her newly public romance, Page replied, “Walking down the carpet holding my girlfriend’s hand is pretty special. It’s pretty awesome.” Later, the pair were spotted hanging out at every lesbian actress’ favorite place, the airport. Tabloids reported the pair looking “comfortable” and “casual,” which is journalist-speak for “gay as blazes.”

Ukulele wizard Julia Nunes‘ new album Some Feelings is reportedly about “going from numb to not,” documenting her recovery from a previous breakup — and the process of falling in love again. This means that there’s a bunch of songs on the new record about wanting to make out with Dannielle Owens-Reid, and if you’ve ever heard these two people talk about or look at one another other it’s very clear that these two humans are head over heels in love. The record is streaming on Nerdist right now if you’d like to experience some emotions.

Demi Lovato and You, Probably

So like, we all agree that “Cool For The Summer” is a song about kissing ladies, right? Last week, Demi Lovato appeared on Alan Carr’s show and said she was “definitely not denying” that the song was about experimenting with girls. Carr joked that he’d experimented with homosexuality once and that it had “stuck,” and Demi followed up — “Hey, I didn’t say that it didn’t stick either. I didn’t say that it didn’t stick!” Did she just admit to being bisexual? Maybe — it’s hard to tell. Lovato allegedly slept with Ruby Rose once, and she is dating Wilmer Valderrama; as far as we know, Wilmer Valderrama is a gateway drug to bisexuality (see: Lindsay Lohan). Lovato’s rep told Buzzfeed earlier this year that Demi is “just young and having fun,” which is publicist-speak for “Demi is out there prowling for girls, and probably she’d like to take you out for drinks.” Judge for yourself: