Hello, cyborgs and robocops! It’s been another wild and wonderful week since our last Friday Open Thread, in which we post analytical essays and readers respond in kind with a 2-3 paragraph academic critique. JK! It’s the space where we shoot the shit with each other because eventually, when we all conquer the world, we wanna make sure we know the right people.

We’ve added some new faces to our ranks here at Autostraddle recently, including five new Contributing Editors. Rather than letting y’all slowly get to know each other, we’re gonna cut to the chase right here, right now. This is a no-holds-barred space for familiarizing yourself with our newest shining stars. We’re putting a twist on the classic Friday Open Thread algorithm: instead of one host, you’re getting all five at once, and instead of one weekly theme, they’ve each got their own questions to allow them to look deep into your hearts. Some things never change, though, so feel free to answer those questions, ask questions in response, or even go forth and tell us all about your life with no regard for any of this, which is fabulous and rebellious of you. Remember to comment on each other’s posts and also to post pictures of your pets and/or latest projects! 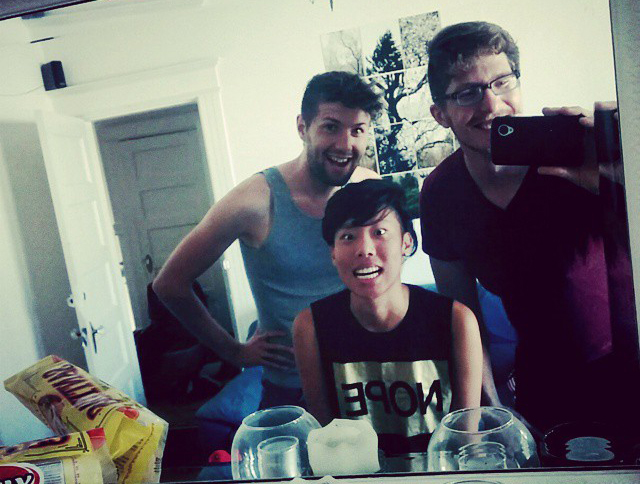 Plz note in the caption that we all have essentially the same haircut, yet mine is definitely the best.

A few days ago I did an Incredibly Adult thing and bought two versions of something I liked in case I lost one of them, because I’m a scatter-brained fool who loses things all the time. Okay, tee-bee-aech it was cheap sunglasses, I finally learned to preemptively buy two pairs of really cheap sunglasses. I stand by this gesture of personal growth, and it got me thinking about all less cheap things I have loved and lost, including a wonderfully soft wool sweater, an iPod Touch and a grinder of great sentimental value. I feel like you know that feel, too, so let’s be friends and share: what are the best things you’ve loved and lost? Do you remember how you lost them, is each loss imprinted on your heart forever? Or were some things lost in a move or you swear you had it on you last week, and you’re still holding out hope for it to reappear when you finally reorganize your room? C’mon, we’re buddies, let it out and we’ll get through this together. 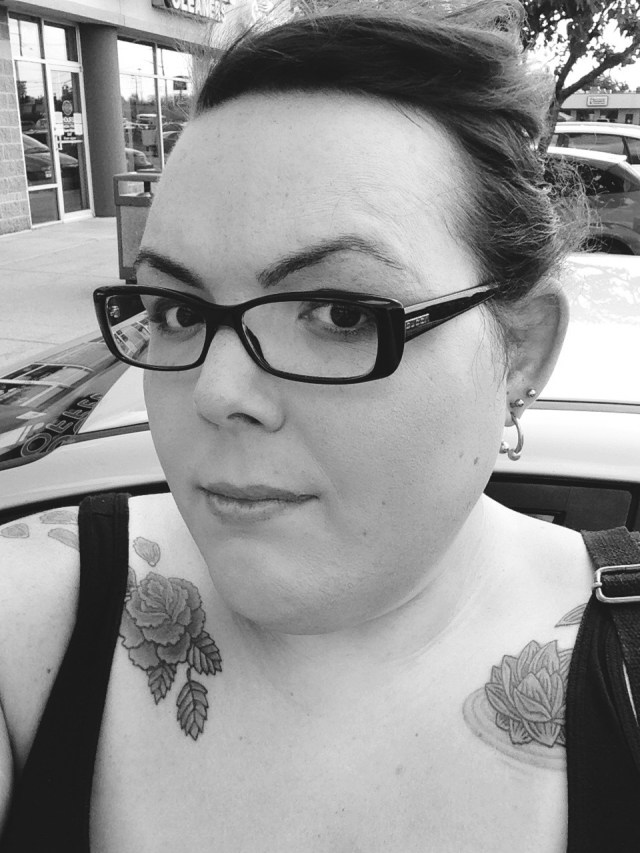 Some of the worst (and often most hilarious) anti-queer propaganda talks about “warning signs” signs that your child might be dabbling in the “homosexual lifestyle” or other supposedly “sinful” activities. While I think that’s all a giant load of giraffe droppings, I have these moments when I look at my younger self, knowing I turned out to be queer and trans, and think “well damn, THAT should have been a clue to SOMEONE!” While I’m not saying that ALL fourteen year olds who are CAMAB and obsessed with Tori Amos turn out to be trans lesbians, this one certainly did. So, I’m curious straddlers…do you have any childhood or adolescent moments that you look back on and think, “Wow, how can it be a surprise to ANYONE that I turned out to be queer?” 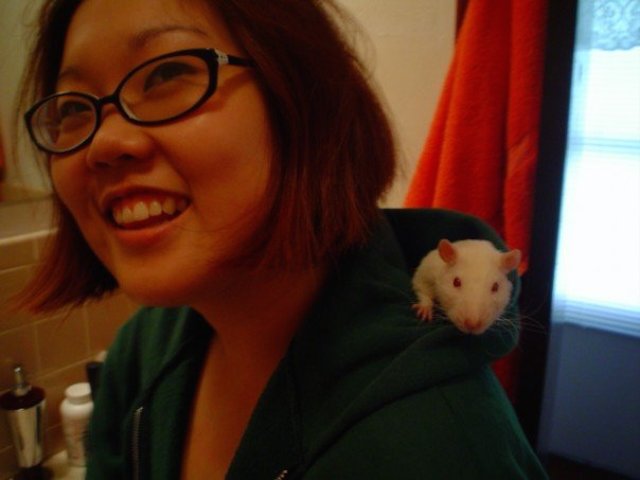 The front desk staff at our small-pet-specialist vet’s office revealed to us that they used to talk about who, from their client list, they would prefer as owners if they were reincarnated as tiny, adorable furbabies. My partner and I were, apparently, in the top tier of ideal pet parents. We have a very, very, very big love for our furkids and we usually have about a full menagerie of little spoiled babies running around. At one point we had two guinea pigs, a rabbit, a cat, and four rats at the same time. Cage-cleaning Sunday was the freakin’ worst during this period. So. Much. Poop. You don’t even want to know. In our current house, we literally gave one of the bedrooms in our house over to our two rabbits (the buns), who run free in there, and our guinea pigs (the wiggles) who live in a 13.5 square foot pig palace. We also have a weird, weird cat who loves us and hates everything and everyone that is not us.

I think if I could be any pet, I’d like to be a turtle, but I’m not that chill at all. My ex said I’d be a hamster because I run around like a maniac and I like to carry food in my cheek pouches. I’d prefer to be a rat, if I have to be a small animal, because rats are super smart and social and resilient. And they eat everything. I’d be a rat. And I’d specifically like to be my good friend Lauren’s rat, because she would totally let me ride on her shoulder like a boss and she would take me to the vet if I got cancer (which I probably would because rats love to get cancer) and she would give me lots of ratty treats. That’s my plan. Anyway, if you could be any person’s pet in your next life, what kind of pet would you come back as and who would you choose to be your pet parent(s)? 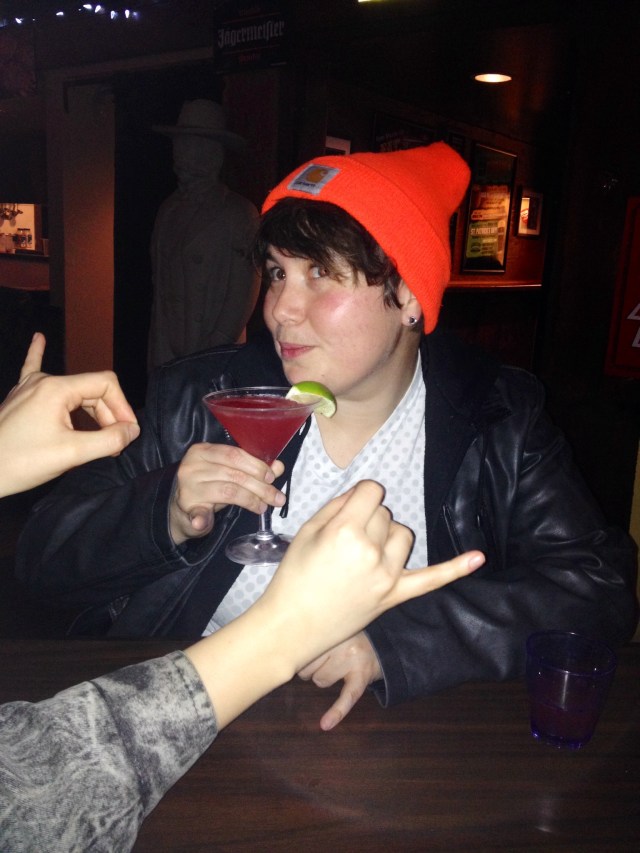 Portland recently finished a week long celebration of the hamburger sponsored by one of our alternative newspapers. Portland Burger Week offered $5 burgers at nearly 20 restaurants known for their burg’. I wanted to try no less than 8 of the specialties including the char siu which had ground Laurelhurst Market beef patty on brioche, with shaved char siu pork, spicy Chinese mustard, and crunchy Asian pickles. But my stomach and liver probably thank me for only having 4 over the course of the week. My favorite was probably the Venison Focaccia with house-cured pork belly, house pickles, tomato jam, fresh aioli, and a char-grilled Nicky USA venison patty. Even vegetarians were able to get in on the meat fest with a really tasty Hazlenut Beet Burger whose veggie patty consisted of garlic, almonds, brown sugar, red miso, kosher salt, black pepper, peanut butter, wakame, hazelnuts, quinoa, beets, potato starch, white onion, olive oil, served on a toasted bun with Misonaise, Heidi Ho Monterey Jack, carrot ramps and pea shoots. So if you could pick your perfect patty, what would it be and what would you top it with?

I’m Briana AKA Da Baddest Witch. 467 in bruja years but I tell everyone I’m 24. Born to a Dominican immigrants in Upstate New York, raised in the Bible Belt of the Bible Belt, AKA West Michigan, AKA the land responsible for the propagation of shitty Metalcore during the early and mid 2000s. Big mouth radical queenie and proud queer agenda-ist-er. Here’s my latest selfie of me I took at a show in a warehouse at the edge of town called “The Deathhouse.” In case you couldn’t tell I try to live my life like it’s a Gregg Araki film. 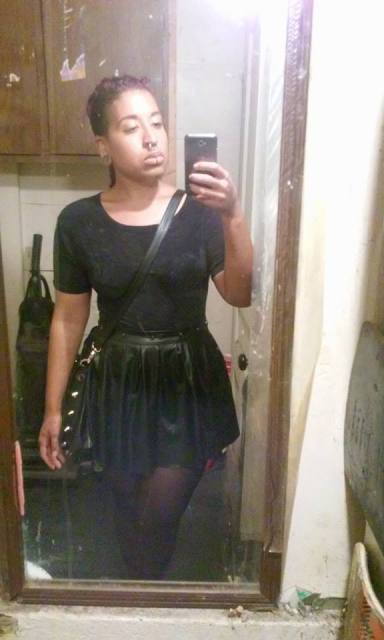 Fun facts: I have 11 holes in my head, some of the stretched. Piercings are funnnn. I don’t like water but I force myself to drink it because you need it to live, annoyingly enough. My calico cat has a heart-shaped birthmark on her nose. Last but not least, I recently discovered I know how to make a mean caramelized onion, spinach, provolone, goat cheese and balsamic and red wine vinegar reduction sourdough sandwich. Really there’s not too much fun about me let’s be honest.

During Autostraddle Brunch, there was an animated discussion about some commonly heard queer terminology and their usage, the terms being Androgynous, Butch, and Tomboy. Many folks held that androgynous seems to be used more by straight people especially in the fashion industry and refers to a form of feminine-leaning genderqueer style expression or presentation (though not necessarily a gender identity), but is often vet limited in how inclusive it is (androgynous people are always pale white thin femme-ish people). People also brought up how there has been usages of the term by queer people to describe their gender. Butch seemed to be seen as bit more restrictive in terms of masculine binary expression than tomboy, which many people felt more comfortable with and seemed to have less boundaries and seem to suggest maybe a “softer” butch. How do ya’ll view, use, and parse the terms butch, androgynous, and Tomboy, if at all? Do you have problems with their usage?

1. Find a photo!This is the easy part. Find a photo on the web, right click (on a Mac, control+click), hit “Copy Image URL” and then…