She is Sitting in the Night is the tarot book I’ve always wanted to write. It’s a queer tarot guidebook and a celebration of an 80s feminist tarot deck rolled into one; a book of beautiful and radical tarot card meanings, and also an important document, a conversation across generations of feminism and LGBTQ politics.

The project is a collaboration between organiser Rima Athar, writer and tarotist Oliver Pickle, and artist Ruth West, creator of Thea’s Tarot, which was published in 1984 and out of print until this project brought it out from storage. Rima’s idea was to take a deck with a second-wave feminist/lesbian ethos and reinterpret the cards via the language and experience of modern queer culture, creating a framework for tarot that would truly resonate with queer folks. At the same time, she wanted to celebrate and document an important work of feminist art. 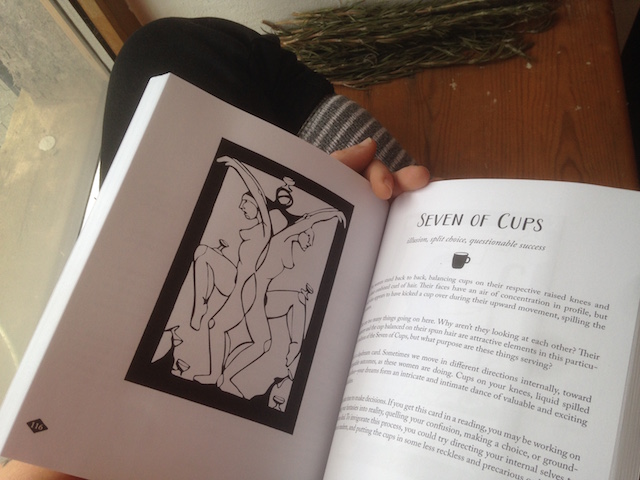 In the introduction to She Is Sitting, Rima describes her search for a feminist tarot deck, and her frustration at continually butting up against the problematic imagery familiar to many tarot users. If you struggle with the often patriarchal, heteronormative and hierarchical symbolism within a lot of tarot decks, you’ll relate to her feelings:

The more I looked at the artwork within various decks, the more the representation seemed to represent a conspicuously absent story. Like so much of history that is rewritten by erasing what came before, I was sure there had to be decks that reflected a different worldview, a feminist worldview.

When I came across archived images of Thea’s Tarot by Ruth West, I knew I had found just that. Here was a deck full of hella-queer women: lesbians in flannel shirts, holding hands, having picnics, writing ideas down, sharing sharing food, gardening and making all kinds of love. Here were women of many shapes and sizes and colors, from historical and contemporary walks of live, basking in the glory of day-to-day life. 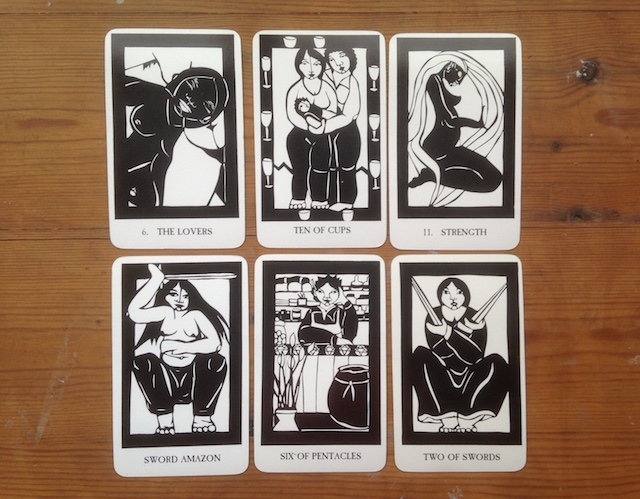 Rima describes the process of creating this book through conversations with Oliver and Ruth. There are some beautiful and thought-provoking extracts from Ruth’s emails, giving life and shape to the vernacular feminism we see in the cards. It’s so clear how much time all three contributed to discussing their individual politics, and the sense of respect and understanding in this introduction is inspiring. As Rima explains:

Of course, revisiting lesbian feminist histories from the 70s and 80s, and reinterpreting artwork from that era to reflect a more more current queer feminist politics in the 2010s is not without its challenges. How exactly do you make a lesbian deck queer? How do you play with gender in a way that still respects the woman-centred focus of this deck, while allowing room for a politics of fluid gender boundaries? How do you address and represent images and/or perspectives that may come across as challenging, especially if you don’t know enough of the history? Perhaps most importantly, how do you do all that, while keeping it fun, playful, and down to earth? 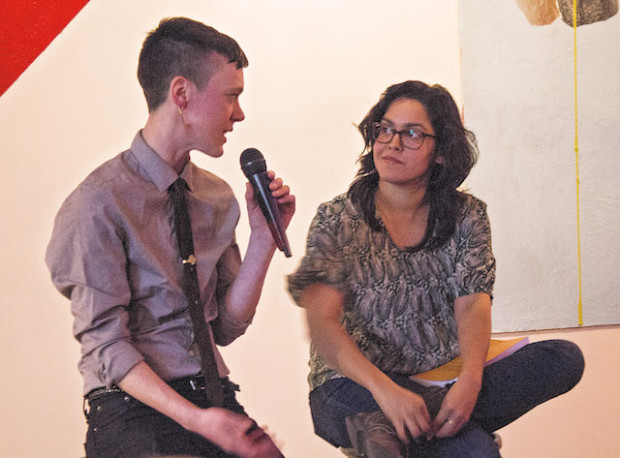 Oliver and Rima at the book launch in Montreal, April 2015. Photograph © Jackson Ezra

I first came across She Is Sitting in the Night when fellow Autostraddler Hermia sent me a heads up. She was planning to attend the book launch in Montreal, and did I want her to cover it for my blog? Obviously the answer was yes, and you can read her write-up here! I got my copy shortly after, and since then I’ve read it cover to cover three times. It’s no exaggeration to say that it has become my absolute favourite tarot book, alongside Rachel Pollack’s classic Seventy Eight Degrees of Wisdom (which Oliver also name-checks as an influence on their own work.)

It’s a generously-sized book, with 189 pages filled with heartfelt and radical ideas about what those 78 cards mean, illustrated with full-page illustrations from Thea’s Tarot. It’s published by the awesome Montreal-based Metonomy Press. 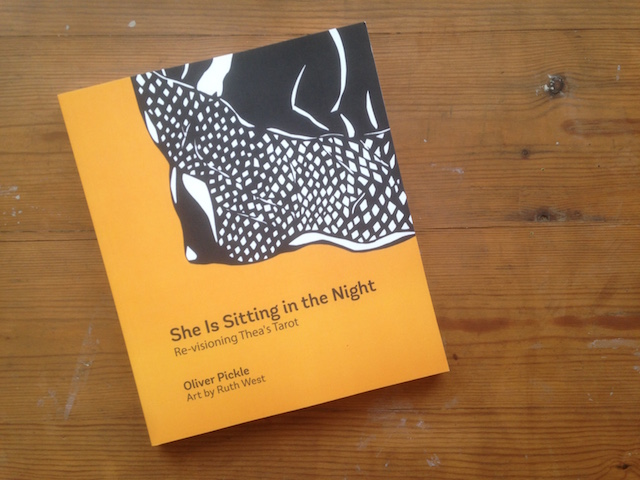 Oliver has provided a really helpful introduction to tarot itself at the start of the book, with a great run-through of the four suits, the numbers, the court cards (or in this case ‘face cards’) and an overview of how to do readings. I really feel that this is a book that you could pick up as a newcomer to tarot and begin getting the hang of using your cards. It’s accessible and friendly, but detailed too, and as an experienced tarot reader I still learned loads from Oliver’s perspectives.

I have mostly read in bars or on bedspreads, late at night or holding down the cards on picnic tables or on the grass in parks, while my friends played baseball or gossiped.

My blithe attitude toward tarot is what has made me able to choose to do readings and to use the cards at all. I hope it has also allowed me to introduce its possibilities for analysis and healing to people who would otherwise have shied away from it. […] I hope that the informed but casual queering of an already subversive revisionist deck will be inviting to those unfamiliar with the tarot. I also hope that it, without being comprehensive, honours and contributes something to those who take it seriously, which I clearly do deep down inside.

Oliver’s interpretations are down-to-earth, helpful and kind, presenting many of the possible ways we — as queer-identifying folks especially — aspire to be more creative, more radical, more thoughtful, more energised in our lives without judgement, offering many examples of practical ways we can move forwards. There’s a sense of familiarity in these card interpretations — I found myself saying ‘yes, this! This is just how it feels!’ so many times as I read over the different cards. 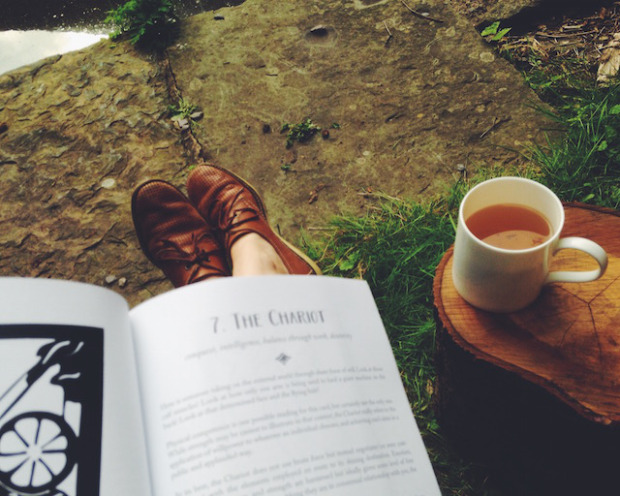 They ground universal archetypes and often vague-feeling tarot concepts in the dirt of our daily lives, making tarot a tool anyone can use to understand the gritty, real details of their situation. There’s also lots of exploration of how key themes in tarot manifest in the experiences of people trying to do relationships and community differently. Oliver references LGBTQ struggles, the weight of sexism and cishetnormativity, and the more private effects of societal oppression, alongside personal and political ideas about revolution, transformation and liberation.

I love how they mix up pronouns throughout the book — many cards are she, many are they, some are it — really normalising the feeling that no card belongs to one specific gender. Ideas of masculine and feminine are played with and explored, and never essentialised.

The Creator (The Empress)

The Creator appears at the beginning of the deck because it represents some of the foundational elements of life: nature, abundance, undifferentiated passion. If we come from histories or social contexts steeped in sexism or the devaluation of femininity, it can be helpful to think hard about receptiveness as a strong and positive characteristic. It could be healing to focus on the good in these qualities in your life now and see how much you can open up to them on your own terms.

Do you need a copy of Thea’s Tarot to use this book? Not at all. The book’s card descriptions do centre on the cards in Thea’s Tarot, so it is a particular delight to read it with the cards in your hand, but it can be used with any tarot deck that follows the usual system. Thea’s Tarot has renamed some of the cards, so if you’re not 100% sure which cards in the book correspond to which in your own deck, you can always write your familiar card names in the book. 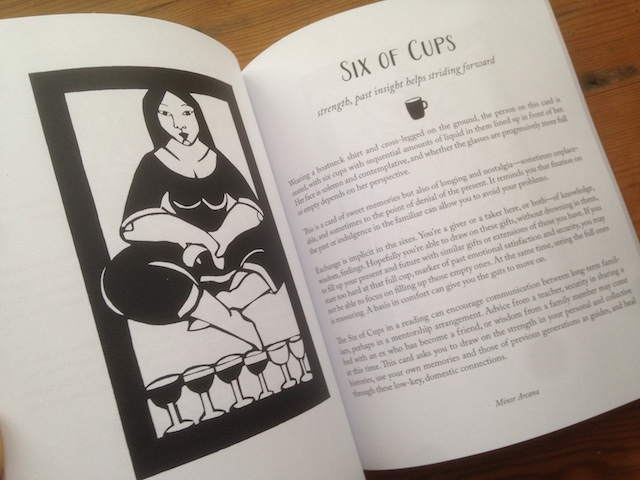 A few more of my favourite extracts…

This figure’s hair floats in an explosion around her head, right off the edge of the card. One pointy boob is caught in her clothing, the other hangs to the side. … Her arms are in the air. She is wild! It’s pretty fun being her!

Here is someone optimistic, and probably reckless. Who knows if she meant to have half her chest hanging out of her dress, but she doesn’t care either way. She is cool.

This card asks you to be accountable to yourself and others. To make art for real. To start restructuring the non-profit that you work for that actually has the shittiest labour practices. To think about how, though other parties were responsible too, you were partially responsible … for the conditions that led to your breakup, you intolerable living situation, your tepid family dynamics.

If you’re in Canada/US, you can buy She Is Sitting in the Night directly from Metonomy Press, or, outside of those areas, I’m totally excited and proud to say it’s in stock in my shop!

Metonymy also has a limited number of Thea’s Tarot decks available to buy — if you’re interested in owning a little piece of cult feminist tarot history, I really recommend you do. My copy has a delightful been-stored-under-the-bed-since-the-80s kind of smell to it, like a newly rediscovered old book. I love it and use it often.