Summer as an adult is such a mean trick. For most of your life up to this point, summertime was break time, when you could do whatever you want all day and sleep past noon. Then suddenly you’re an adult and your boss doesn’t care that you’ve basically been programmed to laze around when the days get long and hot, or that you stayed up until three rewatching Orange is the New Black and IM-ing with a friend trying to find a less compelling character than Larry (“Ruiz’s boyfriend who pretty much just says ‘yeah’?” “Nah, I totally want to know what his deal is.” “The chicken?” “The chicken who is smarter than all the other chickens? Are you even trying”), or even that it’s 90 degrees outside and the thought of so much as touching a hot coffee mug is too horrifying to contemplate. You still have to show up for work at eight.

Obviously you need a cold rush of caffeine, but a morning Mountain Dew is just not right, and that daily Frappuccino habit is siphoning off money better spent on bourbon (maybe that one’s mainly just my deal), so what to do? Here are a couple of simple solutions that you can mostly take care of the night or day(s) before.

Here at Autostraddle we’ve already covered the magic that is cold-brew coffee, which I use as the base for all my iced coffees. I’ll add in some knowledge about iced tea and DIY flavoured syrups and soon you’ll be approaching your summer morning routine with, if not excitement, at least not abject horror. 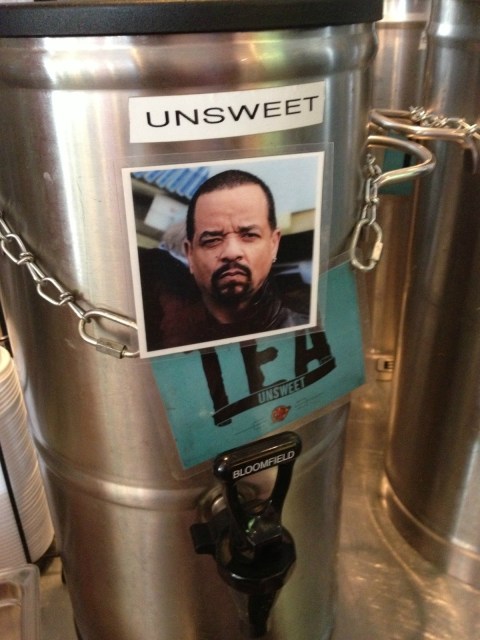 You can either make iced tea by the pitcher or by the glass. It’s not just about multiplying the amounts of everything either; they’re totally different procedures. I’m Southern so as soon as the thermometer hits 80 some deep ancestral urge compels me to drink large glasses of iced tea round the clock, so I usually make it by the pitcher. Some general tea-making guidelines: for regular-strength tea use one teabag or one teaspoon of loose tea per cup of water, time your tea-brewing so it’s strong enough but not bitter (2-3 minutes for green or white tea, 3-5 minutes for black, and 7-10 minutes for herbals), most people will want more sweetening in iced tea than they would in the same tea served hot because cold dulls the taste buds, add sugar when the tea is hot or use syrups (see below).

By the glass: Steep half the amount of water you want double strength (so to make a pint glass of tea, steep 2 tsp/tea bags in 8 ounces of water), stir in sugar or honey then steep for the appropriate time for the type of tea. Fill your glass completely with ice, then strain tea into glass. Add tiny umbrella and drink (possibly optional, but I wouldn’t risk it). 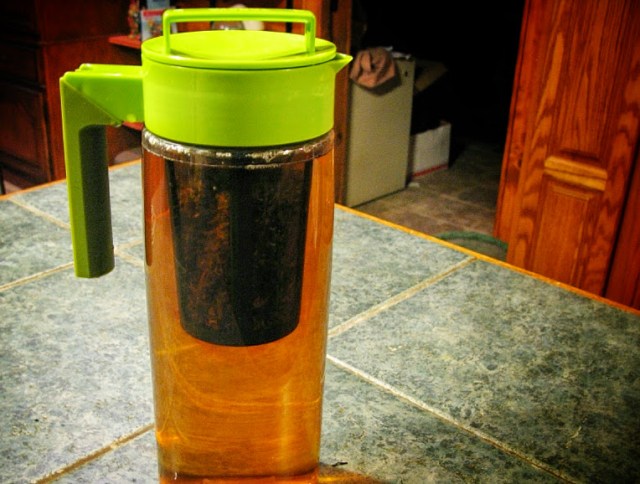 By the pitcher: I like loose tea, so I use this fancy infuser pitcher, but you can also use teabags or make your own with disposable tea filters. For a 2 quart/liter pitcher, boil 2 quarts of water and put either 6 teabags or 2 Tbsp loose tea in the pitcher with desired amount of sugar, steep for the recommended time, then remove tea. Let the tea cool completely to room temperature, then put in the fridge. To keep iced tea from turning cloudy you either have to flash-chill it (as above for the single glass), or let it cool really, really slowly. 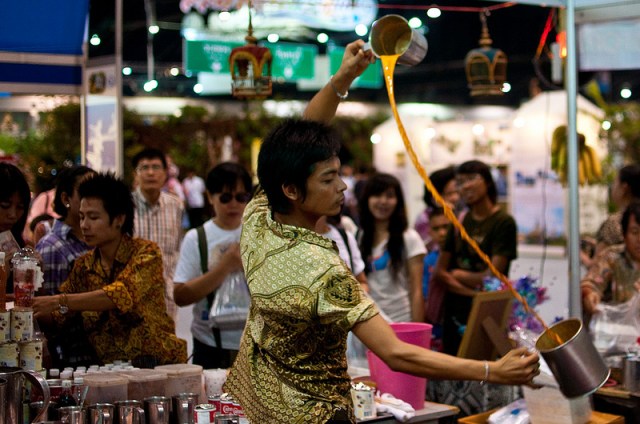 THIS COULD BE YOU / via Mark Fischer

Unlike sugar or honey, simple syrups dissolve cleanly and uniformly in ice water so they are perfect for iced lattes and all sorts of cocktails. Even better, you can easily add flavours when making your syrups and then before you know it you are making clones of your favorite coffee shop drinks in a minute for about a fifth the price.

Combine equal amounts of sugar and water in a small saucepan. Bring to a boil, stirring constantly to dissolve sugar, and leave boiling for 3 minutes. Let cool before using. It’ll keep almost indefinitely in the pantry or fridge. You can make flavoured syrups by adding fresh herbs, spices, or citrus peels to sugar water before heating, then straining after the syrup has cooled. You can also flavour the syrup by adding about a teaspoon of extracts, such as vanilla or almond, after the syrup has cooled. These flavoured syrups should be kept in the fridge.

Some ideas are listed below: 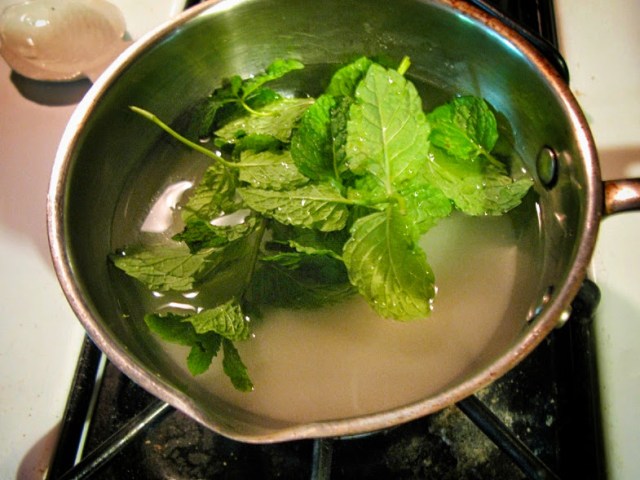 Mint Syrup: This one is equally useful in coffee and tea, and makes for a particularly cool, refreshing summer drink. Just add a large handful of fresh mint to one cup each of sugar and water, then make the syrup as normal. Leave the mint in to steep while the syrup cools completely, then strain before storing.

Chai Spice Syrup: Combine one cup each of water and sugar with 3-4 cinnamon sticks, 4 star anise pods, 8 green cardamom pods, 2-3 slices of fresh ginger, and 1 vanilla bean (if desired). Then make syrup as above, letting it cool completely before straining. Of course you can use this to make iced chais (add to plain black iced tea with about a 1/4 cup of evaporated or coconut milk to taste), but you can also laugh in the face of seasonal drink specials by using it to make an iced pumpkin spice latte, by adding a scoop of pumpkin puree and this syrup to a basic latte.

Nutella Syrup: This may be my greatest contribution to humanity, an easy way to make nutella flavoured coffees. Make simple syrup as above, then as soon as it is done boiling, take it off the heat and whisk in ½ cup of nutella, one spoonful at a time. Whisk until nutella is completely dissolved and the syrup is smooth. It will separate in the fridge, but a little stir will mix it back together.

Honey Syrup: if you prefer the flavour or are avoiding sugar you can make a honey syrup by combining equal parts honey and warm water in a bottle and shaking until the honey totally dissolves in the water. Store this in the fridge and it will keep indefinitely (store it at room temperature and you might accidentally make suspicious and not at all appealing mead).

Spiced Mocha: Make like the ice latte but use Chai Spice syrup and add 2 Tblsp any chocolate syrup (I like Fox’s U-Bet, which I stock up on during passover when it’s made with real sugar instead of corn syrup).

Southern Baptist Special: One day my grandpa emailed me the following joke, thus justifying every other email forward he ever sent me, even the ones about how Obama is a foreign-born Muslim Atheist commie who’s going to use his drones to give us all gay abortions: “There are three truisms about religion: Jews don’t recognize Jesus as the Messiah, Protestants don’t recognize the Pope as the leader of Christianity, and Southern Baptists pretend they don’t recognize each other at the liquor store.” Southern Baptist ladies are famous for drinking tall glasses of something referred to as tea but which might not always be what you’d call 100% tea. Fill a glass ¾ of the way with plain iced black tea. Add 1 ½ oz good sipping bourbon (my current favorite is Bulleit) and ½ oz each mint and honey syrup (or more to taste). Garnish with a sprig of mint.

Frappuccino-like beverage, because that name is totally trademarked or something: okay, this is probably a duh (especially to the approximately 78% of 20-something lesbians who are now or have been baristas), but: dump your iced latte in a blender, add some extra cream, blend, pour, drizzle on some chocolate syrup in a semi-artistic pattern, and top with whipped cream.

Varina has written 7 articles for us.