I am a polyamorous, bisexual slut who dates and fucks people across and beyond the gender spectrum. I was assigned female at birth and still struggle with the internalized belief that my self-worth is based on my desirability. But I have a high sex drive. I’m twenty-two, excellent at sucking dick and have a vagina. Most of the people I’ve fucked are straight, cisgender men.

Nowadays I describe my gender as “somewhere between a genderfluid butch and an agender trans guy.” I’m not a woman, even though I’m read as one by society 99% of the time. Since coming out as trans, the idea of sex with cis guys poses an interesting ethical dilemma: can I fuck a man who describes himself as straight if I’m transmasculine? Am I tricking them into having sex that’s inherently queer, or am I actually betraying myself by letting them see me as a woman?

“Your tits are so sexy,” he tells me. His hands cup my junk through my boxer briefs, but my dick doesn’t twitch in arousal. I’m hyper aware that non-binary people who were assigned female at birth are seen as “women-adjacent,” and today I’m wearing a skirt. That doesn’t make me less trans though. I tell him that today it’s just my chest, not my tits. I don’t tell him that him touching me there makes me dysphoric.

Sex is a huge part of how I connect to the people I love and say “fuck you” to the patriarchy.. If anything, sex has become more important since I came out as trans. When society cannot acknowledge my gender, there is nothing more affirming than a partner sucking my dick rather than eating me out. I’ve been looking for someone to have regular, casual sex with. Even though my Tinder bio reads “unapologetically queer,” I still end up matching with straight cis guys who assume that I’m a cis woman.

I don’t know how I ended up naked: it always makes me feel more vulnerable than I’m comfortable with. Today he didn’t just strip away my clothes while whispering filth into my ear. He stripped me of my gender performance. The confidence with which I carry myself is as much a part of that performance as the sweatshirt that hides my tits, but it’s faux bravado that I can’t bring into a moment of intimacy. His dick is hard and he’s grinning at me, but does he remember that the person who’s about to suck him off isn’t a woman? 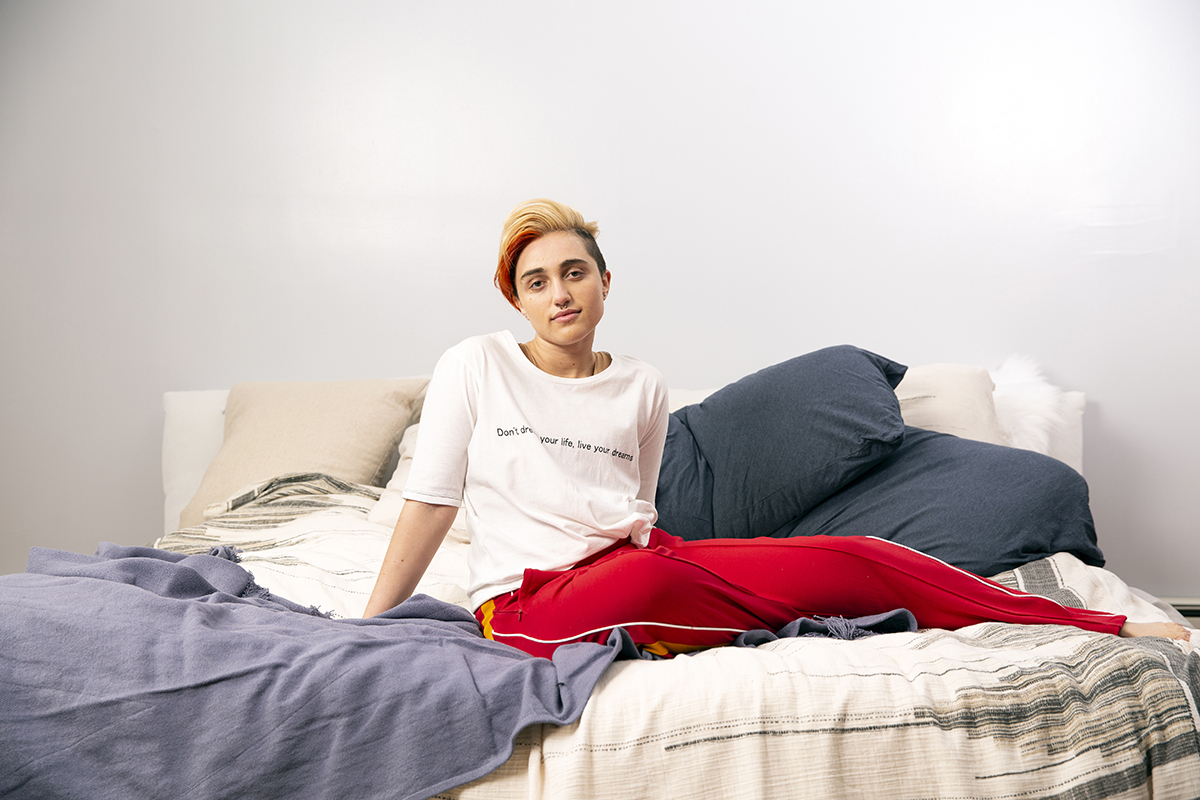 I’m a slut but I’m a picky slut – it’s hard enough finding people who I want to fuck even when I’m not being explicit about my gender identity. Right now, if I had to pick between ticking ‘male’ or ‘female’ on a form, ‘male’ feels far more accurate. It’s not perfect, but it does explain my gender in a way the average cis person can understand. But if I low-key identify as a trans guy then surely straight cis guys wouldn’t want to have sex with me.

“I can’t wait to eat your cunt, beautiful,” he says, and the words are so wrong that I want to cry. The dysphoria floods me with anxiety, and even though I’m still turned on I’ve now also tensed up. Am I brave enough to stop the guy who’s about to give me oral sex to tell him that he’s actually about to suck my dick? Maybe I shouldn’t correct him, because having sex tonight is worth getting misgendered…

If I don’t come out as trans before fucking someone, then I’m undoubtedly letting myself down. I would be forcing myself to fit into society’s expectations of gender roles in order to experience pleasure and intimacy. I love being trans, and I don’t want to have sex with someone who doesn’t see my transness.

But I’d also be letting down the straight, cis men I lust after if I didn’t tell them that I’m trans before we fucked. I pride myself on practicing ethical non-monogamy and having open communication as the bedrock of all of my relationships, and lying about my gender would be a betrayal of those values. It’s not up me to educate everyone that my tits don’t make me a woman, but it’s also not fair to fuck someone under the false pretense that I am one. Deceiving a straight guy into thinking I’m cis because I want to suck his dick would make me feel dirty — and not in a sexy way.

And even if I wanted to lie about my gender, part of me worries that it wouldn’t be safe to. As of August 2020, only eleven US states have banned the gay and trans panic defense. This is a legal strategy in which a defendant claims they acted in a state of violent, temporary insanity because of “unwanted same-sex sexual advances” or because they’d had sex with a trans person who they didn’t know was trans. These defenses are typically used by straight cis men against gay men and trans women, with the most violence being directed at Black trans women. In 2020, the Human Rights Campaign reported that 44 trans and gender non-conforming people were fatally shot — the majority of which were Black transgender women.

I have privilege in that regard. I get misgendered and constantly have my identity dismissed or erased, but in many ways I’m a cis person’s ideal trans person: young, thin, attractive, read as a woman, and white. It’s acceptable for me to advocate for gender-neutral bathrooms at my university. Many people believe it’s unacceptable for a Black trans woman who does sex work to even exist. Being visibly trans is scary — being trans at all is exhausting when you’re constantly fighting for space in a world that says you don’t exist.

“Please can I blow you? We can pretend I’m a girl while I’m sucking your dick, it wouldn’t make you gay.” I type the words and look at them for a long minute before deleting them. I really like this guy, but I like who I am more. He’s told me he’s straight and I’m not going to beg for a fuck when instead we’re building a friendship where he actually sees me.

I don’t think you need to be in love to have great sex, but there does have to be trust. The kind of trust where I’m not tricking someone into thinking that I’m a woman; the kind of trust where I can let someone go down on me without worrying that they see me as one. For me, great sex happens when I’m not afraid to tell a partner to stop or to ask for what I want, and when I trust that they’re comfortable sharing those things with me too.

Sex can be vulnerable. Getting naked exposes all the things we’ve been taught to think of as flaws, like acne or unshaved legs. My favourite kind of sex is when I’m not only exposing my body but baring a little of my soul as well. I want sex where it’s ok if I fart, I want sex with people who won’t respect me any less if I ask them to spank me, and I want sex that includes laughter, trust and intimacy.

“My dick is so hard right now.” “Do you think you could call me ‘boy’ when you’re ordering me to edge myself for you?” “It’s so hot when you call me Daddy.” I’m scrolling back through old messages while wanking, and I can’t believe how many times I was brave enough to be vulnerable, and often how attractive my partners found that vulnerability.

Maybe vulnerability is hot because most of us aren’t only searching for orgasms when we fuck. Whether it’s a one-night stand or a serious relationship, do any of us want to get naked with someone who doesn’t see us?

It took coming out as trans to make me realise that if someone doesn’t see me for who I am — or if I don’t let them see me — then the sex wouldn’t be that satisfying anyway. That’s what I want: to be seen.

Quinn has written 1 article for us.