By Gabrielle and Hansen

How Lace Trim Changed My Life, by Gabrielle

I’m a femme-ish human who wears underwear every day. The everydayness of my relationship with underwear is worth noting because I regularly put my butt into tight thin things that hug the various shapes of my body, including the natural shapes (intentional) and the shapes created by underwear lines (unintentional). And here’s the thing: the widely prescribed solution for underwear lines, thongs, just don’t work for me. I mean I used to wear thongs as a teenager but then I got hips and a little more cushioning around my middle and all of a sudden thongs started doing the opposite of what I wanted them to. Their waist bands dug in, creating an indent on my hips that is way more noticeable and personally uncomfortable than the outline of bikini cut undies showing through my flimsy skinny pants. So what’s a femme-ish lesbo who doesn’t want to go commando and doesn’t want to wear thongs ever again to do?

Then, as though a magical fairy appeared out of the sky to solve my problem, I discovered lace trim. 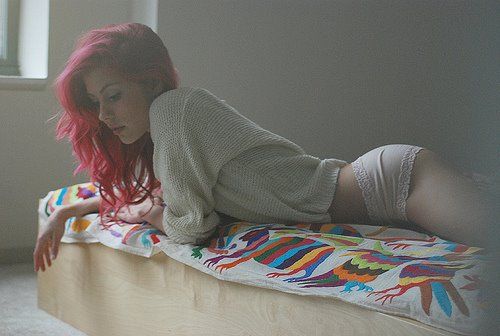 Underwear does not have to have intrusive elastic that digs into you, does not have to shape your pelvic basket with an underwear frame of skin indents. You can find your favorite shape femme-ish underwear with this one magic detail and all of a sudden you won’t see its outline underneath your body-con skirt or your jeggings or whatever hot little number you’re wearing. Since lace trim is wide and soft and doesn’t have that skinny strip of elastic material made by the devil, it just lays flat against your curves. And your date will be like, Is she even wearing underwear? What does it even look like? Lace trim, you guys. Life changing.

I buy mine pretty much exclusively from The Gap, but here are some other cute options for you.

Ode to the Hipster Cut, by Hansen

My love for hipster cut underwear is a lot like my love for vanilla ice cream. I can go into any specialty ice cream store, complete with 32 to 947 flavors, and I will order vanilla. Why? Because it’s tried and true. You know what you’re going to get. You will never be disappointed. I am endlessly teased for my devotion to vanilla ice cream, and although sometimes I go craaazy and get cookies and cream or mint chocolate chip, my favorite will always be the standard vanilla. It is the same with the hipster cut.

I have always been a “Ooh, that’s pretty!” kind of consumer, so sometimes I end up with undies that are less than comfortable. But the hipster cut seemed so boring, you know? That was before I was introduced to Bonds Hipster cut undies. Can I just say that this one brand and one style of underwear changed my life? I just counted, and I have sixteen different pairs of Bonds in my drawer. If that isn’t devotion, I don’t know what is. A few of my pairs has lasted me four years and the elastic has never worn out and the fit is still perfect. I mean, look at this advertisement for Bonds Hipsters versus No Shows. No Show wearing women are dancing around with uncomfortably rigid choreography and the Hipster women get fun colored hair and slow-mo jump sequences. If that doesn’t sway you, I don’t know what will.

Unfortunately, because Bonds cost an arm and a leg to ship to the US of A, I’ve resorted to trying other hipster cut brands. But you know what? They’re still great. Hipster undies are large enough to cover your ass, comfortable enough to move around in, and secure enough that you will never be reaching into your pants to pull the damn things up. You know what I mean. Hipsters can be seamless for tight pants/skirt situations, bright colored for days when you need fluro underwear (there are some days this is just necessary), and even lacy for when those undies might be shown to someone special. When hipster underwear is this versatile, comfortable, and reliable, why bother with anything else?