It’s time again to delve into the deep dark, into the pure light, into the oh-my-goodness-it’s-so-cool-my-heart-may-explode-where-I-stand. Yes, it’s time to get back into understanding feelings, and if that last sentence didn’t already give it away, today I’m going to talk about the emotions that overwhelm our bandwidth, no matter how good or bad they are.

Which brings me to the best term I’ve learned so far in therapy: Zones of Arousal!

Me too, Olivia. Me too.
Via 66.media.tumblr.com

My therapist knows I don’t love therapy. She also knows I don’t love feelings or soft cheeses, but is only concerned about one of those (brie it on, I’ll fight you about it). It’s not uncommon for her to make a suggestion or bring up a theory with the disclaimer, “Look, I know how you feel about these things but…” when she’s about to drop some serious, most-likely-based-on-good-research-but-will-probably-offend-my-precious-sensibilities-because-it-will-likely-mean-I-have-to-make-effort knowledge on me.

‘Zones of Arousal’ was one of these moments, but I warmed to it because the name made me immediately think of erogenous zones. Which is sort the same thing, but these zones are more like emotional erogenous zones.

Technically it means you’ve got big, Capital-F Feelings on the horizon — any kind of feelings, as long as they’re taking up significant space — and they’re affecting your physical presence. This means sexual arousal would probably count, so for the ease of it, I’m going to conflate the two (sorry, therapist).

Let’s think of it as stimulating the ultimate emotional erogenous zone: for a certain amount of time and pressure, it’s like, “Yes, hello, good evening, I am here for this, thanks for clipping your nails beforehand.” It’s a manageable amount of emotion, and you’re able to think and feel at the same time while also feeling safe in your space, and stable enough to experience empathy without it overwhelming you.

But everyone’s bandwidth is different, and too much for too long can become painful, moving past the this-is-great phase and into the wow-this-is-terrible phase.

When we’re emotionally comfortable, it’s called the “optimal arousal zone” or, my other new favorite term, the Window of Tolerance. This is about what we as individuals can tolerate comfortably before we’re pushed into emotional discomfort. We strive to exist within this Window of Tolerance at all times, but that’s impossible because we’re human beings and rarely fit in any sort of box until we’re dead and literally lying in one.

On one side I like the think of as the Numb-Numbs, the hypoarousal zone — too little arousal — you feel flat, unfeeling, unable to care much about anything. It’s like you can’t think, like you’ve got this lion stalking you but you can’t muster the energy to look for it or run from it, and what would it matter, you probably deserve to get eaten alive anyway, just as long as it doesn’t require work on your end. In terms of the emotional erogenous zone, this is the, “Not tonight, I don’t even remember what love feels like,” zone.

On the other side, there’s the hyperarousal zone, aka when your sympathetic nervous system has taken a double shot of espresso and wants to yell at you about it. You get shaky and defensive; your thoughts race; there’s impulsivity, there’s anger, and you feel unsafe, even if that lion is actually just a kitten lounging in a sunbeam. For the emotionally erogenous, it’s the “Yeah OK let’s do this it might fix my problems but who knows WHOA HOLY SHIT WHAT WAS THAT DID YOU SEE THAT, WE GOTTA MOVE THIS PARTY,” zone.

This is only way this metaphor could end.
Via gif-king.com

That ideal window lives between the two, and in people who have compressed and compartmentalized their feelings — people like me! — the window of tolerance that lays between what we can and cannot comfortably tolerate is smaller.

This doesn’t just mean the negative big feelings like sadness or loneliness are the only ones to overwhelm me when they push beyond my window frames. Full-on happiness, excitement, joy — those will push me beyond the point of comfort, too. It doesn’t matter which feeling it is; once it grows from, say, half frequency to full frequency, my nervous system feels attacked and fight-or-flight kicks in.

EVEN THIS RIGHT HERE IS TOO MUCH FOR ME
Via 1.bp.blogspot.com

That feeling of “too much” is familiar to anyone who’s tried drinking from a fire hose, or gone shopping for clothes with my mom. It’s universal, but I never knew it had a name.

And when we can name something we’ve felt lurking, but found ourselves powerless to identify its origins, it stops being this rootless, unmoored anxiety floating around and becomes an idea, and actionable.

So, how actionable are we talking here?

To get back into your preferred Window of Tolerance, the hello-good-evening zone, the plan is to be very present in your situation (mindfulness), then breathe regularly. That might not seem like much, but it’s the building blocks.

Laura Kerr, PhD, who is not my therapist but has amazing materials on her website for this issue, offers some ideas here: 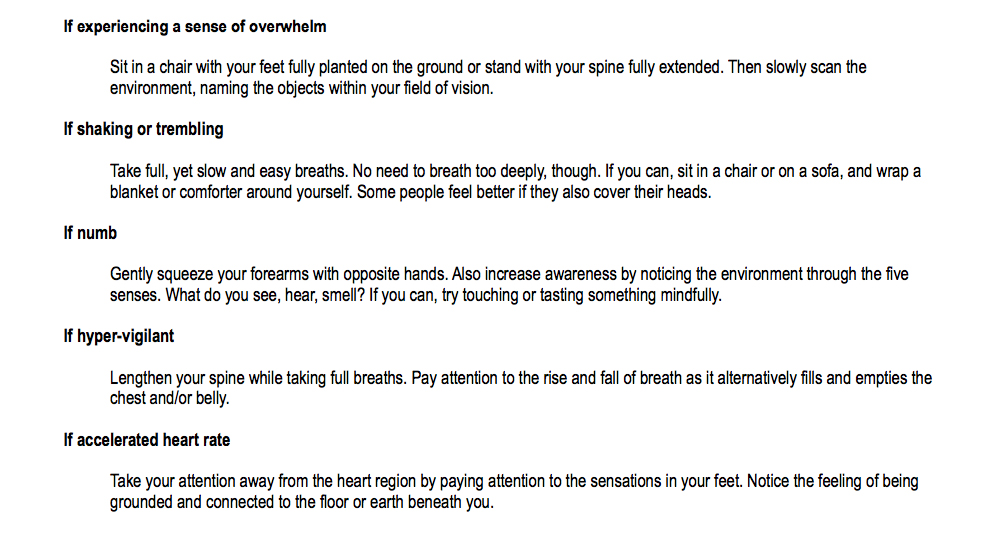 I’ve tried these exercises, and after I’ve gotten over the initial feeling of “This is stupid and your mom is stupid” and actually do it with intention — you have to give it genuine effort, which sucks but pays off — I do calm down and feel better.

The goal now is to start pushing the boundaries on my window frame, to allow slightly outsized feelings to stretch and make the frame groan a bit, little by little, until my default is bigger than my maximum now.

No matter the size of your frame, it’s yours, and that makes it OK. If you aren’t in a safe or solid place emotionally, it’s OK to not push those frames just yet. Explore ways to extend yourself, but always safely. It’s your window, don’t let anyone else tell you how to run it if it means putting you at risk.

But that also means should you so choose and are in a place to do so, it’s yours to modify and deconstruct, to paint or expand however you choose. It’s work. It’s difficult. It makes me cry a lot out of sheer frustration for hating how big those emotions actually feel.

But I’m feeling them. As awful as it is now, I’m laying the groundwork for a stronger, wider foundation, for what I hope becomes a whole damn House of Tolerance, where we can throw a big party and you can visit me any time you like.