Have you heard of Dyke Queen, the zine turned magazine created by Yezmin Villarreal based on “the vision of creating a platform for BIPOC queer and trans artists and writers”? If you have, get excited, because we’re revealing the cover of Dyke Queen Issue 3: Recipes from Queerantine right here and right now on Autostraddle dot com!

And if you haven’t yet? Oh WOW, you are in for a treat. To celebrate the release of Dyke Queen Issue 3: Recipes from Queerantine, we are not only revealing the cover, we are also publishing an interview with Yezmin so they can tell you all about the publication’s origin story, evolution, and incredible third issue in their own words.

You can buy your very own copy of Dyke Queen Issue 3: Recipes from Queerantine right this very instant — what are you waiting for?! 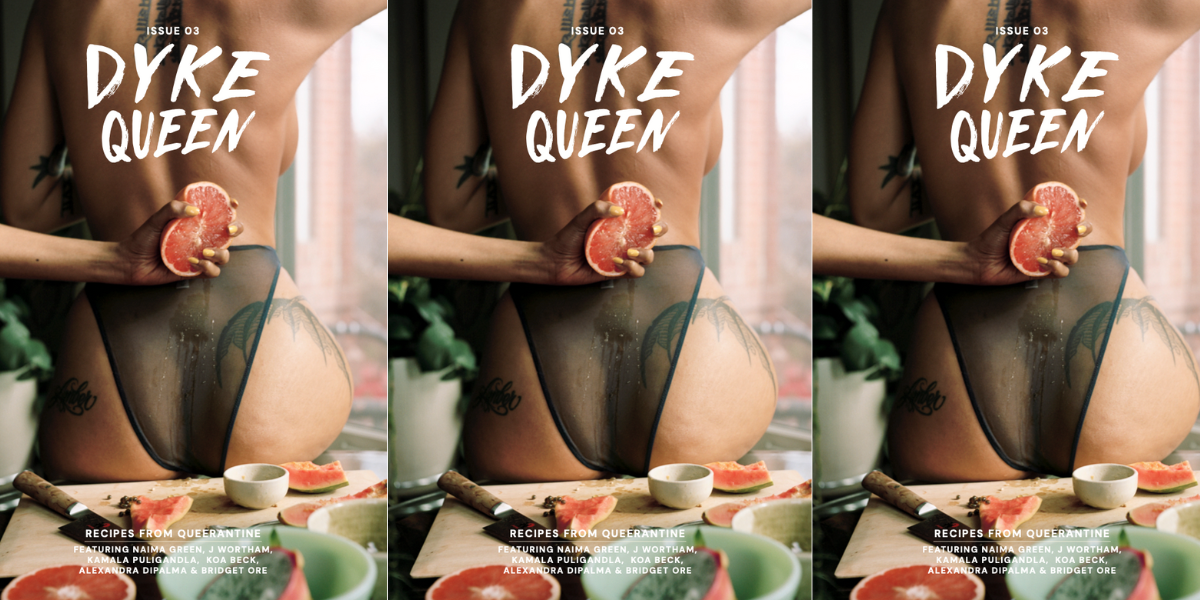 How did you conceive of Dyke Queen? What was the inspiration to start it?

Dyke Queen started out as a note on my iPhone notes app. In 2017, I went to Printed Matter’s L.A. Art Book Fair and was so blown away by the queer zines, art books, magazines and prints I saw everywhere I looked. I was in love.

Although there was a lot of queer representation at the fair, I felt a little let down that I didn’t see many publications for or by queer women. I remember opening my iPhone and typing “Dyke Queen – imaginary dyke mag that I wish existed.” I kept it stored in my phone as a cute idea for later, but to be honest, I had no plans on turning it into anything.

I started writing essays and poems with no agenda. I was writing them to reflect on all the big, queer changes that happened in my life that year. A couple months later, my friend Melissa Ramirez, the creator of the video zine Stumble on Tapes, contacted me to ask if I wanted to create a queer culture zine because she was going to be tabling at L.A. Zine Fest and she wanted to showcase queer creators.

I had never made a zine before, but of course I said yes. Those pieces I wrote eventually came to form the content for our first issue.

I decided to take Toni Morrison’s words to heart: “If there’s a book you want to read, but it hasn’t been written yet, then you must write it.” Inspired by her vision, I applied it to my idea for creating a dyke/lez/queer publication for us by us.

What has the evolution of Dyke Queen looked like? Where did you begin and where are you now? 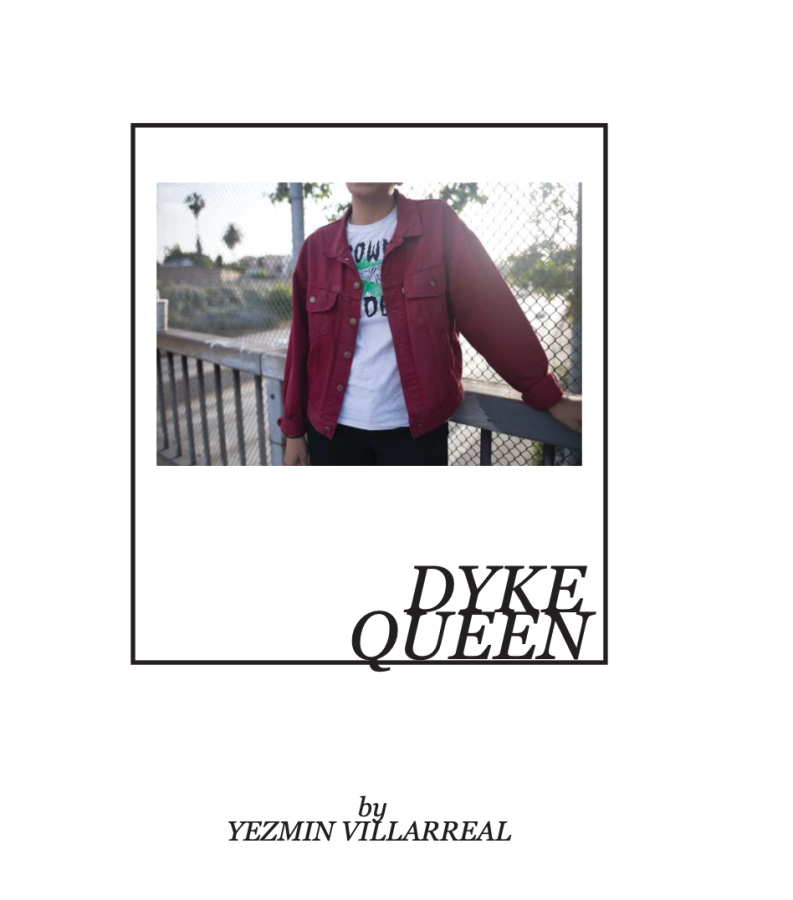 This is the cover of Dyke Queen Issue 1

The first issue was made in collaboration with my friend Bridget Ore, who contributed original illustrations and designed the layout of the zine.

It featured an essay about meeting Eileen Myles and feeling inspired by them, a dyke diagram of all the dyke connections in my life, a piece about buzzing my hair, a poem about the significance of the month of JUNE, and a couple more essays/poems. You know, gay stuff.

It was a DIY personal essay/poetry zine and neither of us ever thought we would make another one or that it was going to become a continuous project.

That was until I saw a post about a zine residency from Hello Mr. Bridget and I applied for the Issues Residency with Dyke Queen as our concept. We wanted to transition Dyke Queen from a DIY personal essay/poetry zine into a magazine.

We got the residency and it was a dream come true. We worked with Ryan Fitzgibbon, Trish Bendix, and Gwen O’Brien as our mentors. Grindr and Into sponsored the residency. 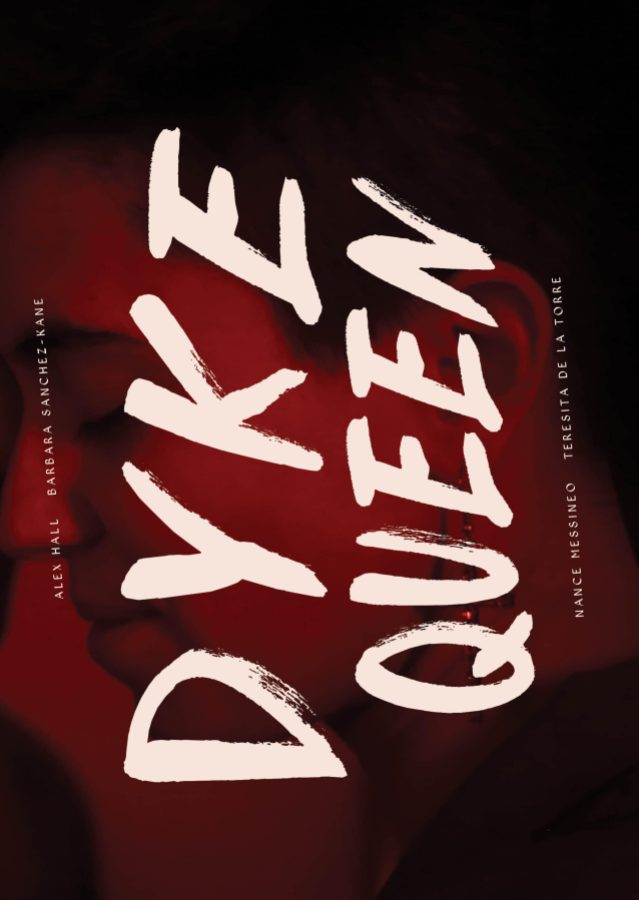 This is the cover of Dyke Queen Issue 2

Making that issue was an amazing experience. I learned a ton from our mentors about what goes into making a magazine. Once the issue was complete, Dyke Queen was published as an insert in the last issue of Hello Mr. and we had a big, fun release party on the rooftop of the Freehand Hotel in Los Angeles to celebrate.

Our third (just released!) issue is Recipes from Queerantine. We started working on it in December of 2020. Given the intense isolation of quarantine and the pandemic, I wanted to make an issue about how queer people coped during the pandemic.

I know a lot of queer people are still processing 2020 and to honor all the changes that everyone went through during that time, we created Recipes from Queerantine. I think it’s important to commemorate quarantine because it had an enormous impact on our personal lives. And to acknowledge that although quarantine was hard, we each found our own way through our specific challenges.

What is your favorite part of publishing Dyke Queen?

My favorite part is curating the issue. Once we have a theme picked out, we work from there and solicit contributors. It all happens organically. From figuring out the theme to reaching out to our dream contributors, we take each step seriously.

I like to think of Dyke Queen as a queer ecosystem and once you’re published, you’re part of our growing community. Dyke Queen alums are always welcome back, whether to recommend ideas or to grace our pages once again in the future.

For example, Salvador de la Torre was published in our second issue and although he’s not in our new issue, he did design a special limited-edition t-shirt that features illustrations inspired by Recipes from Queerantine. 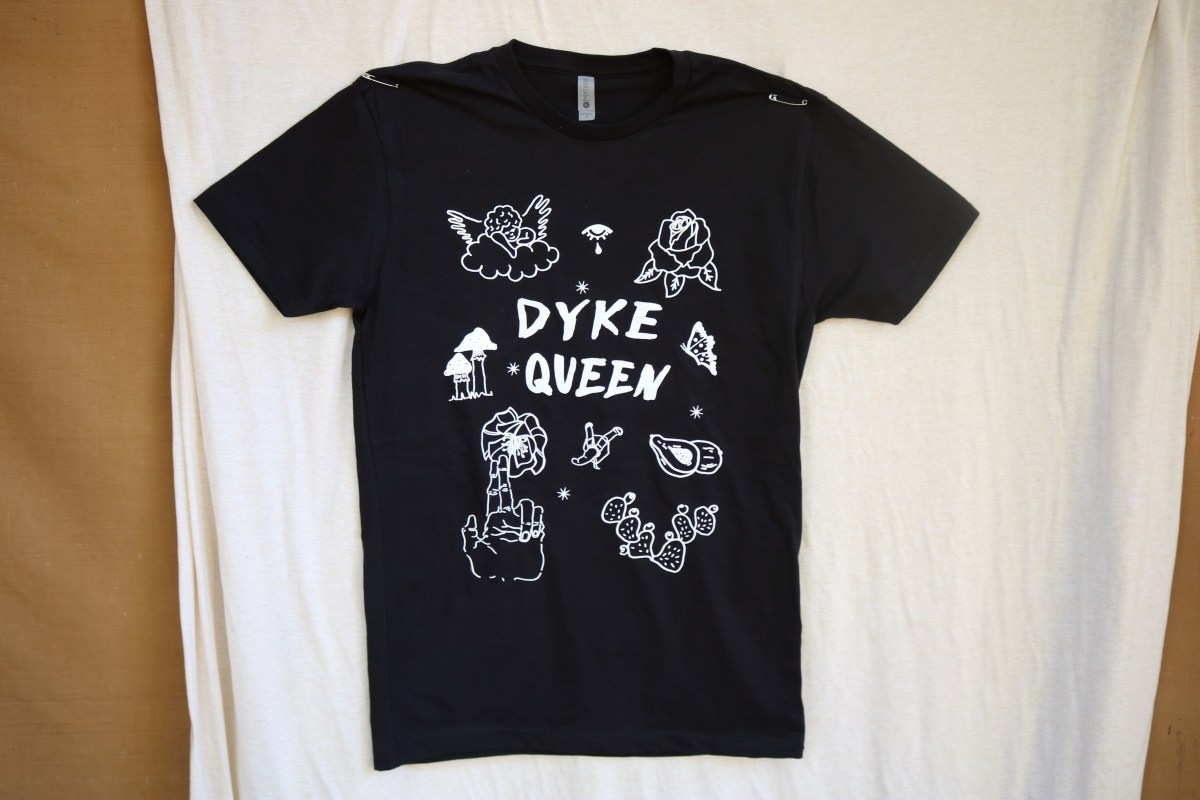 Do you have any favorite pieces in this issue of Dyke Queen? Or pieces that you think will particularly appeal to Autostraddle readers?

I love everything in Recipes from Queerantine! One piece that for sure Autostraddle readers will love is the essay by a writer that may be familiar to you all — Kamala Puligandla, your former Editor-in-Chief. She wrote a beautiful essay about how she fell in love over Zoom during quarantine.

Apart from Kamala’s piece, J Wortham contributed a soothing recipe for a meditation. Alexandra DiPalma, inspired by Frank Ocean, provided a recipe for magic mushroom tea. Koa Beck gives an insider’s look into her personal homemade scone recipe. And Bridget Ore illustrated a comic about what 24 hours during quarantine was like for her. 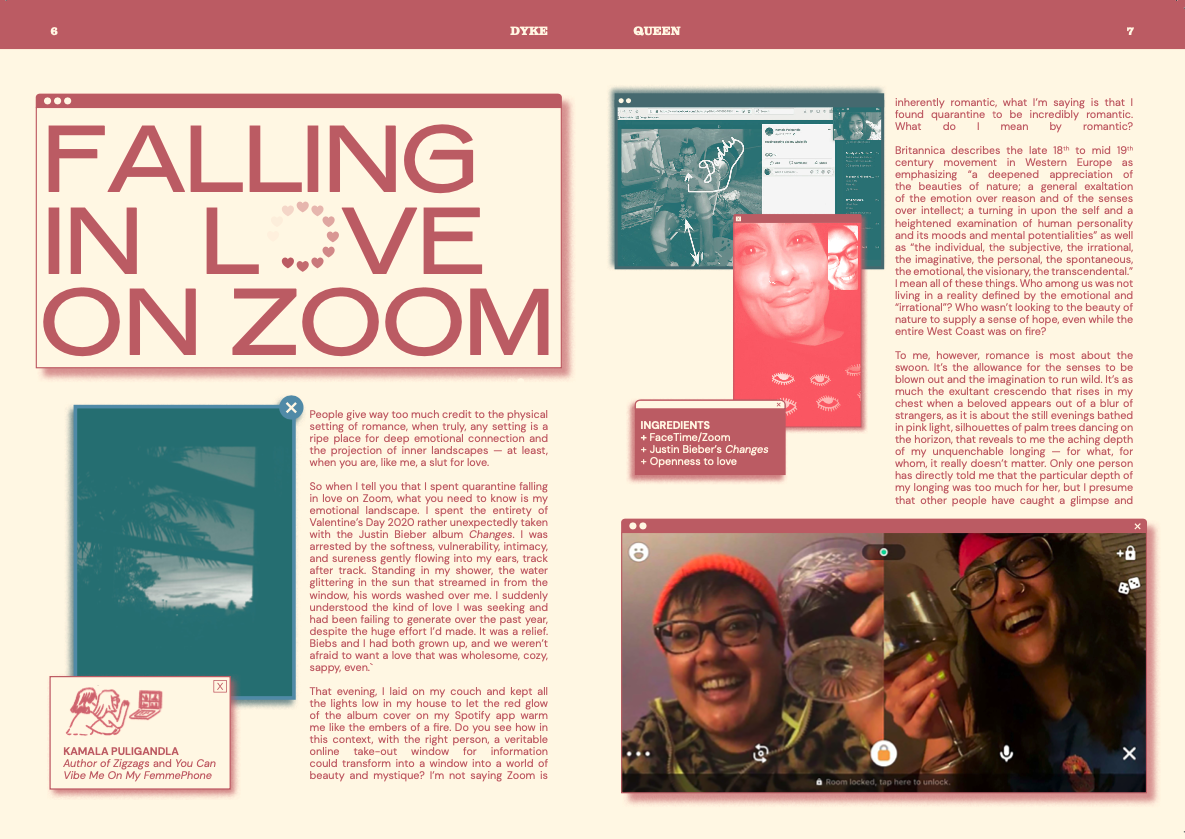 Can you tell us about the cover of this issue?

Yes, OMG, I love our cover. The image is titled “juicy fruit” and it’s by Naima Green. She’s my favorite queer photographer and it’s incredible to have two of her photographs in our issue. Her work graces both the front and back covers.

Naima’s image fits perfectly with the theme of the issue—it’s about finding pleasure and joy and communion with food through ritual. 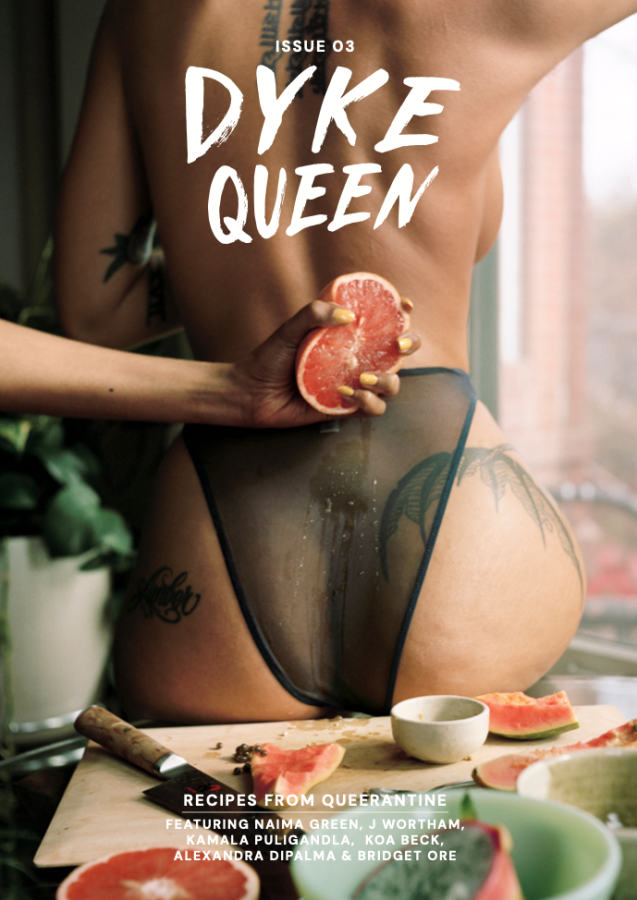 What does the future of Dyke Queen look like?

Well, for now I’m hoping to enjoy the moment. Recipes from Queerantine took two years to complete from start to finish. I’m very excited for it to be out in the world.

I feel an immense amount of gratitude for every single person that contributed to this project, from friends/mentors who gave advice, to our designer, to all our amazing contributors.

As far as future issues of Dyke Queen, I have some exciting ideas. There’s a few more themes that have been running through my head I’d love to explore. That’s TBD for now.

Apart from the new issues, my dream is to turn Dyke Queen into a publisher of queer and trans books. Dyke Queen started as a zine, evolved into a magazine, but at its heart its remained true to the vision of creating a platform for BIPOC queer and trans artists and writers. I’d like to see the project evolve into working to bring book-length projects into the world.

Who is the quintessential Dyke Queen reader?

I think part of why I wanted to start Dyke Queen was because I felt so inspired by LGBTQ historical accounts like @h_e_r_s_t_o_r_y and @lgbt_history.

I’ve always been drawn to queer and lesbian history because I never learned anything about queer history when I was growing up. As an adult, once I came out, I was hungry to learn as much as I could.

The @h_e_r_s_t_o_r_y Instagram account would post all these beautiful vintage photographs from the 80’s and 70’s of queer women at marches or in magazines like On Our Backs (iconic). I loved all the photographs from those era’s and learning about queer historical figures I’d never heard of before. I looked at photos of women from that time and thought that they weren’t that much different from us and that was the beautiful thing that connected us through time. Who were these people? Where are they now?

The thing about following those accounts is that I thought it was amazing to be able to learn about my history for the first time, but I also didn’t want to just look back nostalgically. I wanted to be a part of creating and documenting lesbian/queer culture in the present.

When I started Dyke Queen, I was so inspired by all of my friends. I had never been a part of a queer community that had so many lesbians/queer women in it until I moved to Los Angeles. It truly was a turning point in my life and Dyke Queen in a way was created to honor all those friendships.

So, I guess that’s a long-winded way of saying that it’s for people who are interested in queer culture, art, literature and style. Whoever’s looking to read a smart, sexy, fun and touching magazine—DQ is here for you.