Enraged fanboys across America now have indisputable and unarguable evidence that all those “fake gamer girls” they’ve been complaining about aren’t as fake as they say. Well, more evidence than previous reports saying 45% of gamers are women and the personal accounts of all the women who play and love video games.  A new study shows that not only do women make up a whopping 48% of American gamers overall, but women over the age of 18 make up a higher percentage of gamers than teenage boys, the demographic which is often seen as the face of the game playing industry. 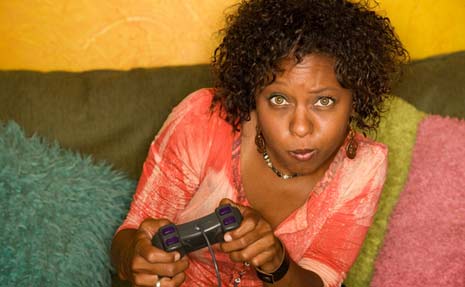 This new survey by the Entertainment Software Association shows that 36% of Americans who play video games are adult women. That compares to only 17% of gamers who are boys age 18 or younger, which is often seen as one of the most desirable demographics in the industry. So, if more than twice as many adult women are playing console and mobile video games than teenage boys, why are women considered to be outsiders in the gaming community? Furthermore, when 48% of all gamers (up from 40% in 2010) are women, why do so many people both in the video game industry and in the gaming community continue to pretend that women only “pretend to play” video games in order to gain some sort of strange Nerd Cred?

The clear answer is sexism and The Patriarchy. Like movies, comics and pretty much everything else that exists under the patriarchy, video game culture is dominated by men, despite huge numbers of women who enjoy those things. And when women say that they like those things out loud, we’re often called fakes or accused of doing it for attention. This fanboy outcry gives credence to video game developers who often argue that they don’t need to make games featuring female protagonists because there just aren’t enough women playing, or that the women who do aren’t “real gamers.” Hopefully this survey will show them just how wrong that is. Not only do women make up 48% of people who play games, but when the survey looked at people who bought games, the split was an even 50/50 between men and women. So obviously it would a smart move to try and market games toward women.
At the same time, we might want to hold back on that hope a little, as numbers have been similarly high for the past several years and that hasn’t changed things much. Last year, a survey by the same group showed that 31% of gamers were adult women compared to 19% teenage boys. The good news is that the disparity is getting even wider, and with any luck, soon it will be so big that video game manufacturers won’t be able to ignore it any more.

This issue reared its head again earlier this year at E3 when the new Assassin’s Creed game announced that it would feature multiplayer gameplay, but no women assassins. The absurdly weak excuse that Ubisoft gave was that “women are too difficult to animate.” However, after a backlash from both fans and many video game animators, many people were left with the impression that Ubisoft simply didn’t care to market the game toward women.
None of this is really new news to us women who play video games. Despite the protests of angry fanboys who say we only play these games for attention and don’t really know anything about video game culture or history, and despite the complete lack of interest in marketing toward women many video game developers continue to show, the number of women who buy and play video games is consistently on the rise. It’s just plain ridiculous (and bad business) to dismiss 48% of your customers and to treat just 17% of them as if they are your only customers. Hopefully this survey is just one more shovelful of dirt on the grave of the entire fake gamer girl concept and we’re one step closer to women finally being taken seriously in the gaming world.