Only a few more portraits now — next week are the last two, and then the series is done for good. It feels like the show was forever ago at this point so it’s strange revealing the portraits now! This series was one of the few things Tayler & I have ever kept truly secret… we like showing our work as we go along but we tried to keep it close to the chest, and now it’s quite difficult to let go. Nevertheless. Here are some of the last ones, our monster friends. I’m very sorry that most of the memories are blurry by now, but I think they are still good portraits. 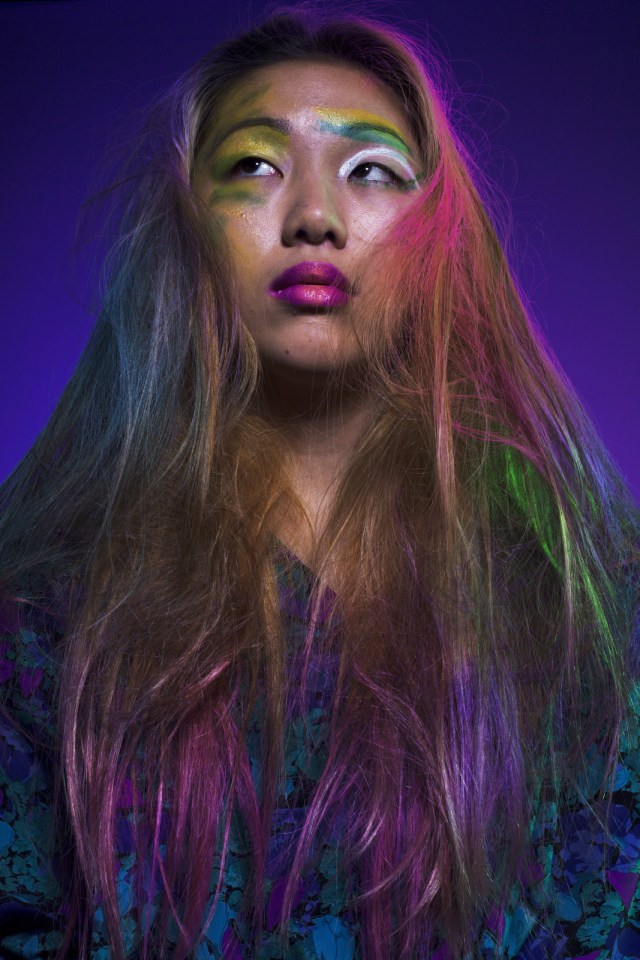 Sean’s one of the oldest readers of my work, I think — not literally old but she’s been reading my work for the longest time. She just graduated from my old high school! Congrats, Sean. Anyway, her monster had to do with taking up space the wrong ways and being afraid of color. So… well, it’s quite obvious, I think. We made her rather majestic with color and played with symmetry and angles. I really had fun spray painting her hair (with hair color spray, I’m not evil…) and making her look like a rainbow. I asked Tayler to take off her shirt and give it to Sean to wear because it matched the background and she whipped it off for the shot. Tayler shot in her bra. It was a nice bra! A bra I recommended she buy! I love lingerie. I’m going off track. Anyway, such is our commitment to our craft. I think her portraits might be one of the more traditionally beautiful ones, more of a grand monster than the rest, we didn’t get too deep, which is a failing of our collaboration. Still — I think it’s very beautiful, and it’s okay to fail, so I’m fine with it. 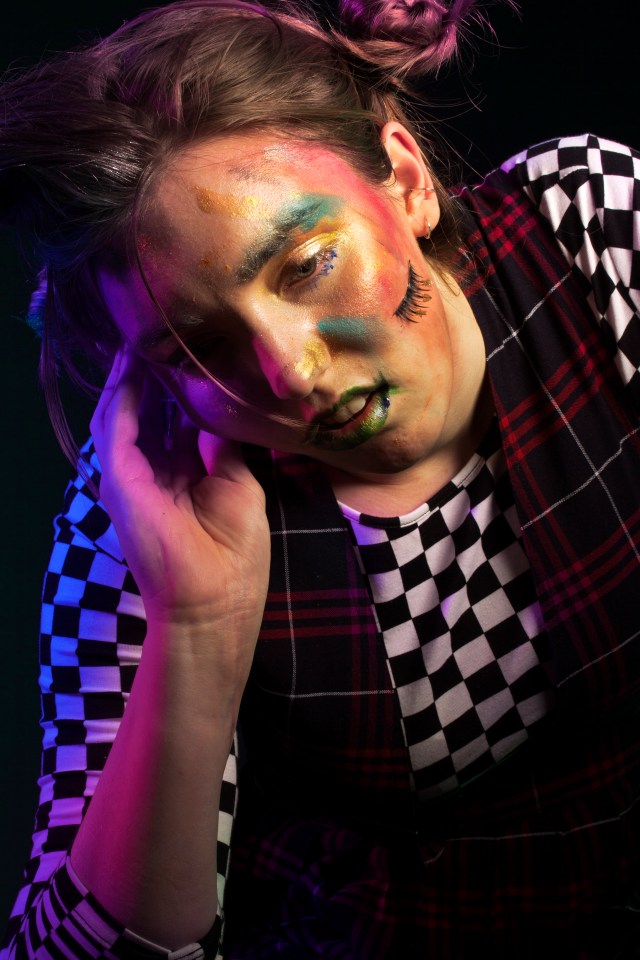 Grace had one of my favorite interviews ever, but it was so long ago I don’t remember much of it. I didn’t want to mess up summarizing the experience, so I asked Grace for her take on what happened. It’s below:

At the time living in New York and going to college was kind of sucking the soul out of my body. I’d had a very clear notion of myself my whole life that got torn apart as I lived on my own, so to replace it, I just lived my life by attempting to imitate other people to try and figure out how to connect again. The MIU shoot was actually just another iteration of that. I remember even getting dressed that day I dressed with the idea of fulfilling some ideal, not for me. The irony going into that day was really strong — even though it wasn’t the “pretty” that we think about when we approach the binaries of “pretty” and “ugly” — I was putting on just as much of an idealized face to attend the shoot itself. I was trying to be some version of me that just didn’t exist yet. There were a couple moments that I remember that brought it to attention really clearly. When Arabelle asked me who my idols were, I was so flustered I just blurted out a string of like, classic tumblr favorite hotties (Lucy Liu and daddy Idris), to my everlasting shame. When I had to get a final outfit on to do the shoot in, I kept trying and trying to see what look Tayler and Arabelle preferred, not really grasping the concept that it was supposed to be all about what I preferred.

In retrospect, it’s clear that the most important ugliness I did have was my imperfect chameleon skin. All of my different forms were eating me up inside, but they defined who I was — nothing. Perhaps that’s a harsh term but I lived with nothing cementing me at my center as I changed faces, never saying no. The questions Arabelle asked emphasized that it was about me, and my experiences with my ugliness, and it made me very aware that I didn’t know how to talk about myself anymore, but I also didn’t want to talk about anything else. Ignoring yourself rots you.

I think Arabelle and Tayler grasped onto that too, because Arabelle talked a lot about how she’d been really inspired that day by Pat Mcgrath’s Galliano looks and by Lisa Eldridge’s Biba tutorials. And that’s more or less what ended up on my face, despite some pieces of input. “It’s too pretty,” you kept saying, “I need to listen to My Chemical Romance, it’s too pretty.” When it came time to shoot the pictures, Arabelle and Tayler wouldn’t let me see the mirror as I sat. “Don’t let her look at herself.” I was lost without the mirror, because even though I thought I was trying to be other things, there was still a self in there — my judgment still guided me and I needed it looking back at me.

In regards to like, that actual questions that you asked to get inspiration, I know I told you a story about how my most embarrassing/first moments with makeup were at a murder mystery party (how fitting) where I got to dress up as a maid at nine years old, and took the chance to put blush all over my face. I wanted to look like a doll, a face with cheekbones. It was before puberty and other bullshit things made my face redder/made me aware of how red my face is. My mom’s friend came in and instantly went “Oh god, someone went overboard!” So you purposely went overboard with the makeup as a response. My red cheeks are the constant roadblock to perfect skin and the perfect contour — so you painted it for fun and not perfection. I also talked about how I got into ’50s dresses when I was twelve and wore them every week until I was about 17, so pinup makeup and hourglass shapes were my prettiest pretty. You had me draw a cateye on as a call out to that.

I also talked a lot about my mom, although I’m not sure that was really reflected anywhere? [Arabelle note: She never saw the final photos – until now, haha.] My mom is the best. She’s Doc Gurley on the internet, of the lost tampon video which I’m method acting in. In real life she put herself through Emory, St. Andrews, and Harvard Medical School while working as a waitress, headed the San Francisco HIV/AID’s office before anti-retrovirals were invented, headed the trans clinic at Tom Waddell in SF, kept herself working while in remission from breast cancer, and is generally incredible. My baby pictures are at SF pride being held by two leather daddies. I heart my mom. Let me talk about my mom. Let’s tell the world about my mom. My mom!!!!

Anyway. From where I stood, MIU was about how your ugliness is important and strength and whatever you want it to be – because it defines you. It seemed like it was a way to say to everyone that who you are, what you are, the worst parts of yourself that you can conjure – they’re powerful. You’re powerful. Don’t ignore yourself. Putting yourself first and living for yourself and your opinions is generally attributed to selfishness, which is seen as negative. But you need that most of the time, to survive, because you can’t please everyone and you have to live with yourself first. My ugly was neglecting my own desires. I realized I’d been rotting before.