Malinda Lo‘s Ash was the first queer book I ever held in my hands. Oh, I’d skulked past the LGBT section at the Barnes and Noble in my little town in rural Georgia more times than I could count, but I’d never had the courage to pluck something gay off the shelf and take it to the front of the store and pay for it. Ash was a different story. I had the striking good fortune to begin my career working for Malinda Lo. She was my editor. She was the first lesbian I knew to join the Television Critics Association (one time she even interviewed Lena Headey in a photobooth!). She wrote about TV and she wrote about love. Malinda Lo was a hero to me and I was going to buy her book. And I did. And I read it in one sitting. And I have since read everything she’s ever written in one sitting.

You might also know Malinda Lo from her queer Cinderella retelling. Or from her queer fantasy novel, Huntress. You might know Malinda from her creepy-as-heck (yet shockingly swoony) queer sci-fi duology, Adaptation and Inheritance. Or maybe you know her from her work in the brilliant serialized fiction, Tremontaine (where chocolate is chocolate but chocolate is also sex and power and deft commentary on cultural appropriation and imperialism). Whichever way you know her, you’re about to learn her all over again because Malinda Lo is releasing a brand new book in a whole other genre. It’s called A Line in the Dark, and here’s what Penguin’s PR department has to say about it:

Jessica Wong is the kind of girl nobody notices. She’s also the kind of girl who sees everything. There’s no one better at overlooking Jess than her best friend Angie. Jess can live without Angie knowing her real feelings, just so long as they’re best friends. But when Angie meets Margot, Jess recognizes that things will never be the same. Worse still, Margot is one of the rare people who sees exactly how Jess feels about Angie. As Angie falls hard for Margot and gets caught up with Margot’s wealthy friends, Jess’s life begins to fall apart. If she isn’t Angie’s best friend, what is she? Then, at a party, surrounded by Margo’s friends, Jess finally breaks down and starts revealing a few of the secrets she knows. Not everyone in the party can handle what Jess reveals, and before the sun rises, someone’s dead.

Dark, disturbing, and full of twists, A Line in the Dark is cleverly crafted YA mystery that will delight readers craving a queer teenage girl anti-hero just as morally complicated as her male counterparts.

Oh, hey and here’s the cover, which Malinda and Penguin are allowing Autostraddle dot com to exclusively reveal! 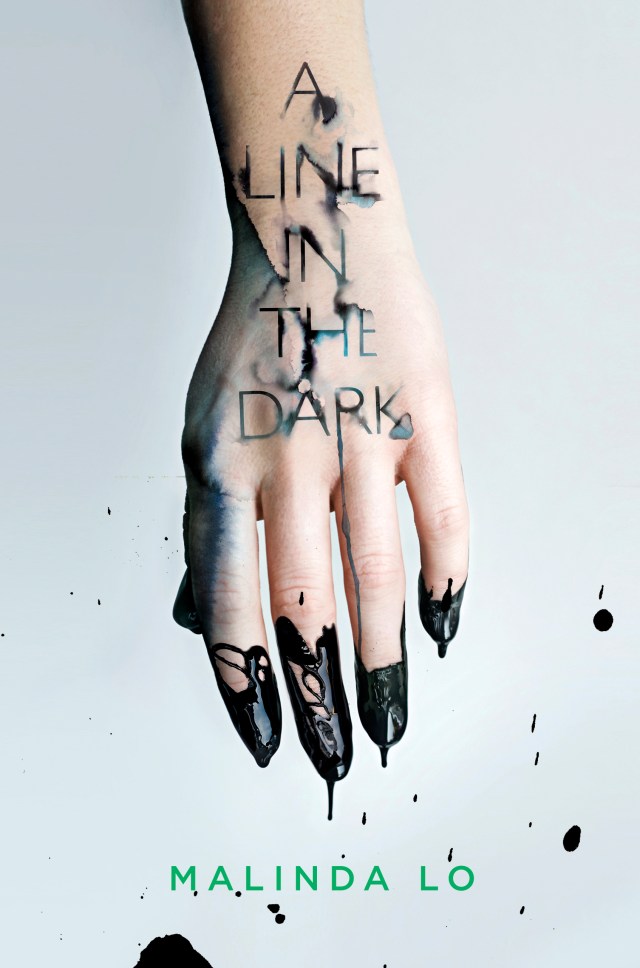 Malinda was also kind enough to answer some questions about her upcoming YA novel, the evolving world of LGBTQ fiction, and the responsibility of storytellers in Trump’s America.

I’ve written heroes before, most obviously in Huntress, but it’s not a natural thing for me. I’m much more drawn to writing characters who are, if not anti-heroes, at least not conventionally heroic. All of my characters (with the possible exception of Kaede in Huntress) have dark qualities to them, or aspects that can be alienating to some readers. I find those characteristics to be the most interesting to write.

With A Line in the Dark, I initially set out to write a likable main character who does some questionable things. (Not sure if I succeeded in that likable area!) I don’t know if that makes her an anti-hero; to me she is a specific person who made specific choices. I know that in the past (and sadly sometimes now), lesbians have been written stereotypically as predatory and villainous. Those stereotypes are decidedly harmful, but I believe it’s important to reject them not by writing solely morally pure and good queer characters in response, but by showing queer characters in all their human complexity.

You’ve written so many wonderful books in so many different genres. Now a twisty mystery! Which genre have you been most comfortable writing in, and which ones that you haven’t conquered yet intrigue you?

Thank you! I really do enjoy writing in different genres. I like to explore the challenges and expectations that each genre presents and figure out how to work with and around them. It’s kind of like retelling a fairy tale; you have limitations in each genre, and the challenge is interpreting those limitations in a unique and personal way.

I think the most comfortable writing voice for me is dark fantasy or gothic suspense. You’ll find that voice in some parts of Ash and Huntress, as well as some of my short stories. I was never a goth in high school — I was probably more goth-adjacent — but I love a spooky story, and many of my favorite books are in these categories. Daphne du Maurier, for example, and the darker Victorian voice of Sarah Waters’s Affinity. I have a book I’ve been planning to write for more than a decade that is all this voice. Parts of A Line in the Dark feel a bit gothic to me, too.

How has LGBTQ YA lit changed since you first published Ash in 2009? How do you hope the industry continues to grow?

There are so many more LGBTQ YA books now! It’s wonderful that this little subgroup of YA fiction has expanded so much. I have been disappointed that it’s taken a long time for more fantasy and science fiction featuring queer girls (not written by me!) to be published. There’s definitely room for more genre fiction with LGBTQ characters, and I’m glad that those numbers are finally rising.

I also want more LGBTQ characters in historical fiction, because we have existed throughout history even if we haven’t always called ourselves “lesbian” or “gay.” There are countless stories about us that haven’t yet been told, set in the here and now, in the far-off past, in outer space, or in fairytale fantasy lands. I want queer characters in all those worlds.

As a lesbian woman of color, do you feel an even greater pressure as a storyteller in the shifting political climate of the United States?

I don’t feel pressure as a storyteller due to my identity. I see others attempting to put that pressure on me all the time. It’s in the questions I’m asked on twitter and at workshops; it’s in the categories my books are placed in — “LGBTQ books for Pride month” rather than “fantasy novels about kickass girls.” However, my parents raised me to be a remarkably stubborn person who rejects any sort of limiting expectations from anyone. This trait is one that my parents absolutely hated because it made me a horrible teenager who always talked back. However, my stubbornness has its benefits because it means that when I see that kind of pressure coming, I flatly reject it. I write my books for me.

The person I am was completely devastated by the election. I couldn’t work for weeks afterward, and I’ve had to moderate my news consumption because it was destroying my ability to be creative. The person I am needs stories that push back against the hateful, authoritarian tendencies of the current administration. And because I am who I am, the stories that I want to tell now are definitely different than the ones I wanted to tell before the election. It’s not about pressure; it’s about understanding what I need as a writer and an artist.

This means the next project I hope to write is completely different than what I thought I’d be doing three months ago. It hadn’t even occurred to me before the election. That’s the one good thing that came out of the election for me: a totally new idea that feels like it’s 100% right for me.

Thank you so much! I am so proud of that scene in Adaptation, really! Hee! A Line in the Dark, I have to warn you, is a very different book and there isn’t really space for that kind of kissing. There is, um, stuff there, but it’s appropriate for the tone of the book. But don’t worry: there will be more kissing later. In other books.

What excites you most about A Line in the Dark?

The fact that it’s being published! There was a time in the last few years when things were looking pretty grim for me regarding my writing career. I wrote a book that I couldn’t sell. This isn’t unusual; it happens to a lot of people. It was really hard for me because it was a book that meant a lot to me, and I still harbor hopes for it. However, during this process I met my current editor, Andrew Karre, and over the phone with him, the idea for A Line in the Dark was born. If not for Andrew, this book would never have entered my imagination. It came out of a dark time in my life, and the fact that it’s going to be a real book feels a little like a miracle.

A Line in the Dark will hit stores, Kindles, and my own personal bookshelf on October 17.