Everything is, I guess, a video game. That’s as far as I have gotten into writing this without having to stop and go back and play a little bit more a few times to figure out whether that’s even true, and the answer hasn’t really become any clearer with time. The game, if it even is a game, would probably want me to tell you that whether it is a game or not, it is still a game, and is also not a game. But let’s just call it a game, because I am not a philosopher, I am a person who plays games.

So. Everything is a game. As the game begins, I am a something. A star or a cell or a speck of dust, I’m not really sure. And I’m okay with that because I figure if I really were any of those things I wouldn’t probably know what I was anyway. And I’m only a something for a minute or so because then I’m a sheep. 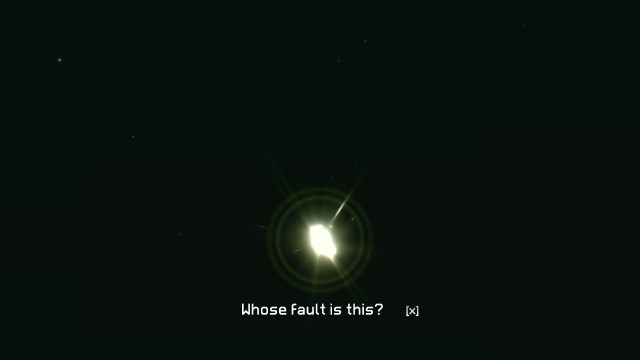 You are asking the wrong something, something.

One of the tags on this game in Steam is “simulation.” I’m not sure what exactly it is simulating that makes sheep and, in fact, all larger mammals roll across the scenery like Pass The Pigs, but that’s the world we’re in I guess. So I’m a rolling sheep, and then I learn to sing, which believe it or not sounds like “Bahhhhh.” And then I meet some other sheep and we become a rolling singing flock of sheep, and then the game tells me how to let them go and then I am one sheep again and it’s a little sad, but then the game is like “Hey buddy, aren’t you a little tired of being a sheep?” And I’m like “Man I don’t know. Maybe.” And the game says “Why don’t you try… descending.” 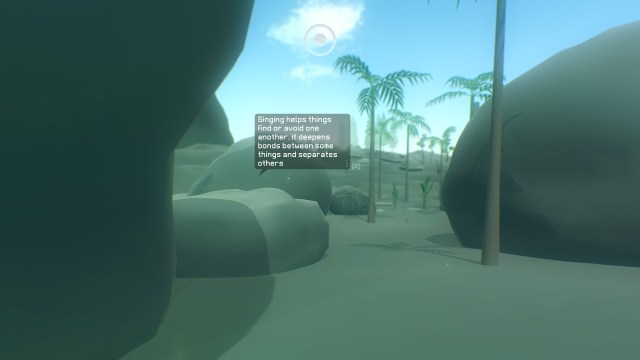 True. Yesterday a man’s singing helped me avoid him at the bus stop.

There’s a decent chance that, after reading that paragraph, you don’t really have any idea what’s supposed to be happening in this game, but if that is the case you can rest assured that we are just about on the same page. The gameplay is: being a thing, making the sounds of the thing you are, meeting other things like you, dancing and producing more things like you, then becoming something else. That’s all there is. But there is some magic to it you won’t really see unless you just lean into it for a while and let it tell its story. 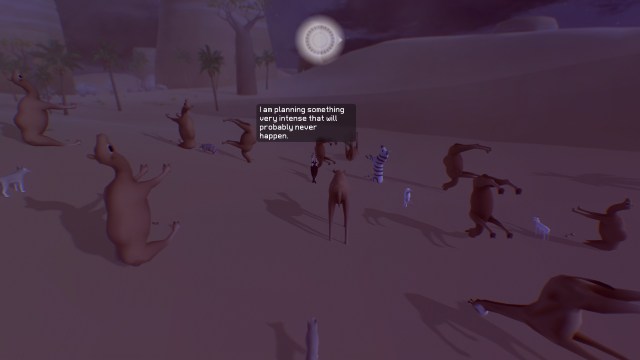 Me too, and it is usually fanfiction.

After being a sheep, I followed directions and “descended” and became grass. And in doing so, suddenly I was in a different world, which was the same world, but now I was looking at it from the perspective of smaller things. As a sheep, the landscape was smooth and rolling and populated by animals and trees. As grass, the world became more crowded. There were flowers and bugs and frogs and acorns and also a book and a candle and a coin. Bugs and frogs don’t roll, they skitter and wiggle and feel a lot more like alive, but what they had in common with the big things was that all of them had thoughts they wanted me to know, which were mostly existential crises and or complaints about how hot the sun was that day. I took a turn being all of the things I could see and finding out how all of the little things sing and dance, and then I tried to become a butterfly but I accidentally descended again and became pollen, and from there, Oxygen, and smaller and smaller until I was galaxies inside of everything and I had somehow descended so far I had become the entire universe.

At that point the game told me to go back and to find where I came from, so I ascended and ascended and eventually I made it back to pollen and back to grass and back to sheep, but by then the world was covered with snow and all of the things in the world were thinking about winter. And then I ascended to trees and boulders and landforms and continents and planets and the sun, and then I came back again and there were huts now, and firepits, and graves. And then I tried being those and tried being other things and when I came back there were houses now, and castles, and boats.

And there is something to that, to the time passing on you when you weren’t really expecting it. And every place you’re at feels so limited but when you go down a level there’s so much more, and then it changes and there’s more still and you have to wonder which things came and went while you were busy being Saturn and now you maybe won’t have a chance to be them ever at all. 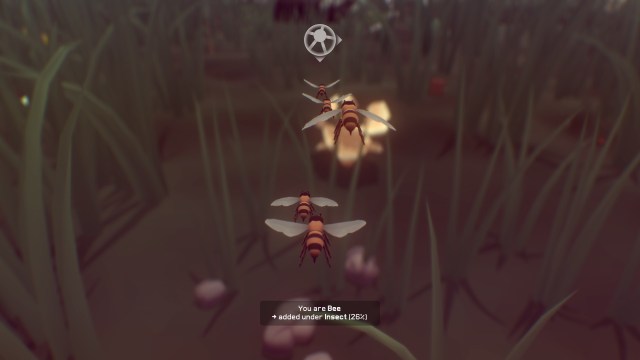 It feels a little like Katamari Damacy sometimes, with the way it plays with scale and especially when you amass an enormous herd of mammals to roll across the plains singing all of their animal noises. It really is a little silly. But then instead of the King interrupting you to call you a failure, every now and then you see something with a different icon over its head or whatever the equivalent of a head is for the many many things that don’t have heads, and when you click on it, you get an audio clip of philosopher Alan Watts telling you about what things are and what they are not and how they relate to each other and probably a lot more stuff but after a while I stopped listening. I didn’t stop clicking on them though. His voice is nice, and after a while it blends into the sounds of the world and it kind of feels like when a song you like has an audio clip in it for whatever reason and it’s a little invasive because you wish they would just play the song, but it’s also a part of the song so you love it anyway at least a little bit. He’s kind of a lullaby.

This is a tough game to even have an opinion on. I can’t say I loved it, but it was pretty compelling in a way, and I know for sure that it will be exactly the perfect game for somebody out there who isn’t me. It’s a completionist’s dream (or nightmare) because it tells you what percentage of every kind of thing you’ve been every time you be a new thing, and there are a LOT of things to be. And it’s relaxing maybe, like those farming or fish tank sims I never play because I get bored and everything dies. It costs $15, which might be the perfect price or might be too expensive or might be a bargain, but again I really don’t know. My guess is that it’s too much, if only because I have no idea who will enjoy this and who will hate it, or who will find it relaxing and who will find it anxiety inducing. I think I found it both of those things, and I’m pretty okay with the price even if I have no idea what I paid for or what just happened to me. But maybe that just means that the game is indeed very relaxing because I have lost the will to worry. 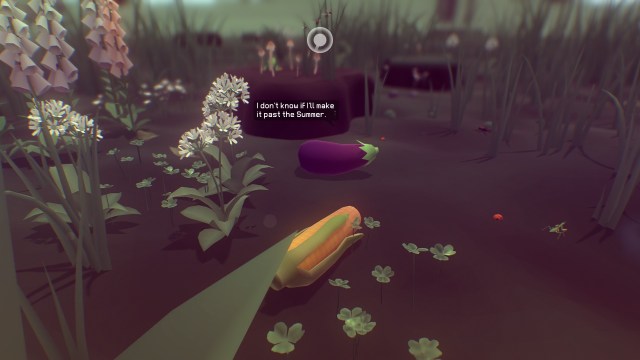 This existential eggplant about sums it up.

I played Everything on a Windows PC, but it’s also available for Mac and Linux, and on Ps4. Xbox users are again out of luck on this one I’m afraid. I’m actually kind of tempted to buy it again on Ps4 because it might be really cool to see it all huge on my TV. But that would be fiscally irresponsible and I have too many games I’ve never played before to go around buying games I only sort of liked twice.

I’m saying though, SOMEBODY is going to absolutely love this game, and they won’t be wrong. They will just be not me. Which is maybe the same as being me, which is something I might know if I had paid more attention to Alan Watts.