For those of us over a certain age, 90s nostalgia is hitting right now. Remember when it cost a few cents to send a text? When the Internet seemed so full of potential to positively transform society? When we were gracefully shielded from the truth because presidents didn’t have a tool to constantly let us all know their terrible inner thoughts, and we didn’t have a literally unlimited number of perfect-looking “regular” people with amazing lives to compare ourselves against?

Shelli started it, by posting a picture in our Slack of a laptop logged into 1997chat – a simple web service that allows you to relive the 90s by utilizing a clunky, basic instant messenger client that looks a lot like AIM, which everyone born between 1980 and 1995 (and surely lots of other folks as well) was using every single night. I asked out my first girlfriend over AIM! A lot of breakups also happened over AIM. Likely a lot of “cyber” sex, too. But mostly just good old wholesome chatting with friends!

Curious what your friendly Autostraddle writers and editors’ screen names were? Let’s surf the Information Superhighway back down memory lane!

Shelli Nicole:
I downloaded this and It feels right 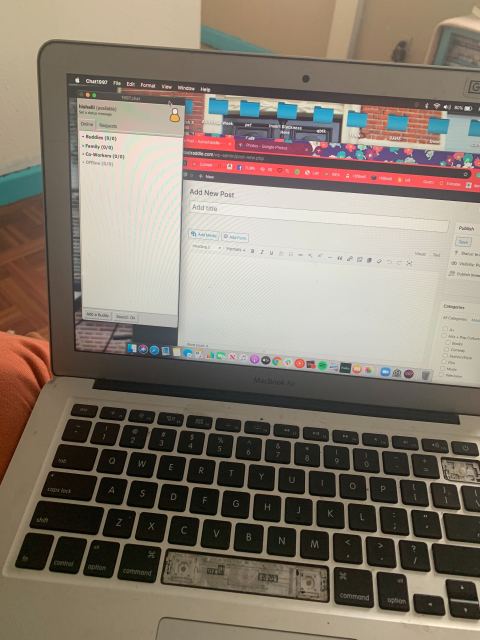 Drew Gregory:
Oo I am definitely going to join you
I just need to think of a screen name
I could keep SprtsFreek1224 from my elementary school days but I’m not trying to prove as much now

Shelli Nicole:
Wow I literally have aim up while writing an article as an out queer girl in my own apartment. My 14 year old self is so happy
Oh my original was seashellz59 :)

Archie:
Going back to my Age/sex/location roots

Christina Tucker:
Mine was… SwexyLlama77 for a while

valerie:
I had some… really embarrassing ones. My very first one, my mom made up for me, because I was in like 5th grade… it was AceReader. Though to be honest once I started choosing them on my own they weren’t much better. We had the very original ButterflyGirl713 and BroadwayGirl713 (worth noting here that my birthday is not, as these would suggest, July 13th), SportyAlien3 (Sporty Aliens 1 and 2 were my friends Lisa and Kasey. We were very into Sporty Spice and, well, aliens.)

Abeni:
mine was DratiniJ for a while, which is a pokemon
and then i had a lot with underscores and x’s in it. like xx_somber_mood_xx kinda stuff lol. i’m glad i don’t remember those ones verbatim

Malic White:
My screen name was horses4eva90, so I am required by law to be gay now.

Heather:
My AOL screenname was GeorgiaMntnBiker, which sums up several things about my personality that are still true to this day: I am very Southern, riding a bike is my favorite activity, and I have never been capable or interested in being coy. Whatcha see is whatcha get! 🚲

Kayla Kumari:
My AIM screenname was lovexpeacexunity and I have NO COMMENT

riese:
my first AIM Screen name was PopTartGod, because I loved pop tarts more than anything in the world

sarah:
i was pinkskittle619 on AIM and then switched to mIzZgUrLiEgUrL when we got AOL

Jehan:
I’m here to sheepishly report that my screen name was urbanbeauty13. I can’t even explain how much this choice makes me physically uncomfortable to this day 🤦🏾‍♀️

Kamala:
umm, mine was GRIF105 which was a baseball reference to Ken Griffey Jr. who I guess saw as like daddy inspiration, and this radio station in the bay area called Live105 which was where I listened to Nirvana, Bush, The Counting Crows, Weezer, Everclear and all my favorite bands. I was in a masc phase in 5th grade?

kaelyn:
I was Magenta512, for the character I most identified with from the Rocky Horror Picture Show (which yes, I’ve already unpacked exhaustively), Magenta. I also had a Sim named Magenta Curry around this time in my life.

Drew Gregory:
I just made my away message Fiona Apple lyrics and it was pure serotonin
I hope my sister doesn’t message Kori Denning on my account while I’m in the shower like she did when I was in 5th grade

rachel:
just thinking about hearing the door creaking sound effect has leveled me

What was your screen name? Your buddy icon? Did you use glitter girls or BRATZ in your “profile?” How do you feel about it now? Are you gonna exit out of those group chats, log off of Twitter, and jump on the 1997 train to go back to the simpler times of AIM like we are, apparently, doing right now?