The zine Every/Body (subtitled “An Open Discussion of Gender + Body”) combines the work of 41 talented writers and artists into one book that covers a wide range of body and gender issues in an equally varied showcase of different art styles. Most of the entries are in the form of short comics, but there are a few that are entirely or mostly text and some that are just art. Since everyone has a different body and there are so many different ways to present and feel about your gender, it’s great that this book has so many different people and perspectives contributing to it. Throughout the zine there are themes of body positivity and acceptance. Even in many of the stories that are about the author’s negative body feelings, they often end with moments of affirmation or confidence. It’s because of this combination of variety and positivity that the zine really succeeds in telling a complete story, one that is about how, no matter what society tells us we should think about our bodies, we can still learn to take control of them, make them our own and love them. While not every single body type or gender is covered, this is still a great discussion about a lot of the different things that many of us like and dislike about our bodies and the different ways we deal with that. 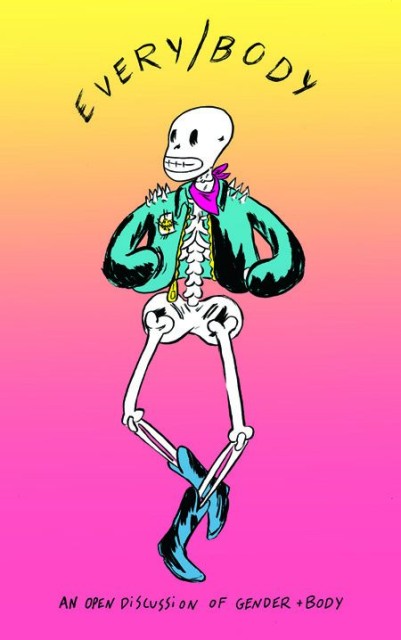 Some of the comics talk about the different ways we dress up and present and explore our gender in that way. Noah J.’s comic “Initiation into Mysteries” is a story about how awkward it can be growing up with gender confusion, especially in a society that doesn’t offer much help or support for those who don’t fit into the strict gender binary. It shows the author growing up and wanting to challenge gender norms, but finding no help no matter where they look. However, it has a really cute ending that involves finding someone who supports you and helps you to present your gender the way you want and need to. “Oh, Fuck It!” by Marissa Luna addresses how we often explore gender presentation through the clothes we wear. At first, she says that she was ashamed to be picky about the way she wanted to look and dress. She takes us on a journey through the different types of outfits she’s worn over the years trying to find the perfect balance between femme and and androgyny. Eventually, she’s come to realize that it’s her body and her clothes and she can dress however she wants. As she says at the end of the comic, “I like how I look, and no one should feel guilty about that!”

Other comics are more about our bodies and how we’re taught to never be happy with them, no matter how they look. In “Valkyries Allemandes,” Nina Kiel recounts how her mother and two of her friends recall with pride the time they were called “huge and fat” by being compared to the legendary valkyries of Wagner’s Ring Cycle. Instead of letting this ruin their trip, they became even more confident after they were told that they were similar to epic warriors who could intimidate with just their looks. Kiel returns later in the zine with her comic “Walking Stick,” about all the comments the author constantly hears about how skinny she is and how people think she’s unhealthy or needs to eat more. So no matter if she’s skinny or her mother was fat, they still can’t please anyone. Anna Bongiovanni’s (one of our Saturday Morning Cartoon artists) untitled comic takes us through a journey of self-hate, disillusionment, and body dysphoria. She talks about how she didn’t even recognize her body as her own and she lost control of it, just dressing and acting in the ways society told her to. This text-heavy entry with the occasional scribbly sketch, so it allows us a more detailed look into the thought process of the author. This is a somewhat dark, but touching story that doesn’t end as happily as some of the others, but it still gives the reader hope. 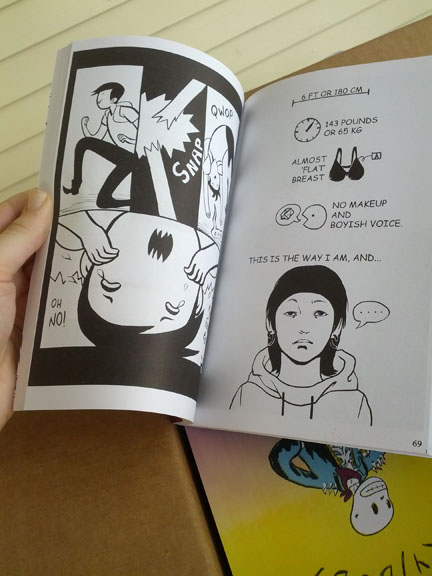 from Not Being Average by Jacklyn Hy Kim

Other parts of the zine take a more direct approach to dealing with the way society tells us to hate our bodies and perform our gender. In “Not Being Average” by Jacklyn Hy Kim, she talks about being a six foot tall, flat-chested woman who doesn’t wear makeup and has a “boyish” voice. Even though she is constantly told that she’s too tall, that she needs to start wearing makeup, and that she’ll never find a man who likes the way she looks, she defends the way she looks. She’s proud to be “unusual” and is happy to have the experience of not being average. She writes about how when people give her this unsolicited and unhelpful advice, she doesn’t let it get to her and instead says that they must actually be jealous of her for being someone who is unique. Maya Kern (who was previously featured in Drawn to Comics) includes a written entry titled “I Think the Key to Loving Yourself is to Grow Up.” It’s about how often we make things personal, how we think that all comments about someone being fat are about us, how we think that every time someone is laughing, they are laughing at how we look. She says that we need to realize that the world does not revolve around us. Nor does it revolve around anyone else, even the people we are supposed to look at as role models. Once we realize that it doesn’t really matter what other people think about the way we look (also once we realize that most other people don’t really think about the way we look), we will realize that it’s a lot easier to be happy than we thought. 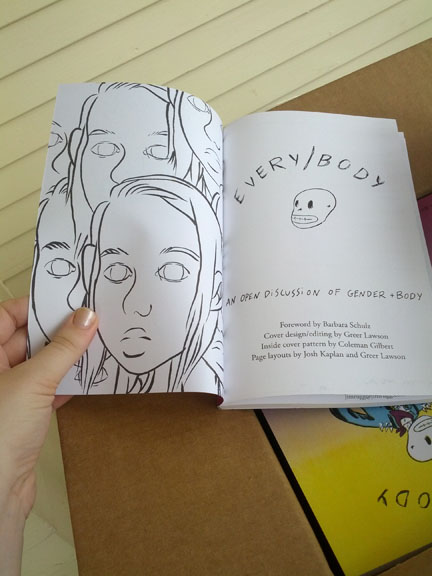 This collection includes many other great comics, pieces of art and stories including Annie Mok’s “Body Language,” which I covered before in Drawn to Comics as a part of Mok’s book Screentests. Other comics cover things ranging from having an inverted nipple and being afraid that no one would find you attractive because of it, to self harm, to being a “girly girl” or a tomboy, to having moles and muscles, to wanting to wear more dresses and feel comfortable in them. While there is a wide range of diversity in the stories told, it would have been nice to see some more stories from people of color that addressed how race and ethnicity affect the way we feel about our bodies and gender. Since this is a zine about bodies, it includes some nsfw stuff, including many drawings of naked bodies and bodily functions. Some entries might also be disturbing for certain readers depending on what kind of body issues they have dealt with in their own personal lives. You can buy copies of this collection at Solomon Fletcher’s (the zine’s editor) storenvy shop.