Imagine if your city just announced a new publicly funded preschool where children are referred to exclusively by gender-neutral pronouns and addressed as “friends” rather than boys or girls. The school has filled its bookshelves with stories of LGBTQ families, single mothers, and adopted children and doesn’t teach traditional fairy tales like Snow White or Cinderella because they promote restrictive gender stereotypes.

No, this isn’t a scene from Michele Bachmann’s worst nightmare. Welcome to the Egalia school, open to children ages 1 to 6, in Stockholm, Sweden. While Sweden has always ranked near the top worldwide for gender equality, the staff at Egalia aims to further eradicate sexism starting with the youngest members of Swedish society.

Jenny Johnsson, a teacher at Egalia, explains why the school decided to provide a gender-neutral environment: “Society expects girls to be girly, nice and pretty and boys to be manly, rough and outgoing. Egalia gives them a fantastic opportunity to be whoever they want to be.” The school’s director, Lotta Rajalin, adds that “This is about democracy. About human equality.”

Egalia, which means “equality” in Swedish, places an emphasis on educating children about non-heteronormative families, with LGBTQ themes at the core of its curriculum. The students have freedom to choose which toys to play with, and the legos are intentionally placed right next to the kitchen playset.

My first reaction to this story was “Awesome! If only I had been able to grow up in that kind of environment!” As a trans woman, it certainly would’ve made it easier for me to accept my gender identity at such a young age.  But even as a preschooler, I knew that I was a girl. So, I’m not sure if a completely gender-neutral environment is necessarily healthy either. While enforced gender roles are oppressive, gender is still a very important part of most people’s identities. I don’t think the solution to patriarchy is to completely ignore gender.  Maybe there is some sort of middle ground where the children at the school are able to self-identify their gender if they choose to? 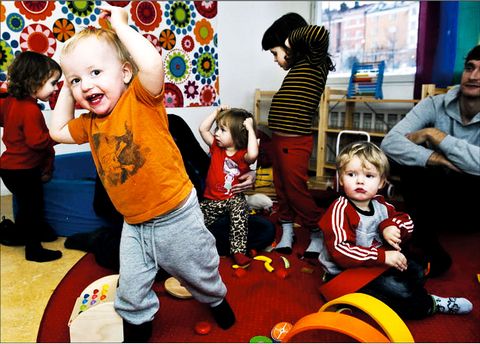 They seem pretty happy to me

What I found most amusing was the near-universal knee-jerk reaction of the media coverage of this story. Rolling Stone featured it in their Daily Threat Assessment section and called the school “radical” and “surely misguided.” A Chicago Tribune writer joked that “the entire nation will probably become extinct in two generations.” And Jay Belsky, a child psychologist at UC Davis, warned that “gender neutrality at its worst is emasculating maleness” because “the kind of things that boys like to do — run around and turn sticks into swords — will soon be disapproved of.”

Really guys? A preschool that doesn’t assume that all boys enjoy stick fighting is too radical to even comprehend? One thing’s for sure- if I wanted kids, I’d rather send them to Egalia than your average American public school, where more than 90% of queer students report hearing homophobic slurs on a regular basis. And judging by Egalia’s long waiting list, a lot of Swedes agree with me. What do you think?