It’s a well-known fact that making presents for people makes the world a better place. Not only are you taking time to create the perfect gift for your mom, brother, or girlfriend, you’re making sure there’s one fewer person at the mall and lessening the chance that someone will get trampled to death by the shopping masses. If you’ve got a little extra time and want to use your very own hands to show someone you love them, this is just the miniseries for you.

I saw this tiny child on the Internet one day and nearly died. How cute are they? I decided that my two-year-old cousin definitely needs a shirt like this so that she can pretend to play the guitar like her mom and dad. Love this sweatshirt but missing a baby in your life? Don’t worry, you can make it for anyone from 0 to 1,000 years old. 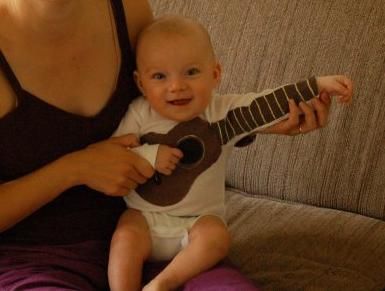 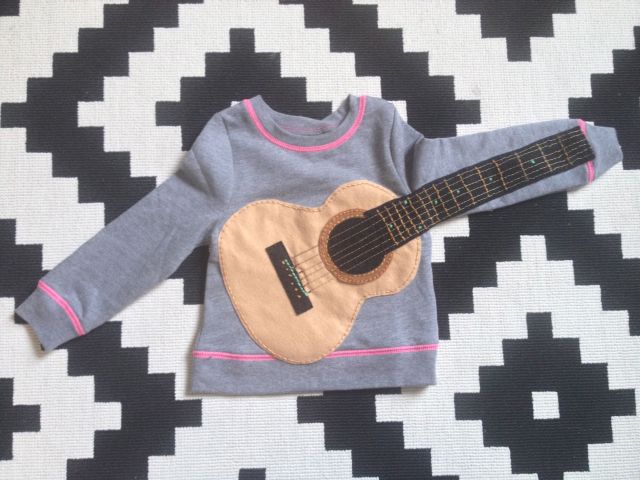 An iron
A needle
Scissors
A ruler
A sewing machine, maybe

1. First make the pattern. Fold a piece of paper in half and draw a half-guitar shape along the fold. It’s like making a paper heart except instead you’re making a guitar! Find some cups or other round things in your house that are the right size for your guitar. Trace around them and cut them out. Now all you need is the neck and the bridge. They’re really easy because they’re just rectangles.

2. Cut out felt in the corresponding colors and a piece of fusible interfacing, if you’re using it, for each piece of felt.

3. Stay by attaching the sound hole and bridge to the guitar body. A word to the wise, though: after you squeeze the glue onto each piece of felt, smear it around with a paintbrush or your fingers so that you don’t have gluey patches that are too hard to sew through. It’s fine if it’s not supersticky. We’re just using this so that we can avoid the porcupinefest that is sewing with 30 pins.

4. Stitch around the outside of each piece. You can use blanket stitch, backstitch, or running stitch. I used backstitch.

5. If you’re using puffy paint, paint the frets and strings using a ruler as a guide, then the position markers and the bridge pegs. If you’re using embroidery floss, mark the frets and strings and use backstitch to sew them on. I used a sewing machine to sew on the strings because I wanted the strings to be thinner than the frets. Sew little knots or stars or attach sequins for the position markers and bridge pegs. 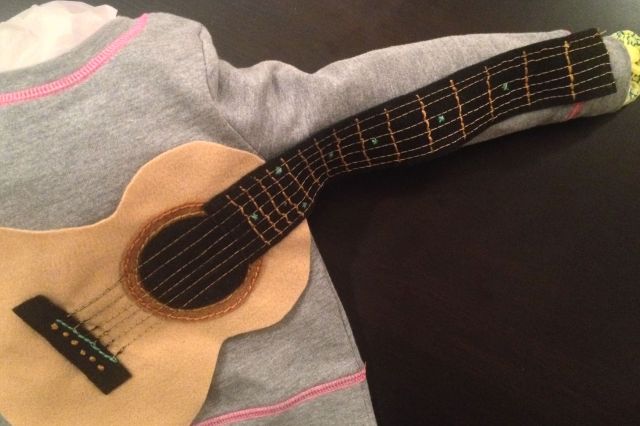 6. Glue guitar body to your sweatshirt. If you’re making this sweatshirt for a little person, keep in mind that kids’ clothes are weirdly made. You’ll want to stuff the sweatshirt with plastic bags so you can see what it’ll look like with a baybay in it. Sew around the outside of the guitar. Now do the same thing with the neck. Now you’re done!

See something you want to learn to make? Send me a picture to laura [at] autostraddle [dot] com and I’ll see what I can come up with!