Welcome to For Your Consideration, a series about things we love and love to do — and we’d like to give you permission to embrace your authentic self and love them too.

There is something about eating seafood that turns me into a lawless creature. I eat seafood with my hands like it’s a competitive sport. Fried, grilled, barely seared, bathed in lemon and butter and served with chilled wine, I love seafood all ways — but the simpler, the better.

Tearing off the heads of crawfish and tipping back my head to suck out their insides. Cracking spindly crab legs to pull out their meat and plunge it into butter. Throwing back oysters swimming in their own salty brine. Stabbing at raw littlenecks to pull them out of their shells. Ripping into a grilled whole fish with my hands, pulling at the flesh eagerly but also with care, so I don’t pull out too many bones. I eat seafood with a certain desperation and hunger that takes over my body. It’s grotesque and erotic all at once. If you’ve ever witnessed it, I’m sorry… but also.. .you’re welcome?

Over the past four years, I fell in love, traveled many places, had my heart broken, unraveled. I also ate a lot of seafood platters. Here are some of them. 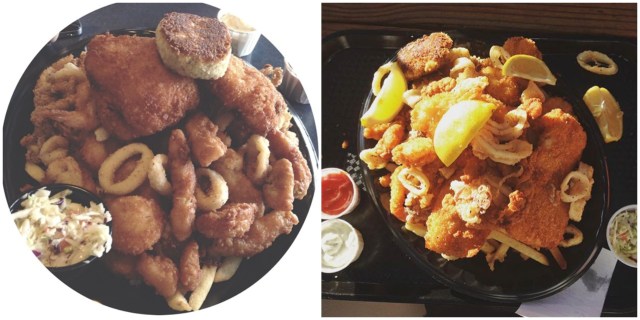 Yes, this is the beachside Malibu restaurant of The Fast And The Furious fame. It is also where Jax Taylor proposes to Brittany Cartwright during season seven of the truly deranged, glorious reality television show Vanderpump Rules. I hate to give any props to a hetero couple, but I honestly can’t imagine a more romantic setting than a FRIED SEAFOOD SHACK. I am being very serious, as I always am when it comes to seafood.

The first time I went to Neptune’s Net and ate this seafood platter, I had a boyfriend. I knew I was gay but hadn’t really parsed any of it out yet. The second time was Valentine’s Day (seafood! is! romance!), and I had a girlfriend, and my family didn’t know yet but they would soon. It was our first trip together. We were still long distance. She had never seen California, and I couldn’t wait to show her, to take her to the coastline so we could watch the sunset over the ocean and eat a mountain of fried seafood.

On Vanderpump Rules, Jax proposes to Brittany at Neptune’s Net less than a year after he’s caught cheating on her. He has cheated on everyone he has ever been with and yet is convincing in his lies to his castmates and friends, producers of the show, viewers. Vanderpump Rules is often an eerie display of how easy it is for some people to lie and manipulate. Jax proposes to Brittany over fried seafood, and she says yes immediately. She says so many times over the course of the season that he has changed, that she knows he’ll never cheat on her again. Of course, that’s an impossible thing to know. But I envy her ability to trust. And I also fear it. Season seven ends with the two still engaged, with Jax — one of the most vile reality TV villains of the past decade — supposedly still on his redemption path.

I hate how much I worry about Brittany Cartwright from Bravo’s Vanderpump Rules. 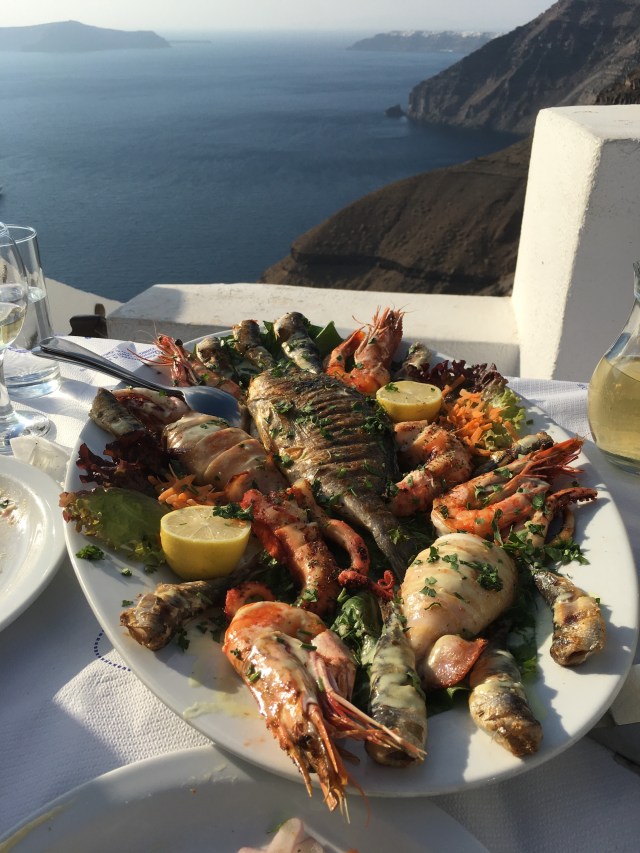 This is it. The best seafood platter I’ve had in my life up to this point. Are you kidding me?! That view?! That spread of butter- and lemon-doused beauties? I could cry looking at this perfect photo. We spent hours with this meal, one of the most memorable of my life. Inexplicably, we were the only ones in the restaurant, and we held hands across the table, and the sun and sea and cliffs were behind her.

Will I ever have a seafood platter as good as this one again? (I hope so.) 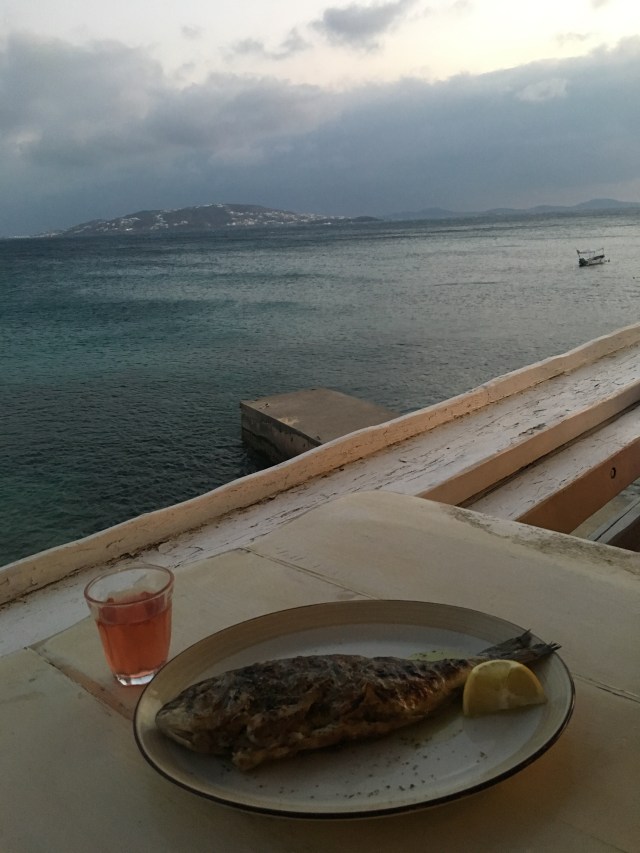 Mykonos is the gay party island of Greece, and we did our fair share of gay partying that week, but we also found a quiet taverna away from everything else.

I always, always want to be eating grilled fish with lemon by the sea, to hear soft waves and to drink wine so acidic and dry it burns a little. 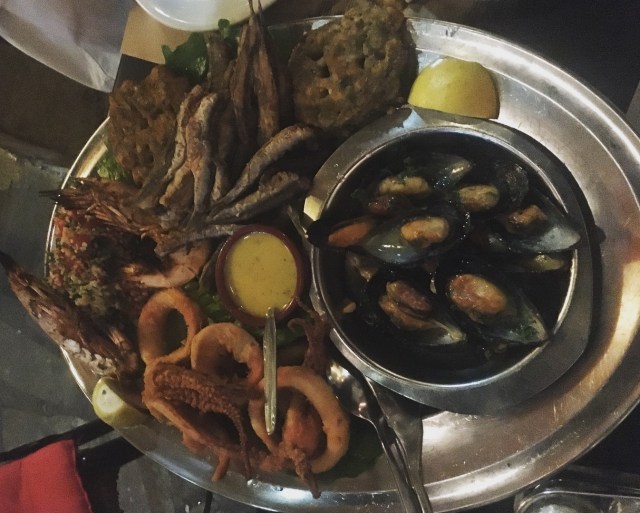 If you couldn’t tell by this point, Greece is a wonderful place to eat piles and piles of seafood. 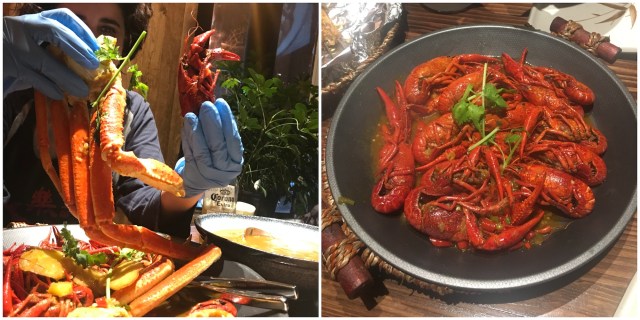 The Chinese-style seafood boils at Le Sia are among my favorite things to eat in New York City. Spicy, aromatic crustaceans swim in juices that dribble and spray when you snap off their heads. These seafood boils are so messy that they come with gloves and aprons. On this night, despite all the protection, I still managed to splatter myself with a seafood crime scene.

The affair started a week later. 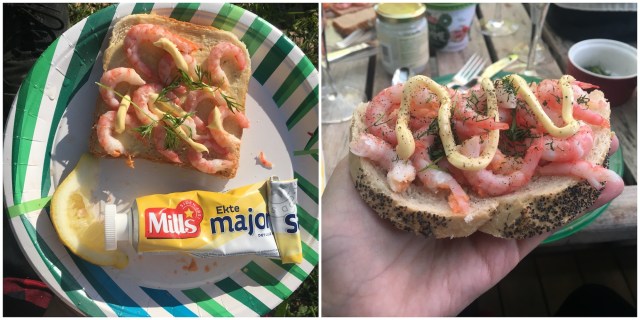 The shrimp in Norway is the best in the whole world. It’s entirely different from shrimp in the U.S. — smaller, softer, salty but also a little sweet. They hold onto the ocean’s taste, and you’re supposed to eat them with just dill, lemon, mayonnaise, on white bread. Taking the tails off and either discarding or sucking off the eggs that sometimes come attached when you buy them fresh takes time and effort — so much time and effort just for one little sandwich. But it’s worth it.

I can recall the exact, perfect taste of these shrimp sandwiches, crave them often. That hasn’t changed. I think some people would taste something bitter now, a sludgy aftertaste as a manifestation of tainted memory. Not me though. Those little, pink shrimp might be attached to dark memories now, but their perfect taste lingers in my mouth. A fun side effect of betrayal is suddenly questioning everything. But while I sometimes doubt my other senses — what I saw, what I felt, what I heard — taste remains impeccably intact. I don’t ever doubt what I tasted; those memories on my tongue never change, even when everything else does.

I struggle all the time with language when it comes to the affair. I hate the phrase “the other woman.” I hate how often I even say the words “the affair.” Sometimes I hate that there’s no real, accurate word to describe me — the person cheated on. Why do I want a fucking word? I don’t want it to be a part of my identity.

It’s probably hard to believe since I spend so much time writing, thinking, talking about it, but I don’t want to be defined by it. I do want to let go. But my life felt cracked open like a crab leg, and there were things removed from me that I’m not sure I’ll ever get back.

I still say “we” all the time, have trouble separating myself even in language. 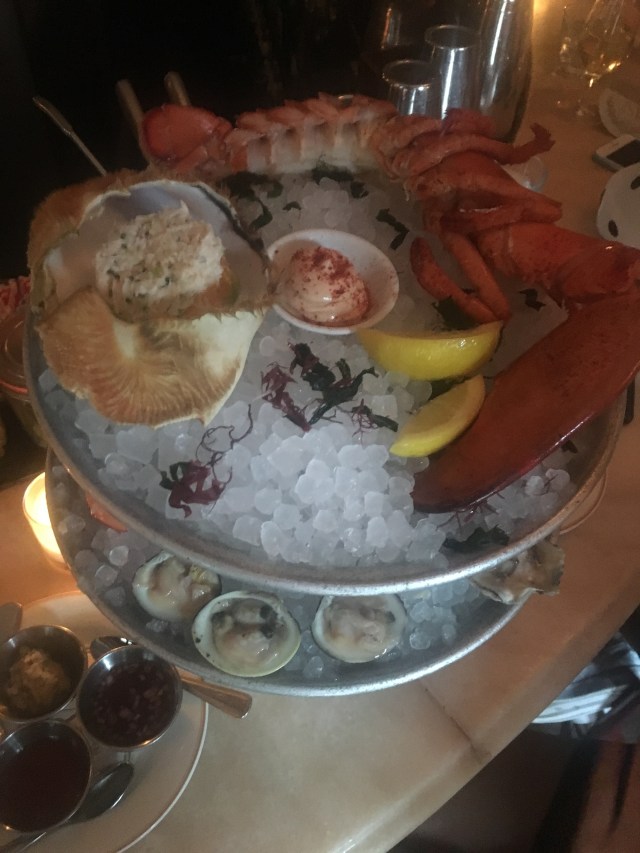 One day after so many bad days that I could barely keep track anymore, I texted my friend and asked her if she would like to wear blazers and split a seafood tower with me. That decision alone — to do something nice that I loved — felt huge at the time. We ate littlenecks and oysters and lobster and crab salad, and when we were finished, we ordered a round of razor neck clams, their long silver shell-bellies filled with bright green chilies. 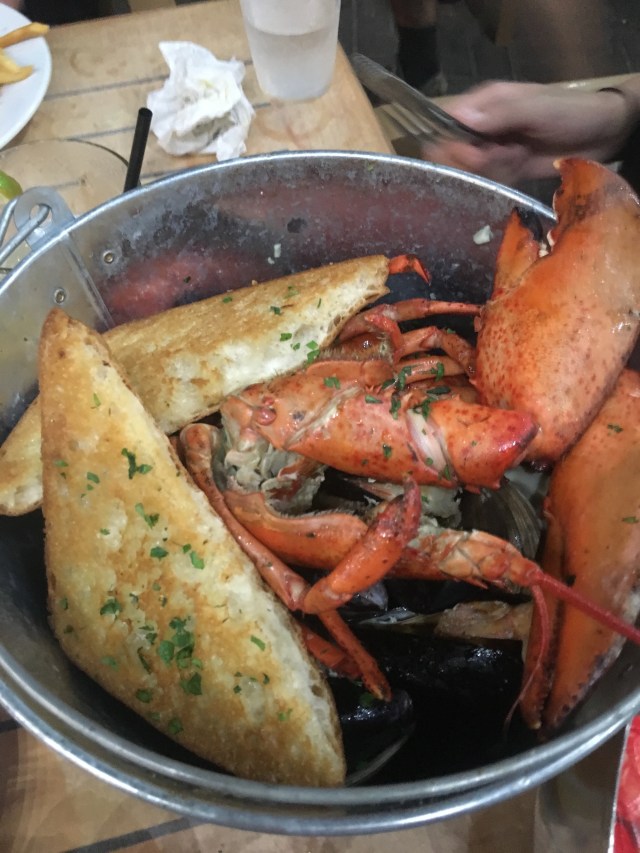 According to my memories and journals, the number of days between mid-June 2018 and early October 2018 when I did not cry could be counted on one hand. One of those tearless days was thanks to Janelle Monae, and another was thanks to this bucket of steamed seafood at a divey place in Long Beach.

I was still trying to make it work.

There was a lot of pretending that happened that day, but I didn’t have to fake it when it came to this bucket of bliss. 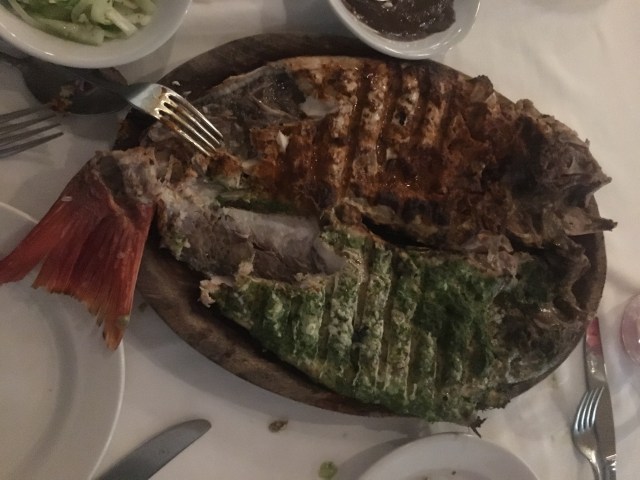 Last fall, I wasn’t really sure what I was doing in regards to — checks notes — ANYTHING. So When the same friend who whisked me off to a seafood tower midweek a few months before then asked if I wanted to come with her to Mexico City, I said why the hell not.

I’d never traveled with just a friend before. It was always me or me and my family or me and her.

But this particular friend could eat like me, and that’s what I suddenly craved to have again — an eating partner. Someone to fuck up a plateful of fish with me. Someone to order so much food that the server is like um, are you sure? Someone with which to share this whole grilled fish, split open, half covered in red chili adobo rub and the other half with a green parsley rub. We scooped the flesh into warm, soft corn tortillas with beans. And we ordered even more fish — tuna tostadas, spicy shrimp soup, clam pasta.

I forgot to take a picture of this one, but I had been craving crab for weeks, and I finally had it, and there was no time for photos or manners or anything other than feeding my insatiable appetite for crustaceans, baby!

Picture this: broiled scallops and shrimp, grilled mahi, a pound of snow crab legs, and a seafood pot pie (!!!). Picture a restaurant in a tree. Picture kissing and hands on hands and hands on legs and sunshine and branches and pale beers and a mediocre cover band. Picture me snapping crab legs in two and pulling meat out with my teeth like a goddamn animal.

Picture the start of a very different summer from last.

Join A+
Related:for your consideration