Today, the Dream 9 — nine activists who have been held in an immigration detention center as part of a protest meant to draw attention to the Obama administration’s deportation policies — were released from federal custody, where they had been held since July 22. Immigration officers found that the nine had “credible fear of persecution or torture in their birth country” of Mexico, and therefore could not be removed from the US. The Dream 9 will be able to see their families for the first time since they were taken into custody, and were greeted by other activists celebrating this step forward when they got off the bus they were transported to Tucson in. 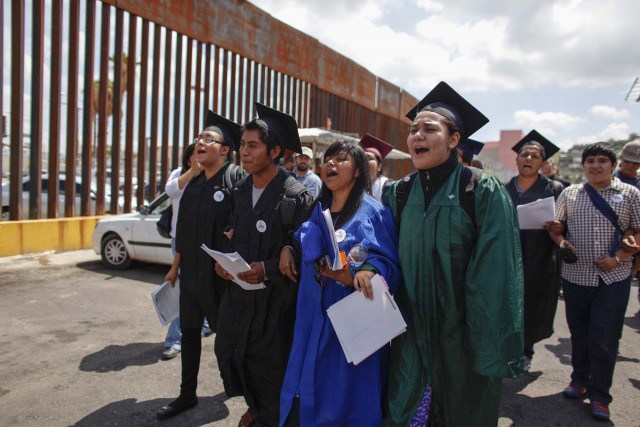 The Dream 9, named for the Dream Act, are all young people who were brought to the US at a young age and have been living, working, studying, and contributing to their communities as undocumented immigrants. Many of the 9, like Lulú Martinez, have been engaging in radical activism for years. Along with Marco Saavedra (also a member of the Dream 9) and Mohammad Abdollahi (who helped organize the Dream 9 protest from outside), Martinez has been infiltrating detention centers to agitate and educate their detainees about their rights since 2011. The Dream 9 took the protest to the next level by self-deporting — leaving the US and then attempting to cross the border to return, knowing that they would be stopped. Their goal is to turn a spotlight on the plight of those who remain in detention centers and are being deported despite the Obama administration’s promises to review deportations on a case-by-case basis and focus resources on “high-priority targets” like felons and not active community members with jobs, families, and clean records, or people like the Dream 9 who were brought to the US as children. Lizbeth Mateo, one of the Dream 9, says she met several other people in the detention center who had a similar immigration history as her and had been picked up by immigration officials:

“I want the government to recognize that there is a group of people, Dreamers, who grew up in this country and belong here because these are their homes,” Mateo said. “They shouldn’t have to go through what we went through. They should come home.”

Today is only one step in the process of the Dream 9’s protest. Although the nine have been released from custody, that doesn’t mean they’ve been granted asylum in the US. For that, they’ll need to take their case to an immigration judge, who may take years to decide whether they should be granted asylum. It’s a harrowing prospect, especially given that the nine have emigrated from Mexico — 98% of Mexican asylum cases are denied. Without a change in immigration law, the nine can’t be secure in their status. Which, of course, is the point of the protest — to bring attention to the extreme conditions that detainees are subjected to (six of the nine were put into solitary confinement for helping to organize a hunger strike), and also to highlight how a driven and successful woman like Lizbeth Mateo, who’s headed to law school in the fall and who enriches her communities, can be facing possible deportation at the same time. As Mateo put it, ““I know you’re going to think that I’m crazy for doing this.. but to be honest, I think it’s even crazier that I had to wait fifteen years to see my family.”