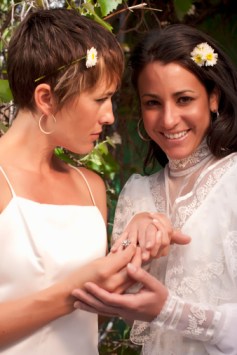 So, the Obama administration announced today that The Departments of Homeland Security and Justice will be starting a new process to review all 300,000 active deportation cases case-by-case to ensure that nobody is wasting time on silly cases (like gay people!) instead of more important cases (like serial killers!).

This is possibly relevant to your interests because, as aforementioned, LGBT people really get fucked by immigration, I even saw a thing about a San Francisco couple being split up by DOMA last night on the news (and by “the news” I mean The Daily Show)!

“[The group will] consider deportations on a case-by-case basis and focus its resources and efforts on high priority targets — individuals who pose a threat to public safety and national security or repeat immigration law violators. And while the review won’t explicitly offer categorical relief for any single group — like bi-national same-sex couples, children who were brought to America at a young age, pregnant women, military veterans — the process could provide greater protection for these populations. LGBT families and same-sex couples will be considered as families and could benefit from the discretion of the working group.”

A “senior administration official” said this effort will set aside low-priority folks in favor of focusing more on “our more serious cases of convicted criminals and other high priority categories.”

So, no luck for those of you gay-married to convicted criminals — but will the review help couples like Bradford Wells and Anthony John Makk of San Francisco? A week ago the Obama administration denied immigration benefits to the couple, citing DOMA, which is especially unfortunate as Wells is the primary caregiver for his AIDS-afflicted husband.

Citing the Defense of Marriage Act, the U.S. Citizenship and Immigration services denied immigration benefits to this married gay couple from San Francisco, and ordered the expulsion of a man who is the primary caregiver to his AIDS-afflicted spouse. Makk is Australian and the two married in Massachusetts seven years ago and have been living together now for 19 years. He has been ordered to leave the U.S. by August 25th.

“The claimed relationship between the petitioner and the beneficiary is not a petitionable relationship. For a relationship to qualify as a marriage for purposes of federal law, one partner must be a man and the other a woman.“

Since that decision was made on July 26, Immigration Equality has been working with the couple to appeal their case — more specifically, Wells has been pleading with Homeland Security Secretary Janet Napolitano and President Obama to intervene on their behalf.

And! The thing is that Makk is not only Wells’s spouse but he’s also the primary caretaker of a citizen, has no criminal history, has legally resided in the US on various visas for a long time and left his job in Australia to start a business in San Francisco — in short, he’s a productive member of society, and has several factors going for him that are specifically outlined in the Obama administration’s new guidelines. So along with the Obama administration’s decision to stop defending DOMA, this ruling against Makk and Wells came as a bit of a surprise. Furthermore, even before today’s announcement, the deportations were supposed to be focused on “national security, border security, public safety and the integrity of the immigration system.”

I’m not saying that everything in the whole world is about us, but does anyone else feel like it’s kinda about us? At least this one thing?

The saga of binational gay couples and immigration law has so far consistently been one step forward, two steps back, and one and three quarters steps forward again. This seems like more of the same. It’s good news that there seems to be a concerted effort to treat committed, healthy families more generously than convicted felons, but it’s hard to ignore the fact that this change didn’t come fast enough for some — Makk’s deportation date is only a week away, and he’s not likely to see a reprieve by the 25th. For him — and his husband — this change is too little, too late.