A lot of Batwoman fans (and to be honest, a lot of comic fans overall) were worried when the creative team of W. Haden Blackman and J.H. Williams III left the book after DC refused to allow them to have Kate Kane (Batwoman) marry her longtime girlfriend, police detective Maggie Sawyer. Now, it looks like those fears were completely justified. Although the new creative team of Marc Andreyko on writing and mostly Jeremy Haun on art has done some interesting things with the character, their current storyline brings the book down to a new low. Almost immediately after breaking up with Maggie, Kate (as Batwoman) was battling the vampire supervillain Nocturna, who then discovered her identity, broke into her house and proceeded to use her vampire powers to trick Kate into thinking she was Maggie, then having sex with her while Kate was unable to give consent. To put it shortly, Nocturna raped Kate Kane. 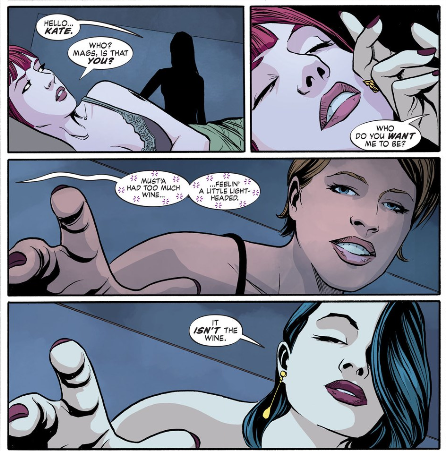 Nocturna, aka Natalie Mitternacht (get it? her name means “midnight”), first appeared in Batwoman #32 and immediately had an effect on Batwoman’s life. Shortly after the two fought for the first time, Batwoman was having nightmares where she was a vampire and wondering why she feels strangely drawn to her. This was all happening while Maggie, whom she was still engaged to, was going through a harsh custody battle with her ex that led to Kate breaking up with her.

After Nocturna figures out who Kate is and breaks into her house, she approaches Kate’s bed and starts to use her powers on Kate. Kate literally says “musta had too much wine… feelin’ a little light headed” as Nocturna is using magic to make it appear as though she is actually Maggie. Nocturna proudly tells her that “it isn’t the wine” and then proceeds to start feeding.

Erin Kane on Twitter notified me of this problem and I’m thankful that she did. While I’ve seen some people talk about how these issues felt dirty, or left them with a gross feeling after reading them, people are being surprisingly quiet on calling the book out for raping its main character. 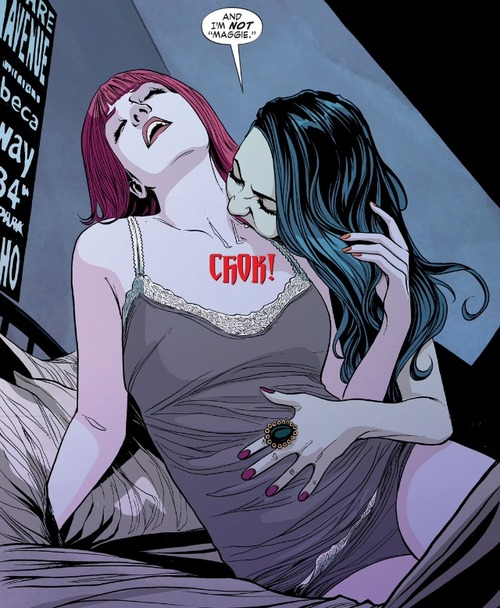 from Batwoman #34 art by Jeremy Haun

However, there’s no doubt about it; this is rape. Kate thinks that Nocturna is someone else as she approaches her bed. Kate says that she feels confused and weak because of the vampire magic Nocturna is using. Kate blacks out and can’t remember anything or say no while Nocturna feeds on her and has sex with her. She’s basically using a date rape drug, but in the comic it’s called vampirism.

One guess as to why Andreyko and the editors at DC are doing this is because it gives them an opportunity to have lesbian sex scenes — which would imply that this is supposed to be sexy. You can see that the way Kate and Nocturna are drawn both in issue #34 and in #36 in Kate’s flashback is catering to the male gaze. And that makes this even more insidious. This panel where Nocturna is turning Kate is clearly more than just a bite on the neck – it’s a precursor to, or even part of sex. Except it’s nonconsensual, so what we are actually witnessing is rape. Why do the writers think this is sexy? I mean, the obvious answer is that rape culture has made people think that it’s sexy. I feel like this shouldn’t need to be said, but there’s nothing sexy at all about someone doing something to you that makes you unable to say “yes” or “no” and then black out and completely forget that the two of you have sex.

Just because it’s a vampire doesn’t mean it’s okay. Obviously vampires are known for being sexy, but really that mostly comes from them being sexual predators. Classic vampires like Dracula would hypnotize the women they would then draw blood from in a clear metaphor for rape. In a more modern version, Edward and Bella’s relationship in the Twilight series is notoriously seen as abusive to many. This is again true in Batwoman. It’s not like Kate went to Nocturna and asked her to turn her into a vampire. Nocturna forced it on her, again without consent. And when you have vampirism and sex so closely tied together, like they are in this comic, you can’t ignore that aspect of it. 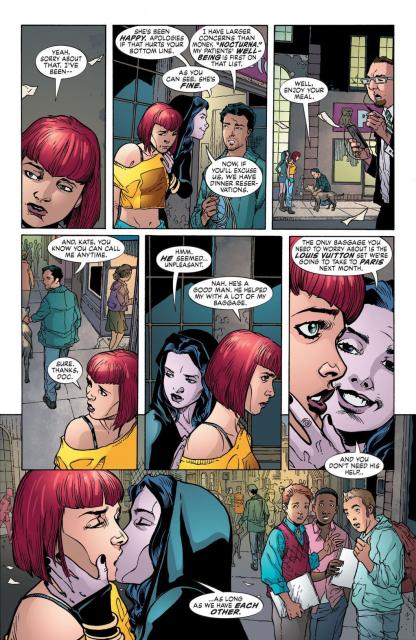 Their relationship isn’t very healthy the rest of the time either. Batwoman is clearly being manipulated and controlled by Nocturna. In basically every moment after their relationship starts, Kate clearly doesn’t want to do whatever Nocturna wants to do and then Nocturna just speaks a few words to her or touches her and completely changes her mind. Even without the rape, that’s already enough of an unhealthy relationship. If you can’t read the above panels, Kate and Nocturna are going out to dinner when they bump into Kate’s old therapist. Kate is trying to apologize for not going to see him when Nocturna steps in and rudely pushes him away and then tells the very distressed looking Kate “… you don’t need his help as long as we have each other” as she kisses her. 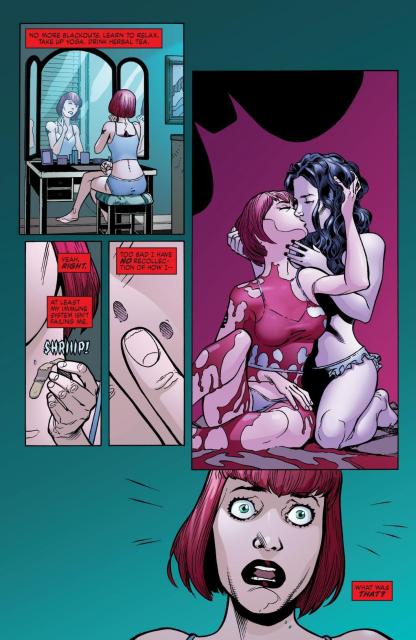 Unfortunately, DC Comics has a long history of using rape in gimmicky and cheap ways. Deathstroke was raping the teenage Terra in Teen Titans; in Watchmen Silk Spectre was raped by The Comedian; both Grace Choi and The Huntress have origin stories involving being raped; the best-selling Identity Crisis shows the brutal rape of Sue Dibney by the previously laughable supervillain Dr. Light; even Batman, The Green Arrow and Nightwing have all been raped. The DC wiki even has an entire page dedicated to rape in the DC Universe. This also fits neatly into the history of the Women in Refrigerators trope, where women are often brutally tortured, injured and killed to advance storylines (and usually give men motivation.) While there isn’t a man in this comic who is being motivated, we clearly have a case of a woman being raped and abused just to create what the writers and editors think is a compelling (and sexy) story.

Yes, rape and sexual assault and abusive relationships happen in real life, and yes, sometimes fiction, including comic books, need to address these real life issues. But what Batwoman is doing so far isn’t addressing it. It’s simply showing it off and using it to titillate and create drama. Andreyko, Haun, Jeanty and the editors at DC are simply using rape as a gimmick to sell comics, and unfortunately, to abuse one of their best characters and perpetuate rape culture.

The Movement Vol. 2 Fighting for the Future (DC)