A few months ago I brought you a preview of the comic The Pervert and an interview with its creators; now it’s time for a full review. Michelle Perez and Remy Boydell have created a trans graphic novel unlike anything I’ve ever seen. It’s like removing an ingrown toenail or getting an anal swab to check for STDs: it will make you wildly uncomfortable, but it also makes your life better. The Pervert is definitely going to turn off some readers; it’s full of swearing and violent homophobia and transphobia and explicit sex scenes. But for the people who read it, it will stick with them forever. The book tells the story of a trans woman going through her transition as she does sex work and tries to find a little bit of happiness. She forms relationships with other sex workers, other trans women and johns. The book doesn’t really have a traditional narrative structure, but its story is clear, and it shows us what life is like for a large number of queer women and the people in their lives. This is the kind of book that will give young punk trans kids the final push they need to transition and light a fire of fear and excitement in the hearts of young trans non-punks that will one day catch their whole body on fire with transness. This book is a wakeup call. 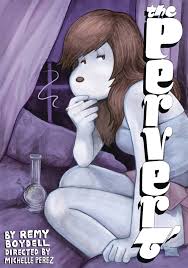 God, this book was a brutal read. Perez had told me, “I didn’t wanna write an after school special. The world is more complicated than that.” She was underselling it. This book is full of AIDS tests, full penetration, suicidal ideation and uncomfortable emotions. It’s a real story that doesn’t try to gussy itself up at all. It reads like a Goya painting looks. Perez is telling stories that are so different from other mainstream comics, but will also resonate with so, so many people. You don’t need to be trans or a sex worker or depressed to see yourself in this book. Perez is able to capture a shared experience that Millenials have where we just can’t seem to swim upriver no matter what or how hard we try. Sometimes when I read books I think “wow, I’d love to live in the world this person has created;” with The Pervert, Perez has written a book where I think “wow, I already do live in the world this person has created.” 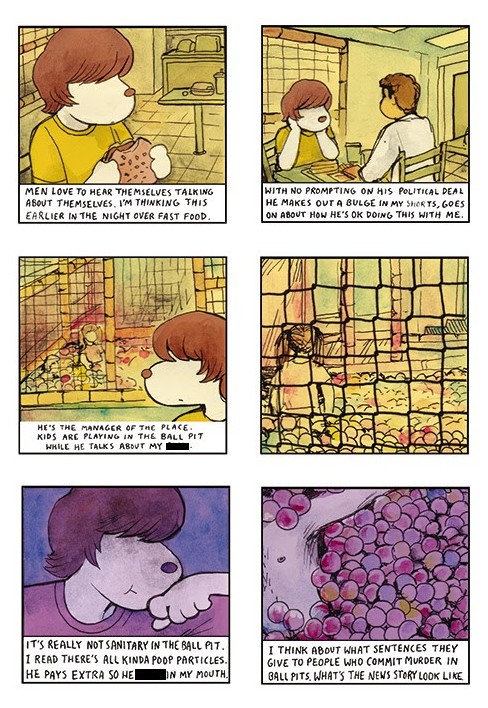 While it’s brutal, there’s also kindness and love in the book. One of the clients we meet had previously had a relationship with a trans woman and the way he loves her and talks to her warmed my heart. He’s never shown as a perfect person, but he’s given sympathy, because he’s a human being and he’s trying. I love these parts of the book. There are also splash pages of art that is simply beautiful. Sometimes the subject matter is something gruesome, like a car crash or deer carcass, but it’s still overwhelmingly beautiful.

I can’t imagine this book being done by anyone else. Just as Perez’s writing is obviously the only way to tell this unique and personal story, Boydell’s art is essential to this story. She creates a muted and subdued world of furries and humans who always seem like they’re half asleep or ready for the day to end. Even when people are inside, you can still tell that it’s a cloudy, rainy day in the Pacific Northwest. When characters who look like Clifford the Big Red Dog or Snoopy show up, they make the world seem so much more real. It’s like when you’re walking down the street and you see someone who reminds you of an old friend, or when the grocery store clerk reminds you of Mr. Rogers. It’s weird and more than a little surreal, but also life wouldn’t be real life without it. 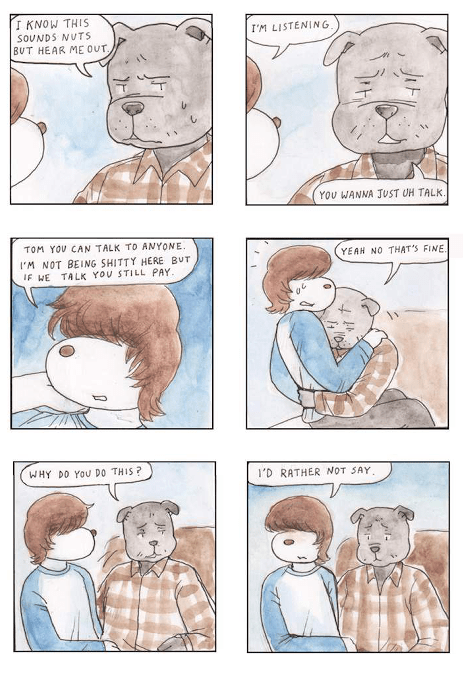 The way Boydell draws trans bodies in this book is incredible. There’s no politeness, no shame in her drawings. When I say there’s explicit nudity in this book, I don’t just mean that it shows genitals, I mean that it shows nudity and sex that’s not always pretty by mainstream standards. I can’t wait to return to this book over and over again. Reading it was like digging deep into the earth. It was dirty, it was hard and it was sometimes uncomfortable — but it also was good work, the dirt was rich and sensual and in the end, you’ll see things in a completely different way.

Jem and the Holograms Dimensions TP

Batgirl and the Birds of Prey #22