The Legend of Korra comic book is at full steam and recently a second volume, The Legend of Korra: Turf Wars Part Two, was released. Ostensibly, the plot continues to follow the fallout of the Spirit World portal opening, and then the fight between gang members and spirits at the end of the first book. While Korra is trying to figure out how to get the Spirit World back on her side and the side of the people, and she’s trying to balance the two worlds, she also has to put up with the President essentially turning the Spirit Portal into a war zone. Asami is building a housing complex for refugees, but ends up on the bad side of new Triads. Mako, Bolin and Lin Bei Fong are trying to shut down the Triads once and for all. And if you thought Tokuga was a threat in the first book of this series, boy howdy have you got a surprise in store for you. Now, all of that is going on while we also have the Korrasami relationship at the forefront of the whole thing. 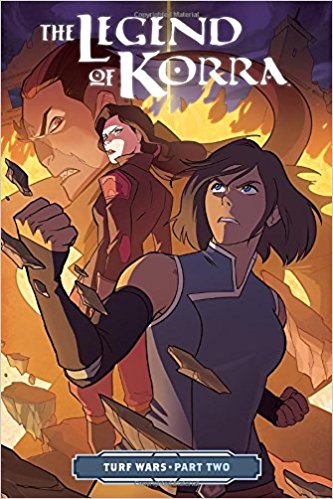 I was about to write, “this book almost seems like fan service,” but, nope, it doesn’t just seem that way; it is fan service. So much of the book is focused on Korra and Asami and their relationship. There would be times when Mako and Bolin would show up and I would think, “oh yeah, they’re kind of main characters too.” Even when they do show up, we get to see Bolin pointedly remind Mako that both of his ex-girlfriends are dating each other in a brilliant moment that reminds us who won that shipping war. Korra and Asami continue to grow as a couple and have struggles and victories and flaws and special moments that really flesh them out as both individual characters and as a couple. 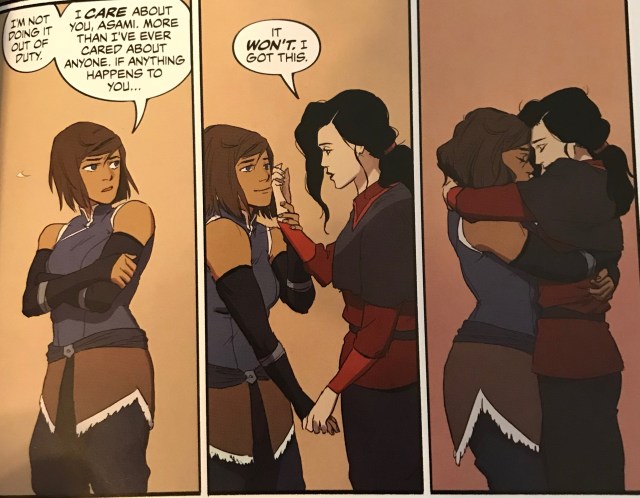 One plot point in the book could easily turn into a bad trope for women — but by queering it, the series takes one huge step away from that. Plus, because of the track record of the series I’m fully confident they’ll do even more to sidestep it and turn into something really awesome for both Korra and Asami. That’s one of the things I love most about this series, both the cartoon and the comic; they’re so great at turning tropes on their head and turning them into great moments for representation. If the third book in the series is anywhere near as good as the first two, this is going to be one of the best action comic arcs I’ve ever read. 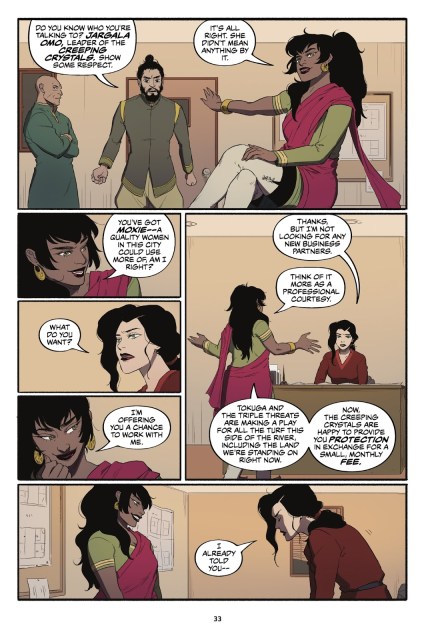 Of course, Irene Koh’s art remains a perfect fit for this book. Not only is she a queer Asian-American woman, but her style is dynamic and fluid and she does an incredible job of expanding on the fashion and style of the series. In this book we see some people looking like we’ve never seen before in the Avatar world. Koh has drawn in people wearing hijabs and head coverings, something that makes total sense for a fantasy society based partially on South Asia. There’s also a delightfully villainous character we get to see more of, Jargala Omo, who is clearly inspired by Bangladeshi and Indian cultures. Also, if you ask me, I think she might be a trans woman. Koh is the perfect artist for this project and I’m so excited that the future of Korrasami is in her hands.