We’ve seen some great strides in trans characters in comics, but we’ve still got a long way to go. When the average person thinks of comic books, they think of superheroes, and this is where we’re lacking the most. There was Sera from Marvel’s Angela books, who was similar to a superhero, and over at Aftershock comics; there’s Chalice from Alters, who I like but is also a divisive character; and there’s Koi Boi from Marvel’s The Unbeatable Squirrel Girl who’s a trans guy. But we don’t have any trans women who are straight up superheroes and are popular or fan favorites.

Normally I offer this kind of service for a fee — I professionally consult on trans comics. But since the world might be ending soon and I want to see a trans woman superhero that I love before that happens, I decided to put some tips out here for free.

1. Make her a Woman of Color 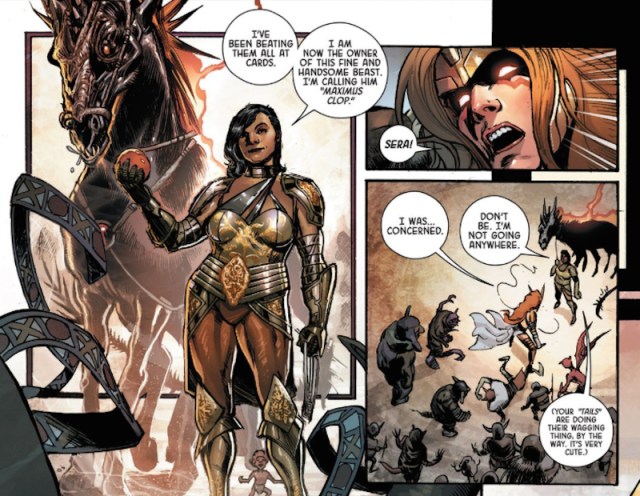 Trans women of color are not only the leaders of the trans and Queer rights movement but also are the ones of us who are most marginalized and at risk for anti-trans violence. By making your trans woman superhero a woman color, you’re recognizing and respecting those truths. This is especially true for Black trans women and, to a lesser extent, Latina trans women.

Trans history is filled with homeless people, sex workers and poor people, so if you write about trans characters, erasing that is erasing us. We need to honor our elders and heroes like Sylvia Rivera, Miss Major, Marsha P. Johnson and Janet Mock, and that means honoring sex workers and street people. And that’s cool! There are so many great stories you can write if you just respect people and treat them as human beings!

3. Give her trans and queer friends

Jo, a trans girl, talking to Barney, a non-binary kid. Art by Brooke A. Allen, colors by Maarta Laiho.

Trans people don’t live in a vacuum. Most of us have tons of friends who are trans; I know I do. If you want your character to be realistic at all, she needs to have other trans and queer friends.

4. Also give her superhero/familiar character friends 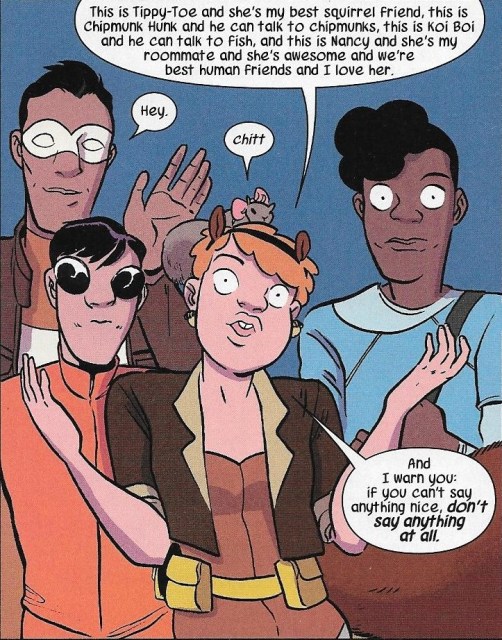 This will help ground her in the universe. We want her to stick around and become a permanent part of the comic world, and one of the best ways to do that is to make her be friends with Anya Corazon Spider-Girl or Traci Thirteen or Spoiler or Hellcat. Even if she works at the Daily Planet or Daily Bugle, that would help keep her around, because it would make her seem more like a permanent part of your comics universe.

5. Put at least one queer and/or trans woman on the creative team

One of the things that makes DC Comics Bombshells and Marvel’s Angela books so great and all the queer characters so awesome and relatable is that its writer, Marguerite Bennett, is a queer woman. The same goes for Marvel’s Patsy Walker, AKA Hellcat, which has a queer writer (Kate Leth) and a queer woman of color artist (Brittney Williams) who make it the most queernormative superhero comic ever. Marvel’s doing this again by having Gabby Rivera, a queer Latina, write the upcoming America Chavez book, a widely celebrated decision. Put some queer and trans people on this book too.

6. Don’t come up with what her name was before she transitioned

My favorite trans characters in comics have one thing in common (other than being trans): we don’t know their name before they transitioned. Sera from Angela is just Sera, Jo from Lumberjanes is just Jo, Ken Shiga (Koi Boi) from Squirrel Girl is just Ken. Readers don’t need to know a trans person’s birth name to know that they’re trans.

8. Give her a great costume

First of all, trans women of color are just super fashionable. It’s a fact. But also, this will again help her stick around longer and endear her to the fans. If she has an iconic look, the readers will have an easier time latching onto her. 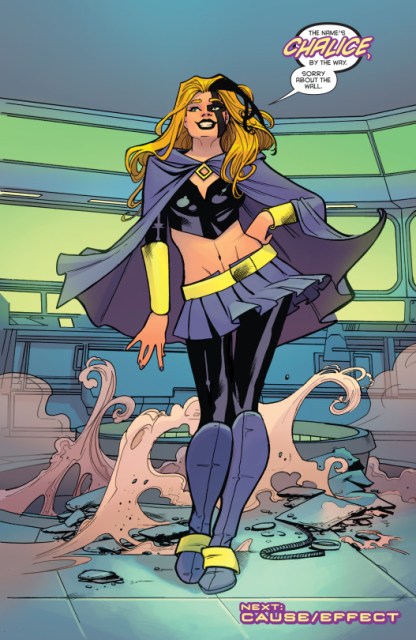 Trans people experience enough angst and sadness and anger in our real lives. We also experience enough from every piece of trans media ever made. Why not let us read a story where we’re happy for once? Plus, to be honest, most trans women are huge nerds, so you know that if we got superpowers we’d be happy as hell.

9. Make her a legacy hero or sidekick

This isn’t a must, but honestly it would help a lot. Most of the time when new superheroes are invented, they don’t become popular. That is, unless they’re a legacy character (someone who’s taken on the mantle of an older superhero) or a sidekick. Look at the popularity of Kate Bishop Hawkeye, X-23 Wolverine, Damien Wayne Robin, Stephanie Brown, Superboy, Miles Morales Spider-Man, Bucky, Captain Marvel, Amadeus Cho Hulk and of course Ms. Marvel. All of them are successful characters who were introduced (or reintroduced) fairly recently. The same thing could be done to integrate a trans woman into the DC or Marvel universe.

Queer people like fun books. We love The Unbeatable Squirrel Girl, Patsy Walker, AKA Hellcat, DC Comics Bombshells and Ms. Marvel. It’s important that there’s a lot of humor and character building, and not just broken up bank robberies and super villain fights. Give us a fun, funny, well written comic starring a trans woman of color and we’ll love you forever.