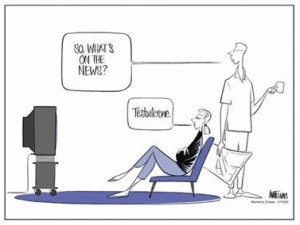 The Newsroom, HBO’s newest dramatic series by Aaron Sorkin, has recently received criticism for its negative and insulting portrayal of women. In “The Newsroom Is Incredibly Hostile Toward Women,” Margaret Lyons writes that within the fictional world of the show, “There is no insult more grave than being a woman.” And she definitely has a point. This a show dominated by obnoxiously idealistic men who are obsessed with their own ideas and emotional growth. There are quite a few of them, in fact, that I’d really like to add to this handy list of the most insufferable men on television. Sure, there are several female characters, but so far they’re anxious, desperate and generally on the verge of emotional breakdown. According to Lyons, the writing of these characters points to a larger problem with the way the show is written.

I definitely agree with her up to a point, but to say that the writing of the show is hostile to women is an oversimplification. This is a show about the people who tell news. And news making, like the vast majority of industries, is traditionally a boys’ club. It seems to me like it’s not so much that Aaron Sorkin hates women, but that he is writing about an institution that has historically excluded women and would probably continue to do so if there weren’t laws in place to prevent discrimination. 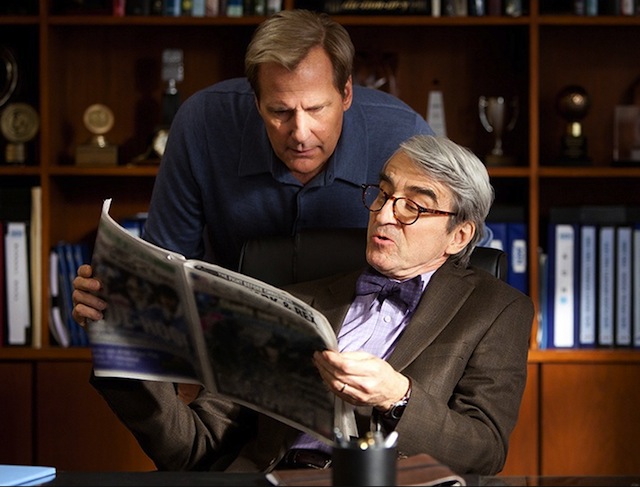 In real life 2010, the year the show begins, the number of women directors in TV news was 29% — a record high. If women were only recently given more of a voice in the newsroom in 2010, it doesn’t take much imagination to picture the hostility they were probably met with. To me, the show does a good job of illustrating that experience; the female characters on the show are treated as though they don’t deserve to share space with the noble newsmen around them and are generally regarded with suspicion and doubt.

It’s no wonder the female characters are anxious! They are fighting for the right to be accepted as professionals, an exhausting, daunting thing to have to do every minute of every day. Sure, they make silly mistakes: MacKenzie McHale, the new executive producer, accidentally sends a personal email to the entire staff. But you know what? If I had a clause worked into my contract that I could potentially be fired by my ex at the end of each week like she does, I’d be a nervous wreck too. I’m not the only one; anxiety has been proven to decrease one’s ability to perform tasks efficiently. 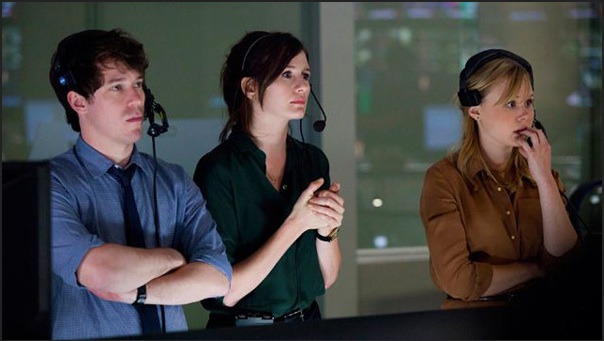 In terms of the less important female characters on the show, Lyons does make some solid points about how the male characters view their interest in topics other than hard news as a grave offense and also as a sign of stupidity. She writes that the most recent episode “seemed to be about how fashion is dumb and news is smart, how gossip is a social cancer and cable news is noble, that everyone else is an idiot and Will (and sometimes Charlie) is brilliant.” While she concedes that maybe this theme can be attributed to the main character’s “dated misogyny,” she still believes that the overwhelming repetition of gendered intelligence reveals a bias on the part of the writer.

Historically, this divide of interest along gendered lines has existed due to women’s exclusion from the hard news world. It was the boys, not the girls, on the bus, after all, who traditionally covered things like presidential campaigns. To this day, women still make up only 20% of the bylines in traditional news sources, but cover at least half of the editorials on gender, family, and style.

So why, if there are anti-discrimination laws in place, does this divide remain present today? And why on an HBO show about news-making in 2010 are women characters made to feel like they aren’t smart enough for hard news, but dumb for covering soft news? While critiques of the show blame its writer, I think that it might be an accurate reflection of a troubling truth: that even though struggles for women’s rights opened the doors to equality in the newsroom, men still act like they own it.

It’s no wonder that women tend to avoid pitching hard news stories when the prevailing attitude is that they don’t belong in the world of news. According to Katherine Lanpher, a senior seminar leader of the Op-Ed Project, many women feel confident in their expertise of soft news stories but when it comes to anything else, “they think that…there will always be someone who knows more.” The men on this show definitely act as though they know more. Lanpher believes that is is another artifact of social conditioning. “[If] you’re a white male who’s gone to one of the 10 top schools, you have cultural expectations that you will be heard and that people want to hear you.” The female characters, on the other hand, are left vying against each other — often working twice as hard — for the chance to be heard.

The misogyny that pervades The Newsroom actually feels a lot like Mad Men in that the men think they run the world while women thanklessly run around holding everything together. The women on both shows work harder than their male counterparts but receive little to no recognition for their efforts. Instead, they’re viewed as little more than sex objects, regardless of their proven professional abilities. Anchor Aaron Sorkin may very well be the new Don Draper.

Maggie Jordon, an assistant turned associate producer, seems to be a young Peggy Olsen — brilliant, innocent, nervous, fumbling, but confident in her intelligence and willing to fight for professional respect. Sure, Maggie’s in a love triangle, but Peggy has her fair share of romantic drama too. Because of Peggy’s drive and talent, she eventually becomes Don Draper’s second in command — and Maggie seems to be at the beginning of a very similar journey.

The girls on the bus are perfectly capable of covering the things the boys do, but up until recently, our bus wasn’t even allowed to drive down the same street. Unlike Mad Men though, The Newsroom begins at a time long after that road was legally opened up. The Newsroom‘s women are still fighting to prove they deserve to explore it — much to the horror of the many men who would like to believe that they own hard news. It makes for a great premise for a television show, and I’m really looking forward to seeing where it goes.