Dissent is a quarterly magazine of political ideas. It started as the paper love child of 1950s New York intellectuals fed up with American societal complacency, and has been around for almost six decades now, publishing the kind of ferocious dissident articles that more mainstream organs end up watering down, cribbing from, and describing as “literary Molotov cocktails.” It calls itself left-wing, but rejects party affiliations, tends to hold fast to the ideals of socialism, and really likes to critique the left, too. Sounds like a seriously good way to spend an afternoon, right? If you like to hold your Dissent in your hands, you can subscribe and order back issues (the 1980 “After Afghanistan” issue probably pairs well with the 2011 “How To Leave Afghanistan” issue, and a really strong gin and tonic) at the magazine’s website. If you prefer, like me, to quietly dissent while at your desk job, you’re in luck – Dissent’s Winter 2013 issue is largely dedicated to The New Feminism, most of the articles are free to read online, and it’s the kind of provocative, idea-studded, perspective-shifting doozy that will make you wish your laptop came with a bullhorn.

“Introduction: The New Feminism,” by associate editor Sarah Leonard (whose twitter feed is like a descending Dissent all the time), takes mainstream media to task for lauding the new “trend” of female CEOs while ignoring the very real economic sexism that still hobbles the rest of us. It sets the tone for (and pulls all the best statistics from) the rest of the issue. Sarah Jaffe examines this further in “Trickle-Down Feminism,” quoting Laurie Penny to point out that “while we all worry about the glass ceiling, there are millions of women standing in the basement—and the basement is flooding.” Later, Madeline Schwartz turns a feminist lens on interns – “the happy housewives of the working world” – positing that interns are put in a “historically feminine position” because they are expected to be flexible, compliant, and thankful, and diving into a fascinating discussion of the history of “women’s work” and the housework wage movement. 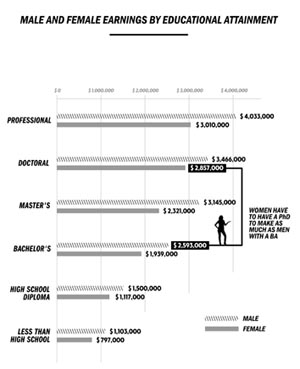 In “Girl Geeks and Boy Kings,” Melissa Gira Grant, who worked in Silicon Valley during the social media boom, paints Facebook as a company and a website that has never truly left behind its origins as “Facemash,[which was] built from photos of Harvard University women and presented to users . . . to vote on their attractiveness” (she also describes Mark Zuckerberg’s infamous hoodie-and-Adidas style as “class drag”). Michael Walzer, another co-editor, reconsiders his opinions about social justice spheres in light of criticism from feminists such as the late, great Susan Moller Okin. The issue is rounded out by two examinations of Roe v. Wade as it turns forty: one, from Carole Joffe, picks apart its benefits and costs (fewer women die needlessly, but the need to constantly refocus on this issue in the face of unrelenting right-wing opposition takes the spotlight away from other, equally pressing ones). The second, by Akiba Solomon, is a personal essay examining how the author, despite being very involved in peer sex education in the 90s, was reluctant to have public opinions about abortion because it “seemed like socio-political suicide in my highly segregated, decidedly African American slice of Philadelphia community life.” I read them all in a row and feel sharp-eyed, somehow both sated and hungry, and armed to the teeth for future discussions.

If you’ve only got time for one article, make it “Caring On Stolen Time: A Nursing Home Diary,” a seething, heartbreaking personal essay by a Certified Nursing Assistant who publishes as JOMO. JOMO has been working in a nursing home for years, and recently led her fellow CNAs and staff members in an attempt to unionize. That process, and the entire experience of working in an elder care facility, is frustrating, fraught with Catch-22s, and indicative of the more general problems that face anyone who tries to stay human in the face of what JOMO describes as “the ticking time clock:”

“We found out that we were required under labor and industry law to have two paid fifteen-minute breaks . . . Failure to provide those breaks by the employer constituted a violation of labor law. To the outsider, fifteen minutes might seem short and insignificant. For us, it meant that we could take a short break from the mind-numbing cleaning, from the brisk walking, from being at the beck and call of the nurses . . . Those short breaks made a difference between a stressed-out, flustered attitude and a calm, patient compassion. It was incredibly important. And we were determined not to give it up anymore. Every day, we asked ourselves, “Can I squeeze in fifteen minutes of break time and be done in time?” Call lights were going off, residents were asking to be toileted, the required daily vital signs log was still incomplete. The one automated machine lift that six CNAs used was free right when it was time for the break. Our bodies’ need for a short respite was pitted against our residents’ immediate bodily needs. Having to weigh this moral dilemma every day was mentally exhausting. Either choice we made, we blocked out something deeply human—either our care for our own bodies or our care for others. Caring should not feel like stealing time.”

Similar dilemmas hang on every decision. JOMO’s bosses invoke her overseas family in order to encourage her to speedily respond to her residents, but when the CNAs try to revamp the system so that it’s more efficient, the bosses threaten to fire them, which would preclude them from bringing their own families to America. Some CNAs build mental walls to deal with “the daily moral ambiguity of whether or not to prioritize our own needs or the needs of the residents” and end up mistreating those residents, but fellow workers fear openly holding them accountable because the managers don’t handle it well. The other articles – with their policy citations, scary statistics, and invocations of the past – gain even more power when read in light of this one real person’s present and day-to-day struggles. JOMO can’t unionize her fellow workers, but feminists can band together in the larger world and make it better for all of us. Digging into Dissent is a good way to start.