Right off the bat I should probably tell you I never played the original Dishonored and cannot offer any meaningful comparison between this game and its predecessor. The primary reason for that is that in the first game you could only play as a dude, and I guess even as far back as 2012 I was feeling pretty done with paying AAA studios for New Adventures in Manpain. I’m not saying it’s right, it’s just where I’m at. For the same reason, I still haven’t played Witcher 3 even though it is apparently the best game ever according to a lot of smart people I am inclined to believe. But Geralt is an angsty fuckboy and I just can’t spend 100 hours of my life with that guy. In the case of Dishonored, Corvo seems alright I guess from what little I’ve seen of him, but I just don’t really care and I don’t really feel too bad about that. So I skipped it, and I forgot the game had ever existed until the Dishonored 2 trailer premiered at E3 in 2015 looking pretty rad, with a magical assassin lady protagonist this time.

Luckily it seems like I didn’t miss too much. The plot of the first game sounds almost exactly the same as the plot of this game: a coup, somebody you love gets killed(ish), you go on the lam, make some friends along the way, then come back stronger than ever to save the day. Effectively these games are The Lion King, except not nearly as hard as the SNES Lion King game, thank goodness.

Anyway. This time around you play as Emily Kaldwin, the young Empress of Dunwall who spends her nights doing assassination obstacle course practice with her father, Corvo, and her days I guess doing whatever it is Empresses do. (Technically you can play as Corvo if you want, but first of all why would you ever want that, and second of all the prologue and tutorial are from Emily’s point of view so it genuinely feels like the game was meant to be played from her POV all along.) 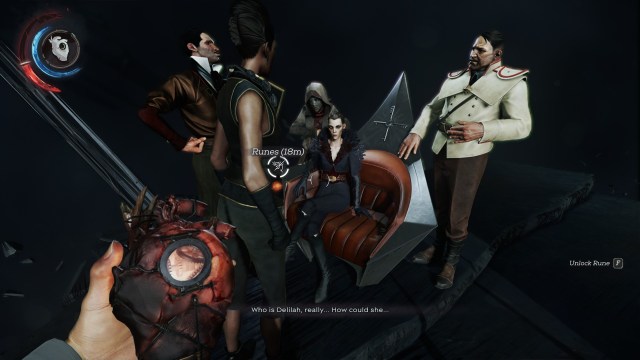 The action picks up in earnest on the anniversary of Emily’s mother’s murder (which was the catalyst for the first game’s plot), when in true fairytale fashion a Rude Witch shows up and usurps the throne, turns Corvo into a statue, and also accuses Emily of being a serial killer. So thorough. Good hair. She is possibly Emily’s aunt but definitely not very trustworthy. Either way I’m not supposed to have a crush on her but I have a type and what can you do. She has a minion voiced by Sam Rockwell who you can murder for killing your most loyal guard friend. I murdered him. He had my signet ring and I needed it to access my secret passageway. Also, revenge.

The real game begins there, with your escape from the palace down to the docks to slip aboard a boat with Sea Captain Meaghan Foster who has conspicuously good timing and more importantly is voiced by Rosario Dawson. And for sure, in my weakness I would have stayed with the Rude Witch if I could have, I like her evil face, but I’m possibly even happier to join Sea Captain Meaghan Foster’s crew, because boats are cooler than castles and she gives me a crossbow. Honestly though it’s just nice to be anywhere where boys are not in charge. 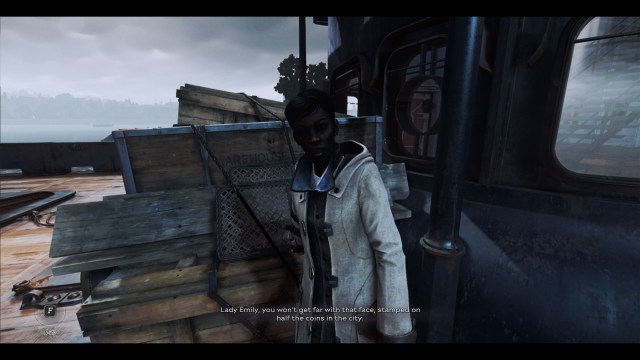 Once you’re safely settled on the boat you take a nap and dream of a Grumpy Ghost Boy who looks like a baby Jim Caviezel and tells you to make sure to pick up anything that looks disgusting and awful because it will give you magic powers. So you touch something gross, then take your sword and your gun and your crossbow and your magic out into the world and you sneak and you find clues and you achieve objectives, and then at the end of every mission you get kind of a scorecard that tells you how “chaotic” you were, which I didn’t find out until I was reading about the first game for research purposes is actually very important and not just for bragging. Apparently a high chaos level effects the ending you get? Like, in a bad way? Guys, I am WORRIED. 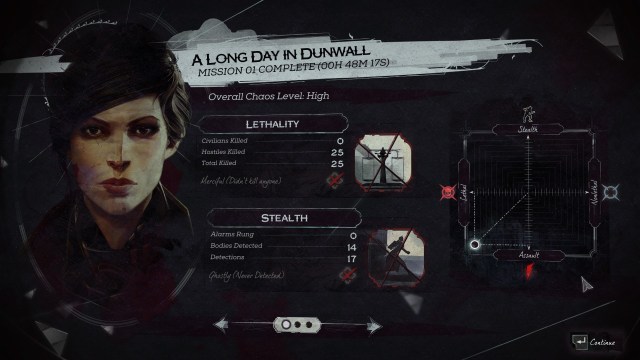 I have killed so many people.

It’s just an incontrovertible fact that I am very bad at stealth. I tried, but damn. In this game you can sneak up on people and choke them unconscious instead of killing them, which is nice, theoretically, but not especially effective if three other people see you do it. So at first I tried to be merciful but I kept getting spotted and then panicking and I’d just start swinging my sword around until everybody was dead. And even when I did occasionally manage to knock people out without getting caught, I got stressed out because what if they woke up again (apparently they DO NOT wake up again, but I still think this was a reasonable concern okay?)

So naturally once they were unconscious I would stab them just to be on the safe side. And then I chose a magic power that makes dead bodies disappear, which is actually a good thing because it’s less chaotic to not make everybody else upset about all the corpses I’ve left everywhere because I can’t stop murdering, but it also sort of incentivizes murdering even further because unconscious bodies don’t disappear so you’re often better off just murdering them. Out of sight out of mind. Almost reasonable. But THEN, I upgraded that power so that now whenever I murder somebody, instead of disappearing, their corpse turns into a swarm of bloodflies that murder EVEN MORE PEOPLE, which is, I think, the actual most chaotic thing I could possibly have done. 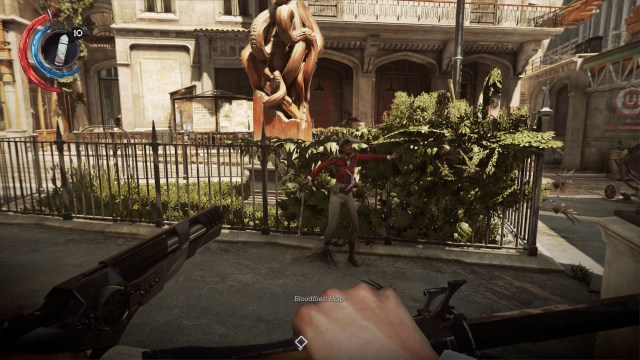 I murdered those flies into existence.

Also I’ve smashed almost every glass case I’ve seen because the noise is really satisfying. And I dropped explosive whale fat off a roof and onto a man and exploded him into the sea. And also I threw more explosive whale fat at an electrical panel to try to blow it up but it ricocheted back and hit me in the chest and exploded ME into the sea where I got attacked by piranhas (the water in this game is very pretty, by the way). And I think I may have recruited a serial killer to my cause. Like, I’m only a quarter of the way through the game but I think it might already be too late for me to turn my back on chaos.

Besides murdering people or even not murdering people, there’s also plenty of exploring to do. The first magic power you get allows you to jump long distances, which lets you stealthily hop between balconies and the tops of buildings instead of walking the streets all exposed like some kinda common dummy who forgot they had that skill for an entire mission and wound up having to murder every single guard in the city. You can sneak through windows and peek through keyholes, or you can just try smashing things until you find a way though. There’s all kinds of loot to collect, which I have somehow managed to miss at least half of despite being generally even more fastidious at looting than I am at mayhem. Like I feel like I must have stolen every possible thing and then at the end of the level it just taunts me with all of the stealing I didn’t manage to do. If you are a completionist, I wish you the best of luck.

Across the board it’s a pretty gorgeous game. It’s got a steampunk aesthetic, and the character design is stylized enough that it’s clearly not going for absolute realism. The result is consistent and lively and honestly a lot of fun to murder.

One critical note, the PC port of this game is not super stable. My computer can run basically anything on ultra but I am seeing some insane framerate drops at certain points regardless of what settings I use, and it seems like that’s a common issue. So at least for now you’re probably better of playing it on Ps4/XB1.

There’s no romance, I Googled it to be sure (my vetting process for games is basically “can I be a girl” and “can I be gay”), but the developer has said that basically Emily does what she wants and is in love with a person named Wyman who doesn’t appear in the game (they are only referenced in-game using they/them pronouns). So there’s at the very least no Straight Agenda. And right now I’m a girl fighting a girl arch-nemesis and my headquarters is a ship with a girl captain and a girl mad scientist and I feel real good about everything besides my chaos level and the fact that I think my next mission is to rescue a boy from a boy. But it’ll still be three to one and I think he’s an old grouch anyway so I guess he can stay (if I don’t murder him by accident or on purpose). And If everything goes according to plan, I’ll eventually get to murder a character voiced by Vincent D’onofrio, which is truly The American Dream. Then, in the DLC that has not been announced and will probably never exist, I will marry my non-binary dreamboat Wyman and hopefully convince a Rude Witch to join my chaotic girl gang in murder adventures on the high seas. I’ve got it all figured out.