This review will contain major spoilers of Season 3 of Apple TV+’s Dickinson. Gay spoilers, mostly, but all kinds are on the table.

I put off writing this as long as I could. Despite knowing it was the gayest season of the already-very-gay Dickinson, I stalled. Once I got to the halfway point of the season, I dug my heels in. I avoided watching, I procrastinated writing, I muted the hashtag and quickly scrolled past headlines. And it wasn’t because I don’t like this season; quite the opposite. I love this season. This season is everything I love about the show turned up to eleven. But I also knew it was the last, and I wasn’t ready to say goodbye.

But I knew it was time. I saw the comments on our weekly TV roundups, I saw the calls for it on Twitter. I knew it was time to say goodbye to Alena Smith‘s stroke of brilliance, to bid adieu to Ella Hunt’s Sue Gilbert, and to do the hardest thing of all: eulogize Hailee Steinfeld’s Emily Dickinson. 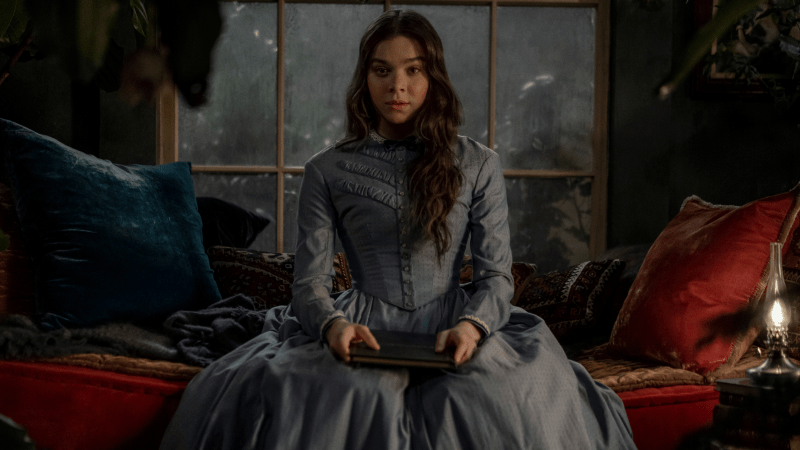 Me after realizing I was out of Dickinson episodes forever.

This show is unlike anything that’s ever existed. It might not be the first to do any one of the things it did best, but I think it was the first to combine them all. At least the first that combined them all so well. The period piece with modern vocabulary and music, the meta historical references and hidden pop culture jokes, the refusal to commit to one genre, the re-gaying of a famous figure that time tried to straighten out.

And that last thing was one of the things heightened in this final season. Where once it seemed it maybe Emily and Sue would have to live their lives in quiet longing, by the end of season two it was clear their magnetic pull to each other was too strong. And in season three they go through as much of an emotional dating arc as any queer couple on any show regardless of time period. 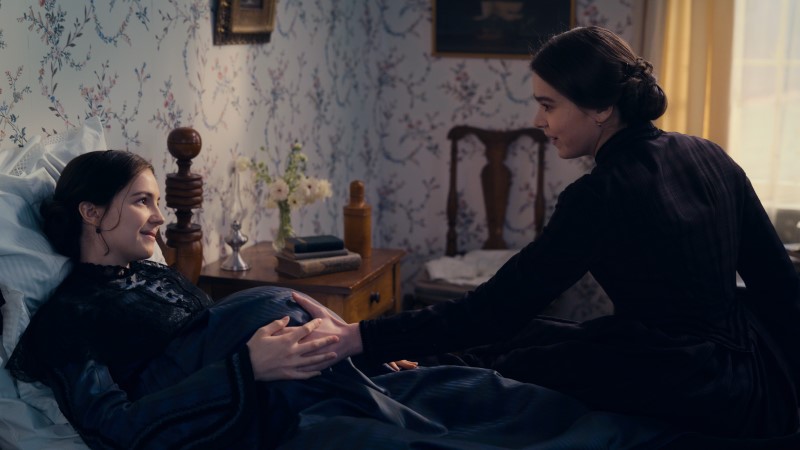 Granted, their story looked a bit different than most modern storylines.

Throughout this whole season, Emily promises to write Sue poems forever, and Sue keeps asking Emily to be with her, to be really with her, not through the filter of her poems. Sue keeps asking Emily to choose her, and Emily keeps thinking she is by writing her poems. They wish they could live properly together, to raise Sue’s baby son with two moms, but they know that’s impossible. So instead they’ll steal whatever moments they can. And steal they do.

Emily eventually realizes she’s hiding behind her words and shouts her love from Sue, literally and metaphorically. For example, one day she finds Sue crying and she looks her in the eye, no filters, no flowery rhymes, and tells Sue she loves her, and she wants to shower Sue with that love until she feels it in her bones, and that’s all Sue ever wanted. “You might be his wife,” Emily says to her sister-in law, “but I’m yours.”

It’s not all romps in the orchard and flower petal baths for Emily and Sue this season though, because when Sue finds out Emily is writing poems to someone else, making herself out to sound helpless and meek, she accuses Emily of running away from who she is. Emily tries to explain that she just wanted someone’s unbiased opinions of her writing, someone who can’t see that the words are written in the blood from her own heart. 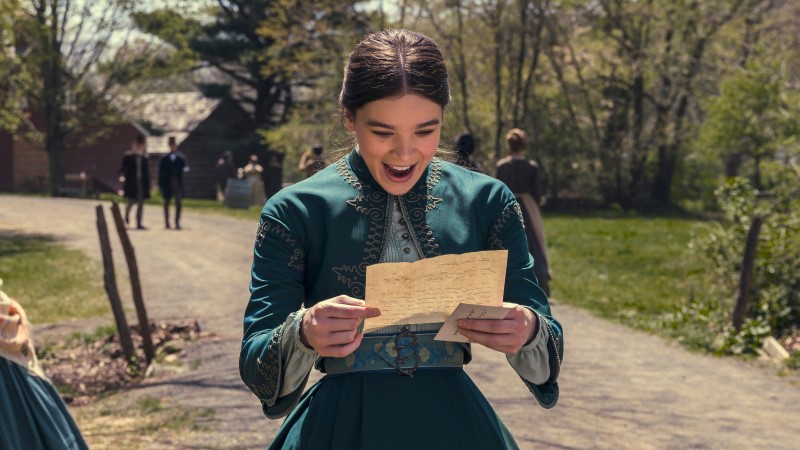 Me when someone comments something nice on my recaps or reviews.

Emily pulls away again, and says it’s not a good day for all these feelings (a relatable mood) but Sue reminds her there’s no day but today.

Emily is frustrated and tells her sister that she wishes she could just go to the future where maybe things wouldn’t be quite so hard, and because of this show’s aforementioned refusal to stick to a genre because rules are made to be broken, Emily and Lavinia do, indeed, go to the future. They find themselves in 1955, hilariously startled by cars, and oddly entranced by a strange and morbid poet who is a student at the all-female (!) Smith College and who loves the great American poet Emily Dickinson. Oh and this poet? Her name is Sylvia Plath. 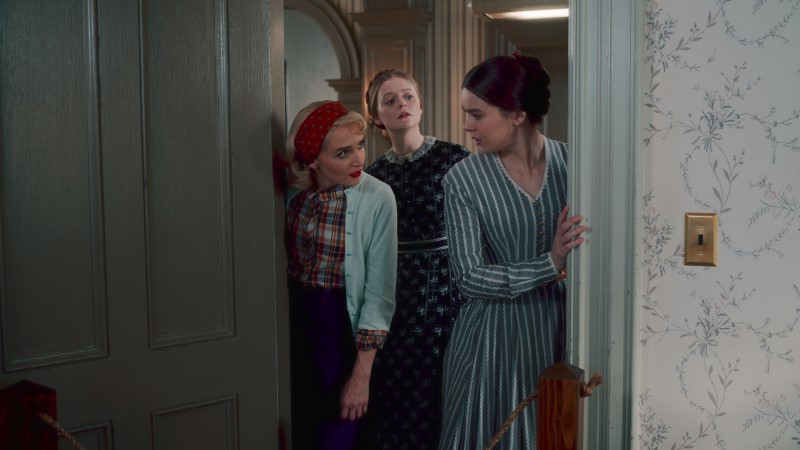 I cannot express how much I loved this entire sequence.

Sylvia Plath thinks that Emily and Lavinia are just really committed to their cosplay, and plays along, telling them about the poet’s legacy, and about the rumors that Emily Dickinson was a lesbian. Since the word “lesbian” wouldn’t be used the way we know it to be used for another decade or two, the girls are a bit confused, but when Sylvia explains it, Emily looks like she just heard her name for the first time.

Emily Dickinson tells Sylvia Plath that her energy is intense (yes I loved writing that, thank you for asking) and wishes she could go back to her own time period now. Because she had everything she needed all along; she had her imagination that could take her anywhere, and she had Sue. That’s all she needs.

Plus, saying it out loud to Lavinia wasn’t as scary as she thought it would be. She loves Sue, and she’s not afraid of that fact anymore.

And this epiphany carries over to other aspects of her life, her eyes finally open, once she blinked up from her little scraps of paper and looked around. She idolized her father, despite his old-fashioned views on women, especially as it pertains to the two things she was passionate about: writing and education. She convinced him to agree with her enough times that she thought he was evolving, thought he was growing with her, with the times. But it turns out he was just placating her, which comes into sharp focus for her when he asks her to write his will for him because Austin won’t speak to him anymore, something Emily is honored to do. Until he asks her to write Austin as the sole beneficiary, or his unnamed infant son in case of his death. Emily realizes he never even considered her, never even thought to question the standards, to push the status quo. Emily realizes her father has no imagination, and that she can’t hitch her wagon to him, because he was just a mossy statue memorializing a horse long dead. She needed to hitch her wagon to a horse of a different color.

That night her imagination takes her into the abyss, and she dreams of Sue in a tux, dancing with her, but it falls apart the way nightmares sometimes do. And she knows she can’t sit back any longer and dream. She understands now what Sue meant about loving her with more than words. She’s ready to be present. 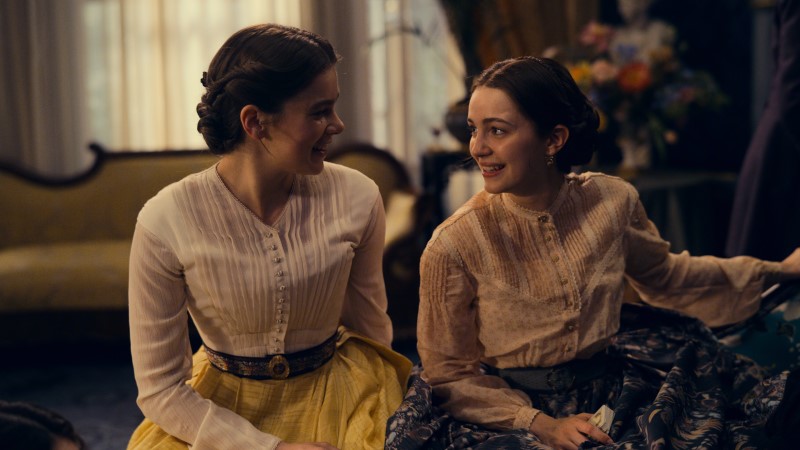 And present she is, and Emily and Sue share an intimate night together, and they become the poem, without wasting a drop of ink.

After the stunning montage of Emily and Sue caressing and kissing and loving on each other ends and the credits start to roll, Ivy by Taylor Swift plays, which made me laugh out loud for how correct and queer it is. “I’d live and die for moments that we stole, on begged and borrowed time. So tell me to run, or dare to sit and watch what we’ll become and drink my husband’s wine.” I did not yet have an Emisue playlist, but I do now, and so far it’s just “Split the Lark” and “Ivy.”

Before I get to the very end of the season, I wanted to touch on other moments I really enjoyed that weren’t especially gay but I love them anyway:

“Even if I can’t change the world, I’m still going to write. Even if no one ever cares. Even if it makes absolutely no difference that there was a person named Emily Dickinson who sat in this little room and wrote things down just because she felt them.”

And this is going to sound so naval gaze-y but I understand exactly how this feels. Sometimes it’s hard, putting hours of time and spools of emotion and, every once in a while, literal tears into a piece of writing and then you put it on the internet where it crosses the path of approximately 0.00009 of people for maybe three minutes of their time if you’re lucky, and then in a blink they’re on to the next thing, the next headline, the next tweet. Sometimes it almost feels pointless.

Would anyone even notice if I just…stopped? But the truth is, I’d notice. Words bubble up in me like lava in a volcano, and if I don’t get them out in one way or another, it feels like I might explode. I think that’s why I was so drawn to the energy of this portrayal of Emily Dickinson; her chaos, her imagination, the way writing was never a question, it was always a certainty. She embodies so many of the things I feel and think and believe, while also being so many things I hope to someday be. She is brave and she is bold and she is funny and messy and strong and she is just so very who she is all the time, unapologetically. 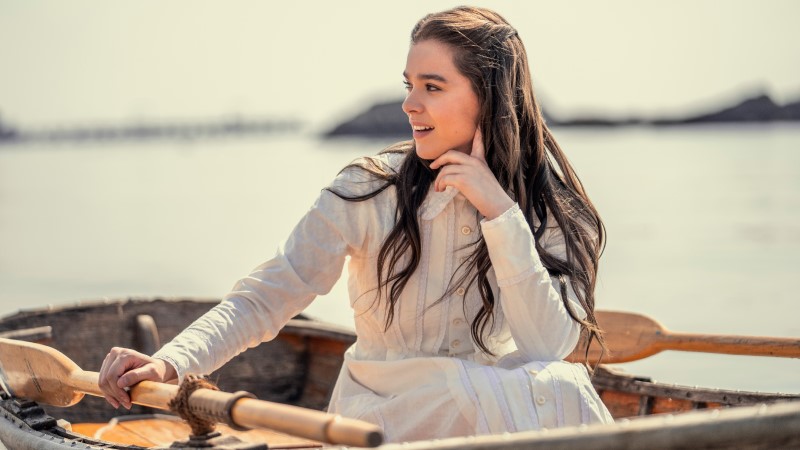 Watching Emily grow ever more still as the seasons went on, not in a scared or sad way, in a rooted and stable way was a wonder to behold.

So, like Emily Dickinson, even if I can’t change the world, I’m still going to write. Even if no one ever cares. Even if it makes absolutely no difference that there was a person named Valerie Anne who sat in this little room and wrote things down about TV shows just because she felt them.

And I’m probably going to rewatch Dickinson with regularity for the rest of my life.

Each that we lose takes part of us;
A crescent still abides,
Which like the moon, some turbid night,
Is summoned by the tides.