+ About a dozen activists disrupted Boston Pride by sitting at Boylston and Charles streets for 11 minutes — a minute for each trans person who has been murdered this year. The demonstration was held to refocus attention to those most marginalized in the LGBTQ community, honor the lives of trans women of color and raise awareness of the lack of representation and resources to queer people of color in Boston. The group’s specific goals for the Boston Pride officials was to add more trans, low-income, people of color to their board, reroute the parade to go through communities of color and to end partnerships with corporations who are hurting communities of color. They used #wickedpissed on social media to share their message. 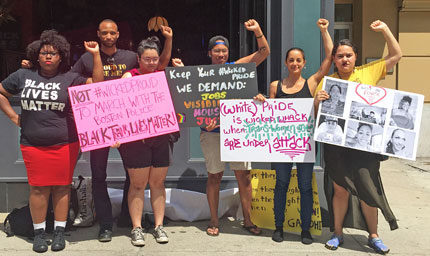 + Since it’s Pride month a bunch of businesses are capitalizing on it and making commercials and advertisements. Greek yogurt company Chobani isn’t any different. They released a new commercial featuring a lesbian couple in bed.

+ We’re rounding the corner here folks — by the end of the month, the Supreme Court will make a decision on gay marriage. A group led by anti-gay pastor Rick Scarborough vows to defy any ruling by SCOTUS that recognizes same-sex marriage. They’ve got a whole legion of homophobes — 44,500 signatures to be exact, including our faves Rick Santourm and Mike Huckabee. The group placed a full page ad in the Washington Post last week that said “We ask you not to force us to choose between the state and the Laws of God.”

+ Last week, three different complaints were filed against various establishments that discriminated against transgender people. Zack Ford over at ThinkProgress breaks it down for you and talks about the importance of nondiscrimination protections for LGBT people in housing, education, employment, etc.

+ On Monday, the Supreme Court declined to hear North Carolina’s case to revive its law requiring people seeking an abortion to listen to an ultrasound or to a doctor describe the fetus to them. The federal appeals court had found that North Carolina’s law violated the First Amendment rights of the doctor and patient.

+ Rachel Dolezal unapologetically resigned from her position at the the Spokane chapter of the NAACP on Monday. Dolezal, a white person, lied about being black for years and now is the center of a firestorm of criticism as of Friday when the story broke.

+ Chandra Bozelko over at The Guardian writes about her experiences with the emotional, physical and psychological effects of scarce pads and tampons in a women’s prison.

“The reasons for keeping supplies for women in prison limited are not purely financial. Even though keeping inmates clean would seem to be in the prison’s self-interest, prisons control their wards by keeping sanitation just out of reach. Stains on clothes seep into self-esteem and serve as an indelible reminder of one’s powerlessness in prison. Asking for something you need crystallizes the power differential between inmates and guards; the officer can either meet your need or he can refuse you, and there’s little you can do to influence his choice.”

+ Family and friends of a Milwaukee transgender woman who died by suicide in November say the bullying she faced at work and the subsequent inaction contributed to her death. Karis Anne Ross was a teacher at the German Immersion School and her parents say she endured bullying from her coworkers for 10 years while her complaints were ignored by administration. Ross specifically named people in her suicide letter who contributed to her pain. Her friend penned an open letter to the district’s superintendent pointing this out:

“As the spring semester draws to a close and another class prepares for graduation, I wish to call to your attention to an oversight, a failure to act, by Milwaukee Public School administrators, which undoubtedly contributed to the suicide death of one of Milwaukee Public Schools’ best and brightest teachers this past school year. While the blame for her death cannot be fully placed on the Milwaukee Public School District, it is my opinion that if key personnel had responded appropriately, this teacher may have chosen to continue living.”

+ A Washington Post and Kaiser Family Foundation survey found that while college students understand the importance of getting consent before sleeping with someone, they don’t agree on what consent means. College students were asked the meaning of “yes means yes” in regards to specific scenarios including undressing, getting a condom, or nodding. In each of the scenarios, 40 percent of students said the action constituted as consent for sex and 40 percent said they did not.