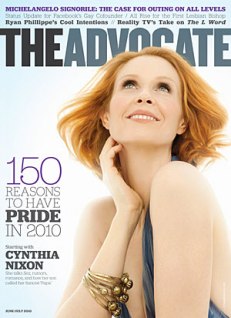 , talking about Sex and the City 2, gay parenting, her fight against breast cancer in 2006 and her relationship with her partner Christine Marnoni. In fact, much to our lesbionic delight, most of the article is about two of our most favorite things in the world:

Nixon met Marnoni in 2001 while campaigning to reduce public school class sizes in 2001, and they got closer in 2003 when Nixon was going through her split with her partner of 14 years, Danny Somebody. Kristin Davis remarked that though she knew Nixon & Marnoni were really good friends who worked together on important stuff, she didn’t suspect anything sexual going on:

“They’d be on the phone and writing speeches,” Davis says, “and I thought, She’s really into this [the schools campaign]!”

When Cynthia Nixon and Christine Marnoni became more and more than just friends, Nixon suddenly faced a lot of questions about her new relationship:

“Shortly after we started seeing each other—like a month after—we got a press inquiry about it,” Nixon says. “And I thought, This is crazy.”

Nixon hired a publicist who recommended that Nixon deny everything. Nixon, “more optimistic than Miranda ever was,” pushed the publicist for a plan beyond lies and hiding, as she didn’t really see how she could hide her TRUE! LESBIAN! LOVE! forevs! She asked her publicist:

‘That’s the whole thing? We never move past that? We’re at the playground with the kids, and pictures are taken of us, and we say, ‘No, she’s my friend?’ ”

Obvs Nixon eventually ditched that publicist and was ultimately introduced by her manager Emily Saines to openly gay publicist Kelly Bush, who recommended that Nixon just go ahead and confirm the rumors. 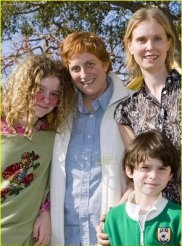 “And I was like, ‘Really, we can just confirm?’ So that’s what we did. It was so fantastic.”

As she’s said in the past, Nixon tells The Advocate that there was no grand lesbian revelation, nor does she feel it was something she’d hidden — or even felt — all her life. In fact :

“I identify as gay as a political stance,” she says. “If anybody, prior to my meeting and falling in love with Christine, had asked me about what I think about sexuality, I would have said I think we’re all bisexual. But I had that point of view without ever having felt attracted to a woman. I had never met a woman I was attracted to [before Christine]. And maybe if I’d met her when I was 20, I would have fallen in love and only dated women. But maybe if I’d met her at 20, I wouldn’t have responded at all. Who knows?

Nixon says Marinoni sealed the deal by being great with Nixon’s kids.

The Advocate writer points out that Marinoni is “clearly different than the women we’re used to seeing Nixon with. Marinoni dresses in men’s clothes. She looks butch. She’d clearly be the odd woman out at brunch with Miranda, Samantha, Charlotte, and Carrie.” Probs true, as Marinoni has never worn a bird as a hat, a headband as a skirt or a gigantic flower as a pair of pants.

Nixon on her attraction to Marinoni:

She also speaks about raising children with two mommies, her diagnosis with breast cancer in 2006, how she’s definitely “a Miranda” herself, and how Miranda’s character has evolved & changed over the years. There’s also some cute quotes from Charlotte I MEAN KRISTEN DAVIS. 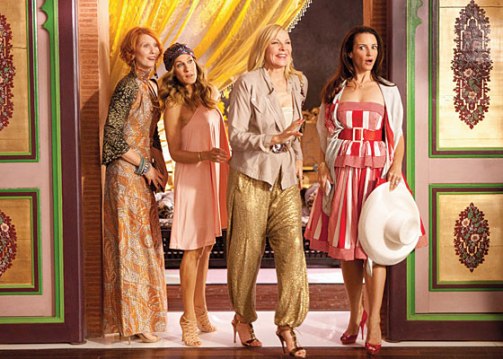 In conclusion, we love Cynthia Nixon, think it’s awesome what she’s doing for butch visibility with her wife and we will probs find SATC2 label-whored to the max but will go see it anyhow because our love knows no bounds, and also MC Hammer called for Samantha and wants his freaking pants back.

[Cynthia Nixon is More Than Just Sex: The Advocate] 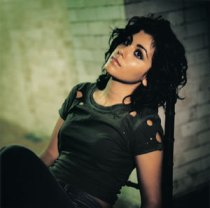 “We live in the 21st century – questions of sexuality are not outdated, but I don’t think the lines are very clear and they are not always clear to me. I can tell you that I’m single, which is not lovely, but it is what it is. I really don’t think whether you are gay or not is the whole identity of a person. It’s just one side; it doesn’t have to be the thing that defines you.”

True ‘dat Katie. Unfortunately it’s the one thing we’re required by gaylaw to be obsessed with. Katie Melua‘s 2003 album, Call Off the Search, went platinum in the UK in 2003 and her follow-up Piece by Piece did even better in 2005. Rumors that she was dating openly lesbian photographer Lara Bloom in 2006 were never confirmed and are therefore probs not true, but here’s a photo anyhow, ’cause we think they have cool hair: 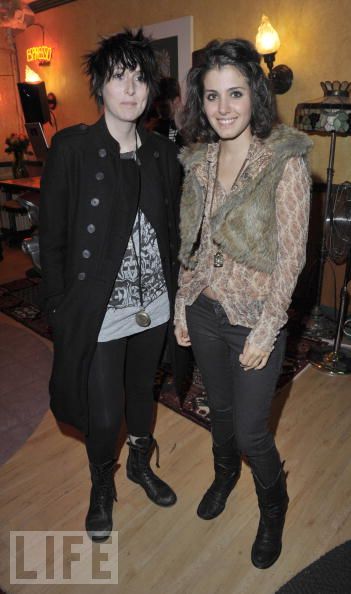 Her new album, The House, comes out soon and might offer a bit more insight, like the lyrics from this track, “Moment of Madness”:

When we drank too much beer
Lost our fear
Our defenses were down
You got up, tried your luck…

I saw your thighs
And I fell to my knees
Oh my god what is this?
It’s a moment of madness.

I just want to stare at your hair
And imagine you open your door
In your drawer
There’s some leather in there.
I refuse / You persist / It’s a moment of madness.

We’ve done an informal Autostraddle Bisexual Roundtable on this topic and determined there’s really not much to say about a man’s thighs, even if you do enjoy being penetrated by what’s between them. Amirite bisexual/straight ladies? Holler.

Julie Goldman is featured on the cover of South Florida’s longest running lesbian magazine SHE, talking about The Big Gay Sketch Show, things that make her laugh, The Nicest Thing, and of course Julie & Brandy in Your Box Office:

...I want to say the things no one else will. I think my style is on the “masculine” side and I’m proud to be out there representing the “lady gentlemen,” while being totally un-P.C. and irreverent.
—Julie Goldman

You can read the interview online in the SHE digital edition!

GUESS WHAT TIME IT IS DARIA TIME! The DVD set of 53 shows is released tomorrow (but you can pre-order now) apparently “still delights” and is “filled with extras.” (@tmc) Also, Bitch Magazine’s blogger tackles this monumental occassion in depth.

WRITTEN ON THE BODY:

Wanna lez out to Written on the Body? Young Creature has a mix tape for that. (@youngcreature) 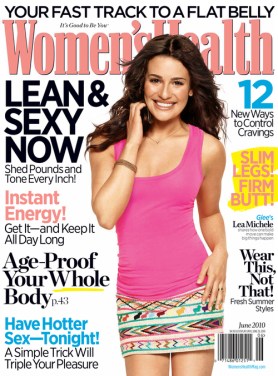 Glee’s Lea Michele is on the cover of Women’s Health, wearing what appears to be a table runner stolen from Chi-Chi’s as a mini-skirt. In the article she talks about what she eats, and climbing walls, and how much fun everyone has being in GLEE. (@ontd)

Queer Sighted has six summer 2010 flicks qualified as ‘gay’ or ‘gay-ish’ for ‘ya. (@queersighted)

“Family Guy, the enormously successful equal opportunity offender, on Mother’s Day aired the episode “Quagmire’s Dad,” about Quagmire’s father who was supposed to be a panty chaser, but turns to be a big homo — or rather, a transgender MTF. Lots of gay and trans jokes have the queers upset!” (@queerty)