Four days ago there were unsettling rumors that the Department of Justice might appeal the courts’ injunction of DADT – basically, deliberately allow discharges to continue until the Pentagon completes its full “review process” around repeal of DADT. Now it appears that those rumors were completely, horribly true! A federal appeals court in California has ordered the military to continue the policy for now, apparently a direct request from the Obama administration.

What kind of sense does this make? As Grace wrote on Wednesday, “many people might think that a Congress- and Pentagon-supported repeal of DADT has greater legitimacy than a court-ordered injunction, especially when the court ordering the injunction is not the Supreme Court, but the liberal Ninth Circuit…”  The court had a slightly different and more mysterious explanation: 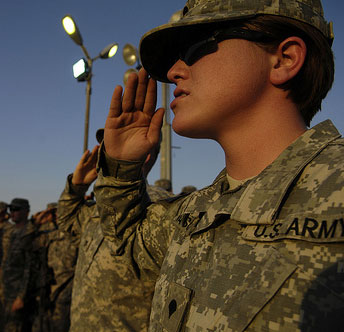 In its three-page ruling, the U.S. 9th Circuit Court of Appeals said the ruling was based on new information provided by the federal government, including a declaration from Major General Steven A. Hummer, who is leading the effort to repeal the policy.

“In order to provide this court with an opportunity to consider fully the issues presented in the light of these previously undisclosed facts,” the court wrote, that it would uphold an earlier order to keep the policy in place.

What is that new information? So far no one seems to know. NPR reports that “The Department of Justice said in a statement that it asked the court to reconsider its order “to avoid short-circuiting the repeal process established by Congress during the final stages of the implementation of the repeal,” which wouldn’t be new information at all – John McCain and the Pentagon have been insisting since day one of even considering a repeal process that without a full “review” and opportunity for every senior military leader to weigh in, and also a full 60-day waiting period after that point, a repeal would be a reckless idea.

Since it seems likely that the repeal will happen anyway, albeit maybe with a slight delay, this move comes off as childish at best, and deeply frustrating to currently enlisted gay soldiers and those who support them. It could be read as a bid by Obama to prove he can compromise on controversial issues in an election year; it could be read as pure bureaucratic nonsense. No matter how it’s read, though, the actual intended effect of the bill seems unclear. The Associated Press says that “…The military’s “don’t ask, don’t tell” policy is back in place for the time being, with one major caveat: the government is not allowed to investigate, penalize or discharge anyone who is openly gay.” So… what’s different?

There doesn’t seem to be an explanation of that either – if the reported statement is true, then the appeal of the injunction seems like more of an insult than any actual attempt at changing or maintaining policy. But maybe there’s something lost in translation there as well – in its statement on the issue, the Justice Departement claimed that “the Defense Department has discharged only one service member since Congress voted to repeal the policy, and that was done at the request of the service member,” making the case that this won’t harm servicemembers one way or the other. But that’s not what was being said only a few weeks ago, when the Service Members Legal Defense Network spoke out on behalf of the soldiers they represented, at least one of whom they claimed was being discharged against their will:

…Unfortunately, SLDN has a client right now who was recently recommended for discharge at a board hearing, and his paperwork is headed to the Navy Secretary. He made no statement, and he wants to continue serving. We have another client who is having a board hearing later this week, and if this senior enlisted person is recommended for discharge, her paperwork will likely be before the Navy Secretary in short order. She, too, wishes to continue serving. Let me be clear. At SLDN, we have scores of clients who have been advised they are under DADT investigations. Some of these clients have between 10 and 15 years of honorable service, few made voluntary statements, and none to my knowledge has asked to be ‘separated expeditiously.’ 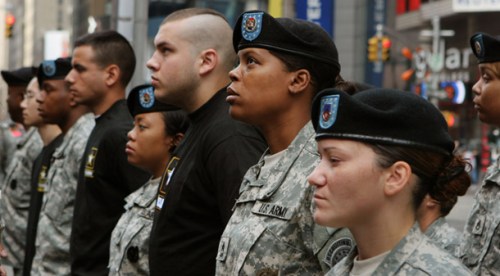 It’s a messy situation, and the things that should be becoming clearer as time goes on and a post-repeal military approaches are becoming more impenetrable. Based on the information released about this injunction appeal, it’s not easy at all to determine what any gay soldier’s status in the military actually is right now – is there threat of a discharge, or no? If so, for how long? These are people’s careers on the line. And on top of that are the mounting questions about how exactly things will work after the repeal — the Pentagon is reportedly still studying the issue of whether any benefits can now be extended to same-sex couples, and definitively says there will be “no change” to major benefits like healthcare or housing for same-sex couples. It could be argued that this is what a ten-month review process is for. But then it would have to be asked: The (fairly major) issue of benefits is still undecided, and at this point repeal is slated for the fall (it was originally scheduled for mid-summer). What were the last ten months spent doing? And more to the point, what does appealing this injunction do to help that process?

The Log Cabin Republicans, the group whose lawsuit brought us to the point of progress we’re at now, have maybe said it best in their statement: “The Log Cabin Republicans asked the court Friday to deny the motion, saying “an on-again, off-again status of the District Court’s injunction benefits no one and plays havoc with the constitutional rights of American service members.” It is indeed, and for the sake of our servicemembers, it needs to end soon.