Two days after I submitted my last Autostraddle column, I got a concussion in the final rugby scrimmage of the season. I was running to tackle someone on the other team, but she passed the ball before I had the chance to, which meant that I wasn’t allowed to tackle her anymore. I was too close to her to stop, though, and I hadn’t started to go in low to tackle her yet, so my cheek collided into her head. Summary: I’m a klutz. The athletic doctor didn’t think I had a concussion at first but, after my dizziness and headache hadn’t gone away two days later, it was pretty obvious that I did. I spent the next week and a half not doing any homework and sleeping a lot–I was awake for a grand total of seven hours on Thanksgiving. Perhaps I should be slightly less excited about rugby now that I know what a concussion feels like, but I really miss being with my team, and I even kind of miss the running. I can’t wait to get back to practicing and playing after winter break.

One of the most exciting things that’s happened to me this month is that I got a heller! For non-Bryn Mawr people, Hell Week is a tradition where, during a week in February, each freshman is “helled” by a sophomore or sophomores of their choice. As I understand it, the sophomore hellers make the freshman hellees do crazy but fun things throughout the week, like saying weird things in class or dressing up. It’s a really great way to form closer friendships, and freshman don’t have to do anything they’re not comfortable with, so it’s a safe environment. Before Hell Week, each freshman has to ask a sophomore or sophomores to be their heller. It’s a pretty big deal — freshmen spend a lot of time thinking about who they want to ask, and then come up with elaborate ways to ask them.

I decided to ask Alisha, a sophomore in my physics class, to be my heller. Alisha likes physics and moose, so I knew I needed to include those two things in my hell proposal to her. In preparation for the proposal, I looked up physics equations that contained the letters in “Alisha, Hell me? Love Kelsey”, and then I wrote out the equations vertically with blank spaces for the letters in the message. I also printed out a bunch of cartoon moose pictures. I asked a mutual friend of ours to bring Alisha back to her room after their class together. While Alisha was at class, I decorated her door with the physics equation sign and the moose pictures. Then I hid in the bathroom across the hall and waited. 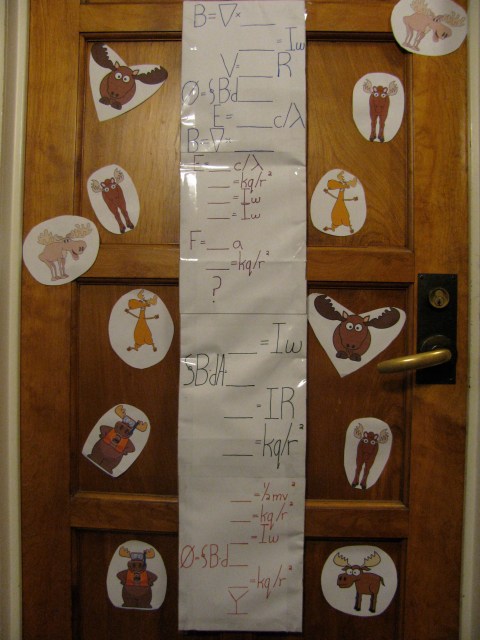 When Alisha came back to her room, she was instantly excited, but she wasn’t sure why her door was decorated or who did it. It took her a few minutes to figure out the message and, once she did, I came out of the bathroom and said surprise! We were both really happy, and it’s awesome to be a part of such a great Bryn Mawr tradition and to have a hell family. My grand-heller (Alisha’s heller) is abroad in Japan, and I met my great-grand heller (Alisha’s heller’s heller) today! I also have a hell-sister, another freshman who asked Alisha to be her heller. She’s one of my friends and is in the same physics class as Alisha and I. I am ridiculously excited for Hell Week, and I can’t wait to tell you all as much about it as I’m allowed to once it happens! 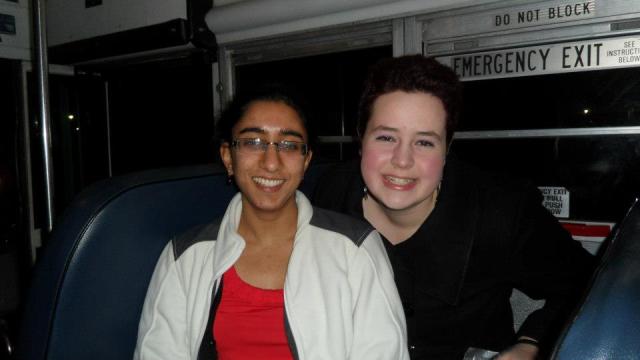 Alisha and I on the bus to Swarthmore College’s Yule Ball!

Now, I’m counting down the days until I get to go home for winter break — I leave Tuesday morning. The only work I have left is an Arabic skit and an essay revision, and it’s finally sinking in that my first semester of college is actually over. I’m really excited to see my family and friends at home, but I’ll really miss everyone here. I suspect that being home for almost five weeks will be a huge change, but I’ll let you know how it goes in my next column! 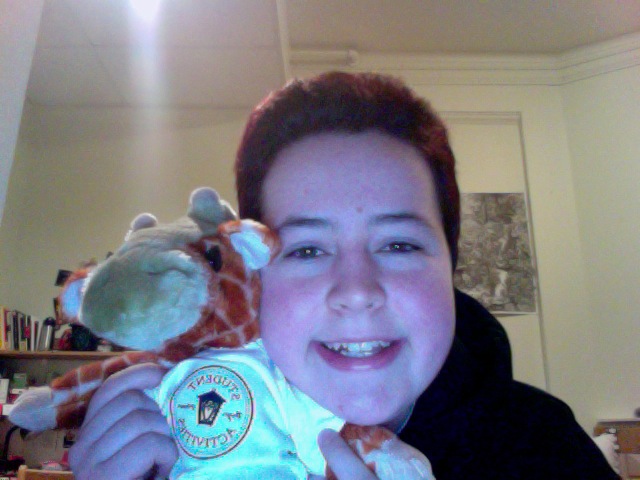 Bryn Mawr had a free Build a Bear event in the Campus Center. This is me with the stuffed giraffe I made, named Hank! My roommate and I have matching giraffes and it’s really cute.

I keep seeing Facebook statuses from high school friends about being back in Phoenix, eating homemade meals, and cuddling with family pets. I’m still on campus, eating dining hall food, and cuddling with my girlfriend. At Wellesley, finals period doesn’t end until December twenty-first, and I’m staying until the last day. As much as I love this place, and these people, I’m excited to get to go home for the holidays. 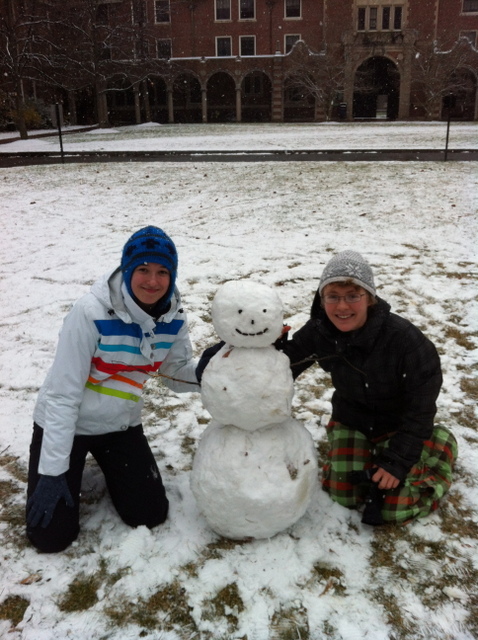 Café Hoop is long and skinny, with cozy spots for sitting in the front and back, and the kitchen/counter in the middle. The walls are a mess of brightly colored painting, witty graffiti by students, and the signatures of visiting queer performers like Andrea Gibson. 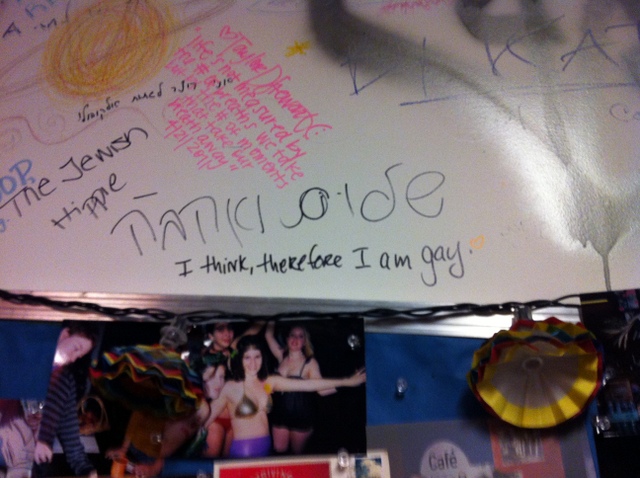 For Queer Open Mic night, my friends and I arrived early and snagged the stiff-backed wooden chairs near front. People poured in, filling the room far past capacity. Looking around, I recognized most of the people in the crowd. One of the first friends I made at Wellesley was the MC, and one of my other close friends was performing a poem that ze had written. Most of the other performers were also familiar faces. Eight months ago I sat in the same spot and saw a crowd of strangers. Cute strangers, with cool hair and adorable partners, but strangers nonetheless. I met some of the people that I still am friends with at the Queer Open Mic that happened in April, during a weekend for admitted students. This Queer Open Mic, I got to appreciate just how ridiculously talented my friends are.

We had a few hours to waste between Queer Open Mic and Queer Pub Night, so we played Bananagrams in the Hoop at one of the booths in the back corner. I’m not really sure if Queer Pub night was actually any gayer than regular Pub nights. I’m at the Pub pretty much every Thursday to dance my academic frustrations away, and the regular crowd is pretty queer. Most of the couples on the dance floor are Wellesley students. The only things that really made Queer Pub night queer were the rainbow shirts that House Council was selling and the skittles in bowls on the bar. Regardless, I was happy for the candy and more than happy to sing along to every Spice Girls and Britney Spears song that played.

Reading period just ended, and finals week is upon us. I haven’t done a whole lot of studying yet, but I have watched eight movies. My girlfriend and I hosted a Lord of the Rings marathon the second day of Reading Period. We started at 11 a.m., and finished at midnight. The experience was emotionally cleansing. After thirteen hours of philosophical musings intertwined with a healthy dose of violence, I had run through every emotion I was capable of feeling and was at peace with the world.

After peeling ourselves off the sofa, six of us bundled up, walked down to the boardwalk by the lake, created a massive cuddle puddle of blankets, and watched the meteor shower for an hour. Our spot was perfect: it was dark enough to get a great show, yet close enough to campus to not be absolutely terrifying at one in the morning. We saw probably twenty or thirty meteors before heading back inside for the night. 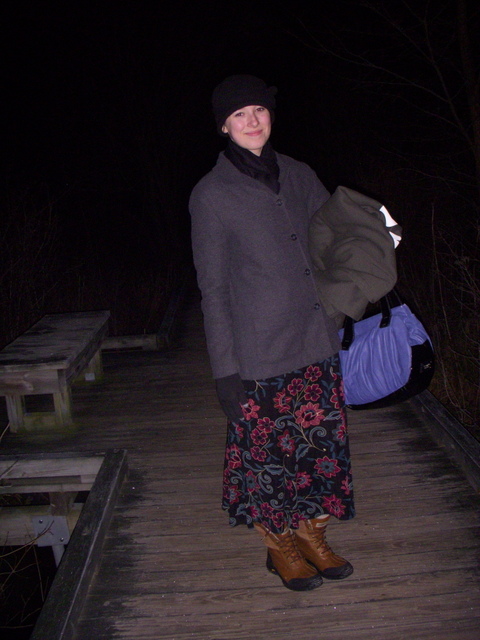 The next morning my girlfriend and I woke up ridiculously early to go see The Hobbit in 3D, obviously. 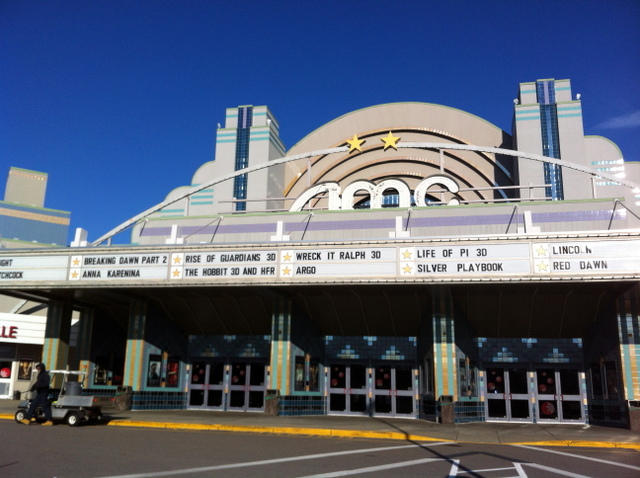 I geeked out for the majority of the film. The CGI is so good! The music is also epic, and it’s fast paced, despite covering only one third of the book. I wish I could say that afterwards I sat down and did serious amounts of studying, but I didn’t. That was yesterday. Today, I got a decent amount of work done, but I don’t know if I’m on track to take a self-scheduled final in two days like I had planned. I need to study, but I just don’t know how to motivate myself to do work. Here’s to hoping I can be really, really productive in the next few days.