“Click” can best be defined as the moment you became conscious of the personal being political, the moment you learned a social fact through a deeply personal interaction. Your “click” moves you from an individual experience to a collective empiricism. It connotes the precise instant that everything changed; forever.

Yet for me, my click was a bit longer and slower than that. It was a pastiche of revelations and experiences – both good and bad – that enhanced my feminism. You see, that’s another part of this: the story I’m going to tell begins with me already being a feminist, but ends with me making peace with being a woman. To me, this is vital to a feminist consciousness among women. In my own case, I learned this through video gaming.

Being a transgender woman means one has a “special” relationship with gender and with womanhood in particular. For many of us, part of our self-discovery necessarily involves a dawning of pride and acceptance of one’s own gender. I grew up socialised to believe that femininity and womanhood were inferior and should be either avoided or pitied. As a young trans girl trying to find her place in this gendered world, this was a mirrored feedback loop that fed a dramatic self hate: I hated what I feared I was, and hated myself for wanting it. I feared that to be both a woman and trans was to consign myself to being permanently unlovable.

I came out as a feminist when I was 15 because my father’s depredations in the household — with my mother as a long-suffering housewife who endured years of psychological abuse — put the lie to the notion that sexism was a thing of the past; but that did not click away my own self-loathing and fears about accepting my gender.

What finally did that was video gaming and roleplaying. As I suffered through severe depression and suicidal ideation, I discovered roleplaying games to be a wonderful oasis that enabled me to live as someone more closely approximating what I would choose. Through heroines like Bastila Shan, or the ones I created from the ground up in Elder Scrolls: Morrowind, I gained secret role models who gave me hints of the kind of woman I’d like to be. 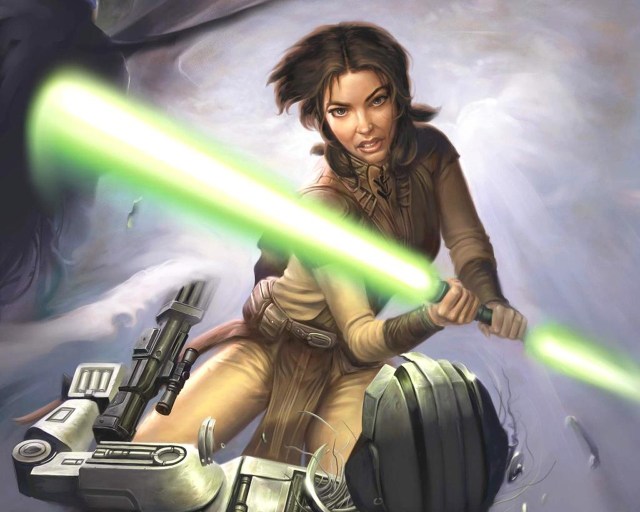 Single player games provided me with visions of female power. Women with swords, spells, lightsabers, martial skills, elegance, high education, class, guts, skill, and who – above all – showed no shame in who they were. If these fictional characters could do it, so could I. But since I was still being forced to live as a boy, where could I possibly begin?

The psychology of trans girlhood is a curious, liminal space existing somewhere between the generalities of cis girl and boyhood. But it’s also remarkably internal, shivering beneath a shell of deeply, unwillingly affected gender, preventing social interaction (for good or ill) as—in my case—a woman. As I grew up, I felt feminine self-loathing, the acute threat of men’s power and privilege and strangely vulnerable when I was around powerful men engaged in rape apologism. And for all that fear and loathing, I could not claim womanhood with any pride or confidence; I tried to shrink ever deeper into that torturous iron maiden of a shell.

Strangely enough, it was playing World of Warcraft where I learned how to be a proud woman in the midst of a patriarchal society, and where my transgender transition would properly begin in earnest.

As I wrote in a recent paper for Women’s Studies Quarterly “To be quite sure, this was not a possibility that was bullet-pointed as a selling point on the back of World of Warcraft’s packaging. ‘Uncover your transgender identity!’ is scarcely marketed as a feature of online games of any stripe; yet it happened.” The game provided me with two things: first, a space where I could enter a social world as a woman unapologetically, in the form of my avatar and her roleplay backstory; second, an experimental virtual world where I could practise resisting patriarchy from the subjectivity of a strong, proud woman, and not merely someone shivering in the shell of a coercively-assigned gender.

I confronted the realities of stalking, harassment and male sexual entitlement openly for the first time. It made gaming difficult, but it also showed me that if I stopped hiding and pretending I wasn’t a woman, I actually did have the strength to withstand this fusillade of machismo. In so doing, it taught me empowerment; what Virginia Woolf memorably called the “habit of freedom.” I also made lasting friends there, explored my sexuality there, and when it came to the harassment? I learned to fight it.

In that world I was “Quinnae” and “she/her” to everyone, and I quickly became known on the forums for prosaic tongue lashings and verbal self-defence par excellence. I found shelter in communities of fellow women gamers, people to commiserate and laugh with. All of these people existed as avatars and text on a screen, yet they saved my life.

It showed an illumined path to accepting my womanhood in the real world. Each click on the keyboard brought me one step closer to loving myself.

The game offered me the opportunity to stand in the shoes of a woman character I had created, a thoughtful, strong woman modeled after my newfound role models and representing a potential vision of myself. The scholarly Night Elven Priestess who became my main character in WoW was how I explored womanhood, became a woman and learned to take pride in being a woman. She taught me how to stand up for myself, how to fight back and eventually how to take control of my life.

This ‘click,’ as it were, took roughly a year and a half to run its course. But when it did, I was ready to accept this was no longer a cute, long eared fantasy: this could be real. The habit of freedom now churned with its mighty pistons, the old shameful shell rattling and cracking as it did so. Anger from being lied to about womanhood, rage at having it suppressed, fury at having sacrificed 20 years of my life on the altar of patriarchal essentialism all came pouring in. But beautiful emotions as well: a profound sense of self-love and hope, the realisation that I could emerge from the cave of gaming addiction and make Quinnae’s hyperactive self-actualisation into a livable life for the real me. For Katherine.

I was starting a new game. And this time I would be in control.

About the author: Katherine Cross is a research assistant in Hunter College’s sociology department and is preparing doctoral research on gender identity formation in virtual worlds. A radical feminist and author, her writing credits include Women’s Studies Quarterly, Feministing, Kotaku, The Occupied Times of London, Questioning Transphobia, and the Border House, where she is co-editor.

Katherine has written 1 article for us.