A few months ago, social scientist W. Bradford Wilcox wrote in Slate that it’s disadvantageous to be raised in a single-parent family. He cited numerous studies and statistics that apparently showed that as a girl raised by a single mom, you’re more likely to end up a pregnant teen, and as a boy, you’re more likely to end up in jail. As the research he quoted shows, the idea that you’re at a supreme disadvantage if raised by a single parent (and let’s face it: most single parents are women) is nothing new. In response to this dominant you’re-fucked-if-you-don’t-have-a-dad narrative, Slate has launched a column in which readers are invited to contribute articles on why being raised by a single parent is just as good, or even better, than being raised by two parents.

Since much of the criticism of same-sex marriage and adoption rights focus on the idea that children need a father to thrive, the latest installment of the column, an article which focuses on the confidence and independence gained in a female-headed household, is relevant to our interests. Pamela Gwyn Kripke writes that her daughters, having grown up watching her accomplish everything from saving money to fixing the sink on her own, know that they are capable of doing difficult things regardless of gender. 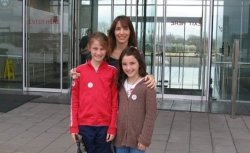 Kripke and her daughters via Slate

“Growing up in a house of girls, they’ve learned about independence, about teamwork, about climbing on ladders and lifting couches and fixing (OK, attempting to fix) leaky shower faucets. We have a tool box. We have a grill. (We also have a plumber if we need him.) Looking at the gear in my car trunk, a mechanic once asked if I was a gym teacher. Female strength is worth nurturing, and it just happens organically in an all-gal house.”

Kripke and her daughters would probably be able to relate to to the conclusions drawn from the Williams Institute study “Adolescents with Lesbian Mothers Describe their Own Lives,” which has followed 78 teens over a 26-year period and found that the children raised by two women are just as happy and successful, if not more-so, than their peers raised with fathers around. Nanette Gartrell, the principal investigator of the study, reports that “at the end of high school, the teens tell us that they have excellent grades, feel connected to their family and friends, and admire their parents.” Furthermore, they see themselves as open-minded, thanks in part to growing up in non-traditional families.

Opponents often argue that children who grow up in single parent or same-sex couple headed households suffer because they lack adequate gender socialization. But in Autostraddle’s “Are Male Role Models Necessary?” Riese shows that this type of thinking is based on the false assumption that these children don’t interact with a variety of role models – old and young, male and female, as they grow up. As she puts it, children raised by women
“managed to socialize and form bonds with other male human beings throughout their fascinating lives on this diverse special planet.”

And the whole obsession with so-called proper gender socialization is problematic. As Riese writes,

“Gender socialization is one of many elements of family life we’ve been bred to see as “essential” when in truth, gender socialization in and of itself has never met the needs of the individual, only the larger system which benefits those already in power.”

Focusing on the number or gender of individuals raising children distracts us from the reality that patriarchal power structures and unequal social institutions are what really make things disadvantageous for children, so how about we focus on that, and not if Heather has two mommies, or daddies, or a mommy and a daddy.