Jazz has been in national spotlight for a while. She’s an incredibly bright, bubbly and brave fourteen-year-old girl who came out as trans and started transitioning before she was even in kindergarten. Since then, she’s been just about everywhere, including the GLAAD Awards, her own documentary that aired on OWN, 20/20 being interviewed by Barbara Walters,  the Advocate’s “Top 40 Under 40” list and even recently Time Magazine’s “25 Most Influential Teens of 2014.” 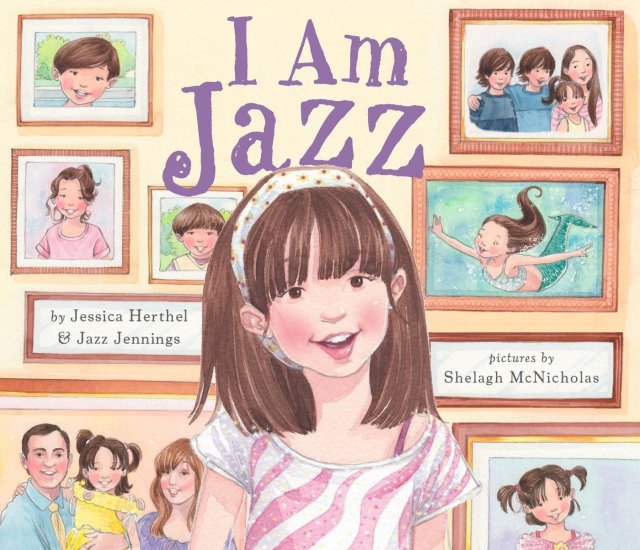 I Am Jazz art by Shelagh McNicholas

Jazz’s latest move is to help write and publish a children’s book about her life. She hopes that this book, titled I Am Jazz, which shows her early journey, including her diagnosis with gender dysphoria, her struggles at school and eventually her being able to grow into the person she is today, will help other trans kids, and just any kids who feel different, who are looking for someone who is like them.

I wrote this book so we could help educate other transgender youth and families that it is OK to be different. It’s not just geared to LGBTQ people, but for everyone who is unique. And hopefully it can make a huge impact in letting everyone know that they have to accept each other because we’re all part of the same society.

Jazz recently sat down with Katie Couric to talk about her book and what it’s like being an influential trans teen in America. She and her mother want to get the message out that it’s okay to be yourself, no matter what other people say. I Am Jazz, which was released in September, was co-written by Jazz and Jessica Herthel and features illustrations by Shelagh McNicholas. All the proceeds go to the TransKids Purple Rainbow Foundation to help trans youth.

Another trans teen who’s stepping into the spotlight is thirteen-year-old Zoey, who appeared in the recent LOGO and MTV documentary Laverne Cox Presents: The T-Word. In the documentary she talked about how her mom helped her deal with bullying that not only came from other students after she transitioned at school, but from the school officials as well. Her scenes were some of the most inspirational and optimistic in the special.

Jazz and Zoey even appeared together during the Laverne Cox Presents: The T-Word post-show when Zoey and her mother Ofelia were talking about how to deal with bullying as a trans youth. Ofelia is an incredibly supportive mother, and seeing the two of them there standing together sent a powerful message. Zoey even says that “the biggest personal achievement was when my mom was like, ‘What do you need? What is it that we need to do to make you happy?’ I felt like my mom was there to love me and accept me,” instead of being resistant to having a trans daughter.

After Zoey and her mother showed just how amazing a supportive family is to trans kids, Jazz stood up in the audience and answered questions about transitioning at an early age from Su-Chin Pak. Jazz’s mother is also super supportive, and Laverne Cox pointed out just how important that is to being able to transition young.

These kids are showing just how brave they are by going into the national spotlight and discussing these issues. Jazz doesn’t have to speak in public and didn’t have to write a book about her life. Zoey didn’t have to go on national TV and tell her story in front of millions of viewers. But they did, and they continue to spread their messages of being able to be yourself and accepting others for who they are. They continue to stand up for trans rights and give trans kids a place where they can look and see themselves. The future of the trans movement is definitely bright as long as we have amazing trans kids like them.