As millions of people lined busy streets in gayborhoods across the world for Pride weekend, 1.7 billion people began celebrating Eid al-Fitr  —  where after a long hot month of fasting from dawn to sunset Muslims throw a three-day party (in some places it lasts over ten) celebrating community, good food and impeccable outfits. As two holidays intersected and Queer Muslims began celebrating life at the intersection, a new holiday was born: PrEIDe.

What is PrEIDe? A portmanteau of Pride + Eid, PrEIDe is a celebration of LGBTQ Muslim identity.
It began with a simple idea: Our holidays are colliding! Maybe we should celebrate being Queer and Muslim together. Coming off of an entire month of Ramadan programming for LGBTQ Muslim youth, it seemed like a perfect opportunity to close out the month. I took the topic to twitter: 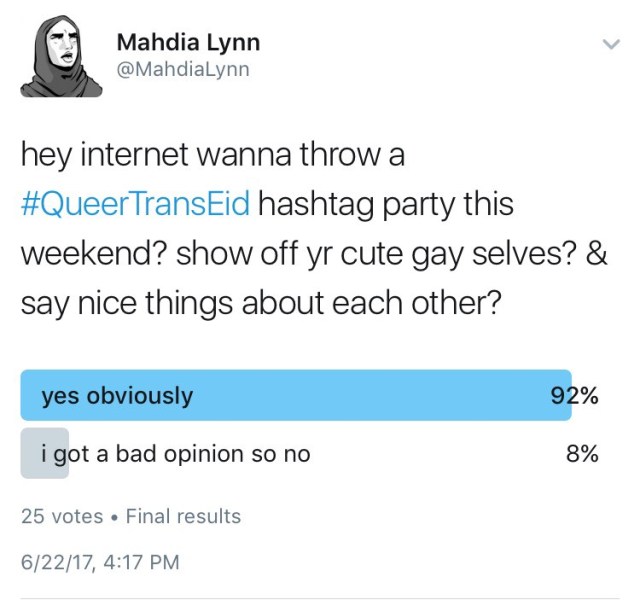 Breaking news: 8% of people on the internet have Bad Opinions.

By the time the weekend came around, the internet collectively settled on the hashtag #PrEIDe. It was short, to the point, and relied on punny wordplay— the perfect storm for a hashtag party with beautiful gay selfies and supportive affirmations. 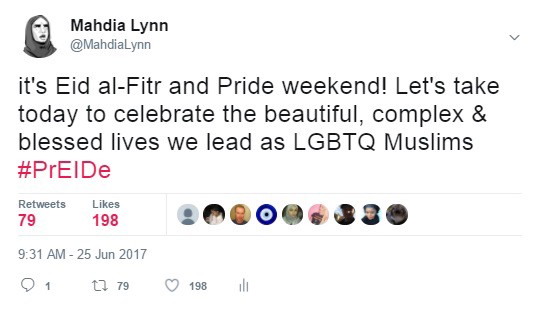 So began several days of Queer Muslim Joy. Here is a profile on some of the beautiful queers coming together on social media for the first-ever PrEIDe celebration. 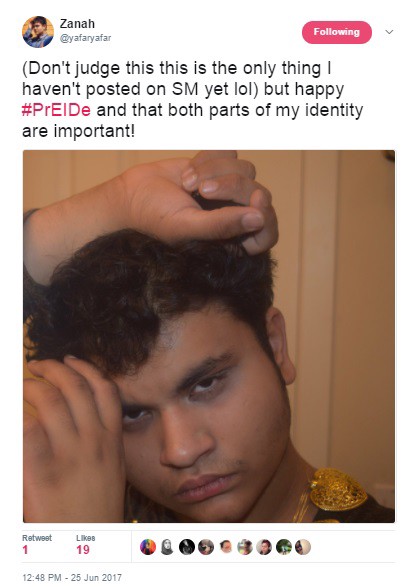 Image used with permission from Zanah

For me PrEIDe means visibility. It means that people know we exist and that we are part of the Ummah. Pride, in a very multi-layered way is a show of visibility. Because having Queer Voices silenced has lead to the mass destruction of Queer people in the world. When Queer people are silenced they are allowed to be killed because “they never existed in the first place.”

Likewise, Eid is the celebration of the end of Ramadan but in a much deeper way The celebration of being Muslim and being part of the Ummah, and the happiness and joy of being Muslim. Eid is a day in which the tenacity of the Muslim soul through bouts of hunger, thirst and suppression of instincts (over Ramadan) is celebrated and our Ibadat and love for Allah is as well.

PrEIDe combines these two aspects. It shows that people can be Queer and devout Muslim. It shows that people have been Queer and Muslim and neither parts of our identity are negotiable for change. That living as a Queer person does not make you “jahil” nor does it make you the people of Sodom and Gomorrah. It both showcases visibility and the concept of Ummah ; of an oppressed community that expresses tenacity and spirituality. 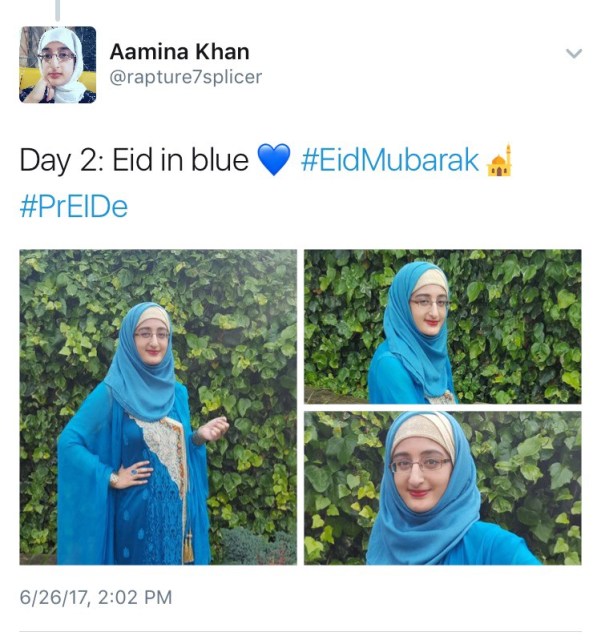 Used with permission from Amina Khan

Blair Imani, Black Queer American Muslim Activist and founder of Equality for HER 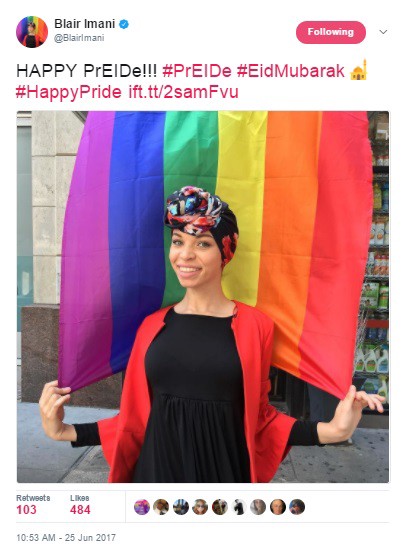 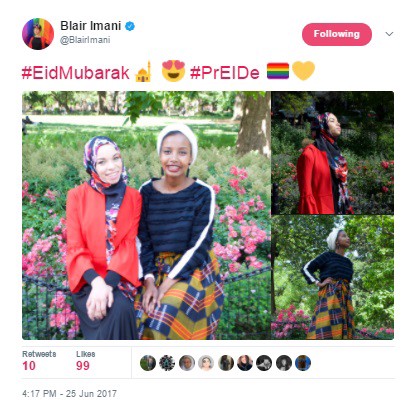 Alhamdullilah! I am happy, I am whole, I am loved. May everyone be able to live their truth! 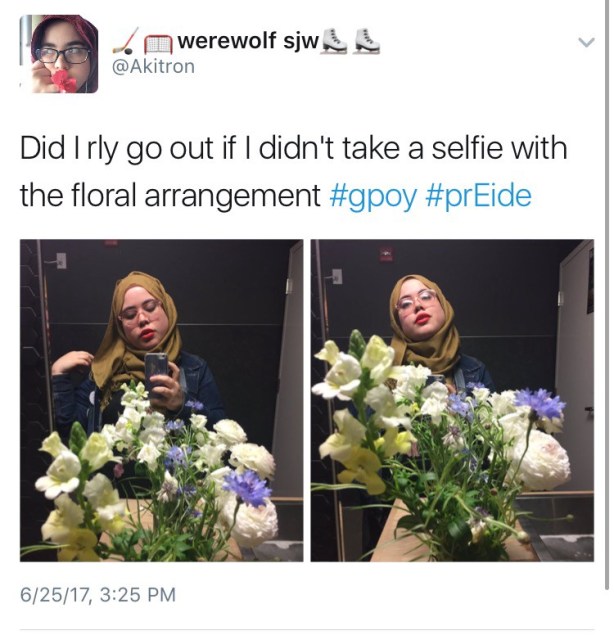 Images used with permission from @ Akitron

[This] community within a community is so lovely and has been wonderful to see!

As Sunday afternoon went on the hashtag party made its way over to Tumblr. More selfies, support and artwork poured into people’s feeds  —  some posts reaching thousands of notes within a few hours. 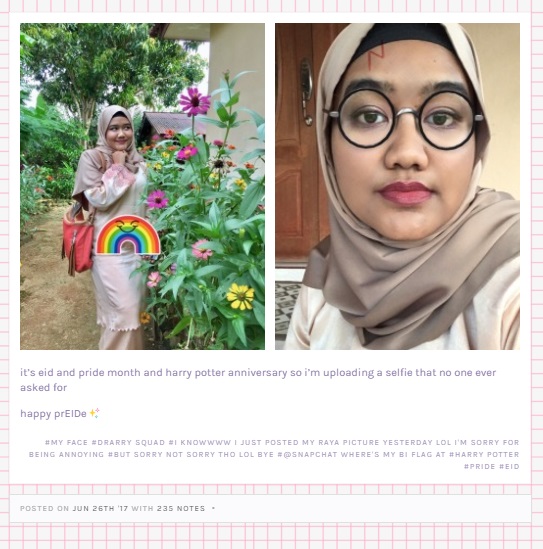 Eid is something I look forward every year because it means I’ll be going back to my hometown to visit relatives and friends, and since it falls on pride month I feel extra excited for this year’s Eid. It’s great to celebrate two events from a huge part of me. I’m a bisexual Muslim, and usually erased from any representation so prEIDe means a lot to me. 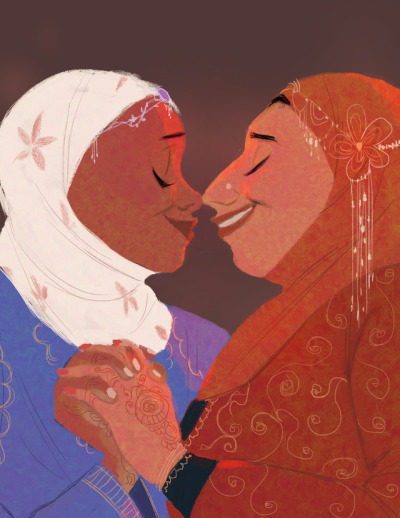 Artwork by Akshay B Varaham

I wanna say that it has been pretty hard for me this Ramadan coming out as trans to my family, but luckily I have a warm and accepting community around me outside of my family, so this illustration celebrating PrEIDe is my special gift to them.

Creating a platform for LGBTQ Muslims to share our stories and celebrate one another has been a critical source of community for those of us who often don’t have local support networks.

For some LGBTQ Muslims, public celebration of LGBTQ Muslim identity is a lifeline. A PrEIDe participant on Twitter (who preferred to remain anonymous for safety reasons,) Maryam writes:

For me PrEIDe was/is an eye opener. I still live in Jordan (a Muslim country against homosexuality or freedom in general) and I was always afraid of being who I am. The constant struggle of being a queer Muslim had been a nightmare to me till the end of 2016 when the Women March happened and I was virtually introduced to different LGBTQ Muslims on Twitter. It was an eye opener for me. I was like, okay, there are Queer Muslims. They also wear hijab and I can do that too. I wanted to have my own identity… I live in a very closeted community but I’m doing my best to open up and let people know who I am. On Sunday, when it was Eid and Pride at the same time, I saw those same people tweeting about PrEide. I saw their pictures, their hope, their sweetness. It felt like an Eid Miracle, and, with all honesty, I haven’t had a good Eid since 2002. It felt like by accepting myself, my identity, my beliefs; things started to get more clear for me. I was finally able to see the other side, hoping one day I’ll be able to leave this closeted harsh society I live in and join the love and kindness with the right people in the right places.

Life at the intersection of being queer and being Muslim isn’t always easy. Society is slowly shifting to make space for LGBTQ Muslims, but at the end of the day it isn’t enough. For LGBTQ Muslims, creating our own spaces and celebrating the beautiful weird complexity of our lives is critical to getting by in the world.

Since Islam uses a lunar calendar (gay), the dates for Ramadan change every year. But THE GOOD NEWS IS research confirms for both 2018 and 2019, Pride and Eid al-Fitr will be occurring side-by-side. That’s two more years to throw a giant party celebrating LGBTQ Muslims across the globe.

See you all next year! PrEIDe Mubarak!

Mahdia has written 4 articles for us.