Carmilla and Laura have returned to kiss the 2016 blues away, y’all. KindaTV dropped the first 17 episodes last night (act one of three) and I haven’t stopped thinking about them since. When we last left our Scooby Squad, Laura, Carmilla, and LaFontaine were trapped in the library, which is sentient but also like the TARDIS in that it isn’t contained to one place or time. They’ve been hiding in there for two months. Laura is crafting in the extreme, including embroidering Firefly dialogue on curtains and taping drawings of Harry, Ron and Hermione on mason jars so she can play the theme song. It’s pretty hilarious. 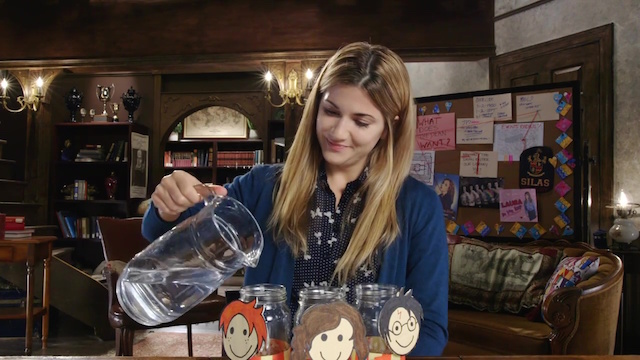 Meanwhile, the Dean (in Perry’s body) has been excavating the campus, opening the seven seals to hell because she’s an ancient god and she’s tired of people this year. Understandable. And let me just say, the Dean looks good. Yes, the Dean is evil but this could be Perry’s final form too. Her sharp blazers, no-nonsense attitude, and condescension make her so formidable. I love her. 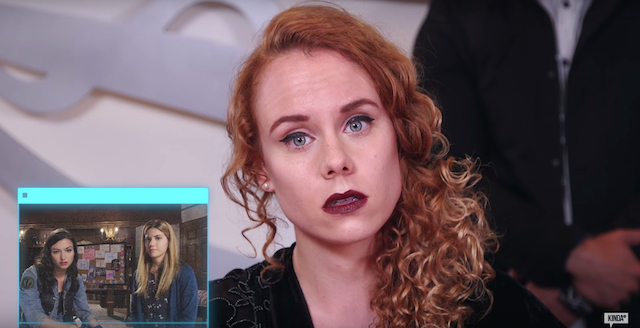 However, Laura doesn’t feel like saving the campus, let alone the world. After Danny, Kirsch, and Mattie were “killed” (they’re alive), she’s certain this will only end in failure too. This time, Laura is the one fantasizing about running away to Paris with Carmilla. But in the real world, things are complicated.

So, Carmilla and LaF have teamed up to stop the apocalypse. Carmilla wants to finally put an end to the Dean and LaF wants to save Perry and JP. With help from a magical pair of glasses, they figure out the Dean can be stopped by building a cage with four talismans. Of course these talismans are obscurely named, hidden, and require clues to find, much like horcruxes. They manage to find two of them: the Book of Lives, a sort of index of gods and spells; and the sword of Hastur. What they don’t know is that Mattie has the third Talisman, her locket, and she’s disappeared.

Unfortunately, they’re running out of time and they aren’t so safe in the library like they thought. Danny, who’s definitely now a vampire, and Theo show up to take the Book of Lives. But before Danny can force Carmilla to give it to her, Laura’s dad — aka Keith Mars(!) — barges in and incapacitates them with bear spray. 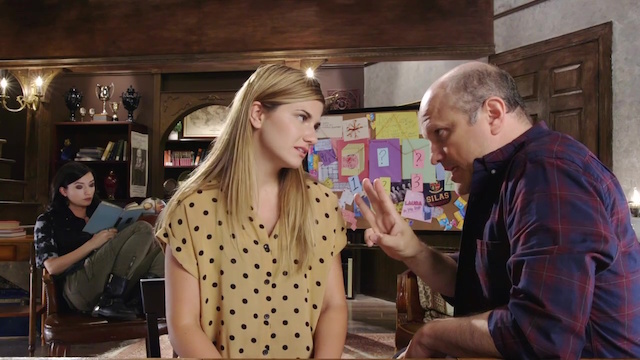 Okay, but Gossip Girl wasn’t Veronica at all; it was DAN HUMPHREY.

After Papa Hollis saw some of Laura’s videos, he traversed the Styrian mountains to grab Laura and take her home. Carmilla thinks it’s a good idea since Laura isn’t exactly being helpful. But Laura decides she wouldn’t be able to forgive herself if she left, and it’s not like she’ll be safe from hell on earth. Dad allows her to stay as long as he’s kept in the loop. And he kind of likes LaF and Carmilla anyway. I hope he’s stopped watching Laura’s videos, though, because things are about to get real steamy.

I’m talking about Laura and Carmilla. They aren’t together but they can’t just be friends either. Carmilla hasn’t forgiven Laura for the events of season two and Laura can’t forgive herself either. But she was angry that Carmilla told her to leave. They argue and call each other names but they have too many damned feelings so they go in for the kiss anyway. And what a kiss. 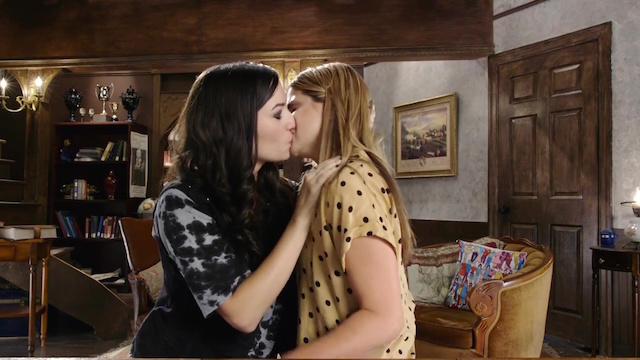 Later, since they still can’t find Mattie’s locket, Carmilla and Laura decide to summon the Dean’s sister, another ancient god who has the power to stop the Dean. Laura is happy she and Carmilla have stopped fighting and appreciates their problem-solving like good ol’ platonic buddies. Which lasts for about a second. Laura grabs and kisses Carmilla and they jump on the desk right before the screen blacks out due to “technical difficulties.” I screamed out loud.

Afterward Laura freaks out about it a little bit and decides to focus on the matter at hand: summoning the ancient god. But their summoning circle doesn’t work (they should have watched The Craft) (or read Witch Hunt). Carmilla looks discouraged when everybody else falls asleep. Mattie appears and asks who are they waiting for. And that’s the end of Act I.

I’m so happy to have Carmilla back. I hope 17 episodes can sustain you until Act II drops on September 29.