In the opening scene of Cameron Esposito and Rhea Butcher’s brilliant comedy series, Take My Wife, Cameron flops down on the bed and sighs, “I just want us to live!” The “us” is queer women and while she’s talking about the Bury Your Gays trope on TV, she’s also talking about just living. Queer women surviving. Queer women thriving. I’ve been thinking about Cameron Esposito a lot lately, actually, about how her career and her comedy and her activism seem to have taken on new life in the wake of Trump’s election.

Esposito has never shied away from talking about being gay. It’s the centerpiece of so much of her stand-up. But more and more recently it seems like she’s bringing her message in. You see it on Take My Wife, where the jokes are for us in a way that is at once familiar and fresh. (No one ever says the word U-Haul, for one merciful example). You see it on Twitter where she has stopped providing context for cis hetero people. You see it on Instagram where she transformed into Lesbian Ken. You see it on Getting in Bed With Kristin where she talks about queer women pulling each other together and up in their careers and freely offering the hope that she has earned from a lifetime of learning. Cameron Esposito has risen to the occasion of this frightening moment in our political landscape, with compassion and a whole lot of laughter. 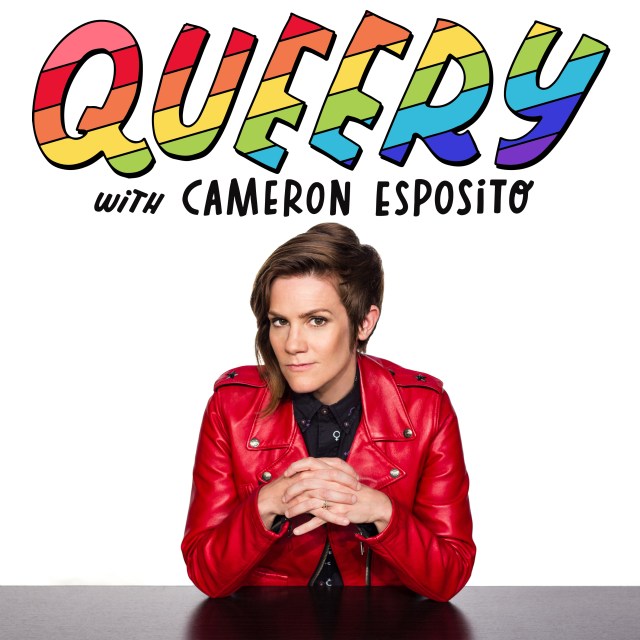 So it makes perfect sense that she’s decided to project her voice in a new way, with a podcast focusing on gender and sexual identity and the way those things intersect with our current culture. The podcast is called Queery and it launched yesterday with an episode that stars Rhea Butcher. It’s sweet and it’s funny and it’s smart and it feels made just for me and you, for right now.

Transparent creator and showrunner Jill Soloway is on the schedule, and so is Steven Universe creator and showrunner Rebecca Sugar. UnREAL‘s Jeffrey Bowyer-Chapman will be stopping by and Madin Lopez of ProjectQ and queer studies professor Andrea Fontenot. The podcast promises to skip the cliches and the questions you’ve asked and answered a thousand times, and focus on the kinds of conversations queer people have with each other when no one’s listening in. It also promises to be very, very funny.